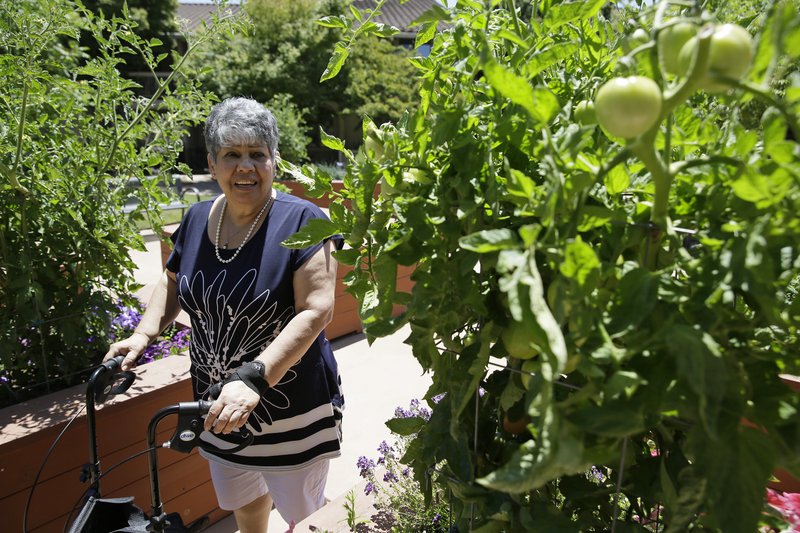 In this photo taken July 12, 2017, Cynthia Guzman walks through a garden outside her home in Napa, Calif. Guzman underwent a special kind of PET scan that can detect a hallmark of Alzheimer’s and learned she didn’t have that disease as doctors originally thought, but a different form of dementia. New research suggests those scans may lead to changes in care for people with memory problems that are hard to diagnose. (AP Photo/Eric Risberg)

Does it really take an expensive brain scan to diagnose Alzheimer’s? Not everybody needs one but new research suggests that for a surprising number of patients whose memory problems are hard to pin down, PET scans may lead to changes in treatment.

The findings, reported Wednesday, mark a first peek at a huge study under way to help determine if Medicare should start paying for specialized PET scans that find a hallmark of Alzheimer’s — a sticky plaque called amyloid.

Alzheimer’s is the most common form of dementia, and classic symptoms plus memory tests often are enough for a reliable diagnosis. But unusual symptoms could mark another form of dementia that, while there are no cures, could require different symptom care. And on the other end of the spectrum, it’s hard to tell if mild memory loss might be an early Alzheimer’s signal, a more treatable condition such as depression, or even age-related decline.

“We’re not accurate enough,” said Dr. Gil Rabinovici of the University of California, San Francisco, who is leading the new research.

“Patients know there’s something wrong. Often they can sense in their gut that it’s not normal aging,” he added. Without a clear-cut test, “doctors are very reluctant to make the diagnosis in many cases.”

Until a few years ago, amyloid build-up could only be seen during autopsies. Older types of PET scans show what region of the brain appears most affected, of limited help.

Yet it’s not clear how best to use the new amyloid-detecting scans, which can cost up to $6,000. They can rule out Alzheimer’s if there’s little amyloid. But cognitively healthy seniors can harbor amyloid, too, and Medicare won’t pay for the new scans outside of a few research studies.

One of those is the IDEAS study, which is testing the impact of amyloid-detecting PET scans in more than 18,000 Medicare beneficiaries. To enroll, patients either must have atypical dementia with an unclear cause — or have particularly puzzling “mild cognitive impairment,” or MCI, early memory problems that raise the risk of later developing dementia. Researchers check if doctors’ initially recorded treatment plans — medications, counseling or additional testing — were altered by patients’ PET results.

That happened in about two-thirds of the cases, according to preliminary findings from nearly 4,000 patients who were the first to enroll.

Most changes involved medications that can temporarily ease Alzheimer’s symptoms, said Rabinovici, who presented the findings at the Alzheimer’s Association International Conference in London. The PET scans found 70 percent of the dementia patients indeed had amyloid build-up, pointing out those who might benefit from those drugs and those who won’t.

More intriguing, just 54 percent of the MCI patients had amyloid build-up, putting them at higher risk for later Alzheimer’s. For the rest, “Alzheimer’s disease was effectively ruled out, so it’s something else,” Rabinovici said.

But the Centers for Medicare and Medicaid Services helped plan the research and insisted on this midpoint check to be sure the study should continue, said Maria Carrillo, the Alzheimer’s Association’s chief medical officer. Researchers also will compare the 18,000 study participants with Medicare records of similar patients who didn’t get PET scans, seeking final evidence of benefit.

“To get that right diagnosis, that’s really important,” said Cynthia Guzman of Napa, California, whose initial Alzheimer’s diagnosis was ruled out in an earlier PET scan study.

Guzman had unusual fluctuating memory problems. Some days she functioned normally. Others, she’d stop her car at a stop sign without knowing how she got there or where she was going. Eventually, tremors and hallucinations led specialists to conclude she has Lewy body dementia. Knowing, Guzman said, has allowed her to avoid a list of common medications that could worsen her symptoms.

While any treatment changes today may be modest, researchers are hunting drugs that eventually might at least slow Alzheimer’s rather than just treat symptoms, more impetus for a precise diagnosis.

“We all hope for a day when this will be critically important,” said Dr. Richard Hodes, director of the National Institute on Aging, who wasn’t involved with the IDEAS study.

For now, in addition to people who qualify for the IDEAS study, the Alzheimer’s Association and Society of Nuclear Medicine and Molecular Imaging say:

—Unusually young dementia patients, younger than 65, also might be candidates for a PET scan.

—The scans shouldn’t be used as a screening tool for people without symptoms or who worry they’re at risk.

—Nor are they for people who can be diagnosed by standard means, or to determine disease severity.