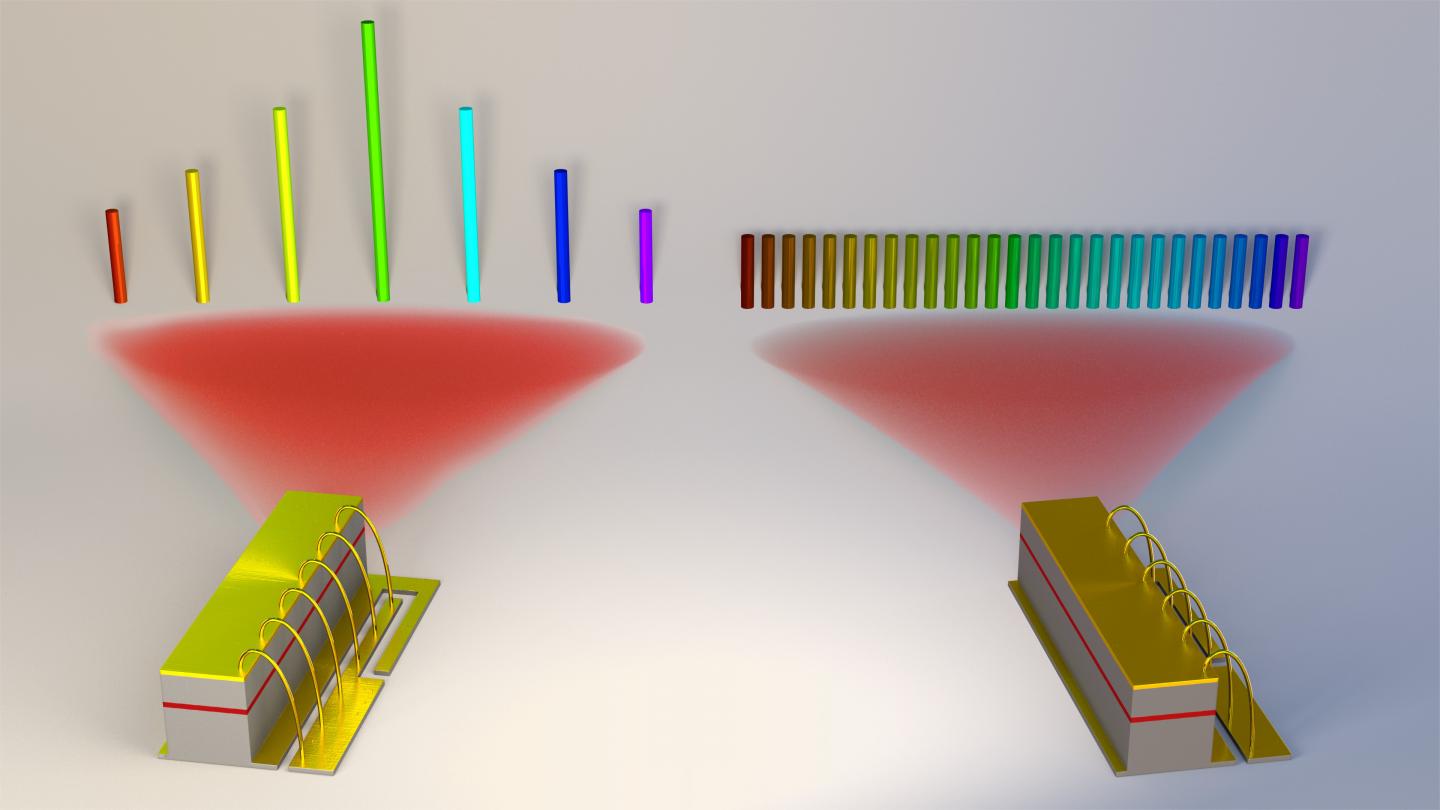 This is an image of optical frequency combs generated in quantum cascade lasers. The discovered harmonic comb regime produces a spectrum with an intermodal spacing that is 10 to 100 times larger than that observed in fundamental frequency combs (right) enabling completely new applications in this platform. Both types of frequency combs can be generated using the same type of device. Source: (Image courtesy of Jared Sisler/Havard SEAS)

Now, researchers at the Harvard John A. Paulson School of Engineering and Applied Sciences (SEAS) are exploring the possibility of using an infrared frequency comb to generate elusive terahertz frequencies. These frequencies — which lie in the electromagnetic spectrum between radio waves and infrared light — have long promised to transform communications and sensing but are very challenging to source. By harnessing a recently discovered laser state, SEAS researchers have discovered an infrared frequency comb in a quantum cascade laser that offers a new way to generate terahertz frequencies.

Dubbed a harmonic frequency comb, this new system produces a spectrum of teeth with spacing tens of times larger than traditional frequency combs. The large but precise spacing allows these modes of light to beat together to produce extremely pure terahertz tones.

The research is described in Nature Photonics.

“The discovery of the harmonic state of quantum cascade lasers is surprising from a laser physics point of view,” said Federico Capasso, Robert L. Wallace Professor of Applied Physics and Vinton Hayes Senior Research Fellow in Electrical Engineering and senior author of the paper. “Until recently, it was thought that multimode lasers would normally lase on all the possible frequencies of the cavity. In the harmonic state, many cavity frequencies are skipped. Even more remarkable is that this discovery opens up unforeseen opportunities in unused regions of the electromagnetic spectrum, the terahertz.”

In traditional frequency combs, teeth are separated by a small frequency dictated by the characteristic length of the laser cavity — meaning teeth sit close together. The harmonic frequency comb, however, can use a larger multiple of that frequency.

“With this new comb regime we can bypass the strict limitations set by the cavity length and reach an unprecedented degree of flexibility in the realm of quantum cascade laser frequency combs,” said Marco Piccardo, a postdoctoral fellow in the Capasso lab and co-first author of the paper.

Key to the research was proving that these largely-spaced teeth were indeed equidistant. Using another reference comb, the team was able to study the harmonic frequency comb spectrum at very high resolution.

“We show that the lines are equidistant with an uncertainty of only 300 hertz, that quantifies the relative precision of this measurement to five parts per trillion,” said Dmitry Kazakov, a visiting research intern in the Capasso group and co-first author of the paper. “It is as if one could measure the distance from Earth to the Moon and be off by less than the thickness of a human hair.”

Most current terahertz generators use large, complex optical systems operating at near zero-temperatures to produce terahertz frequencies. The harmonic frequency comb operates at room temperature, uses commercial quantum cascade lasers, and is self-starting, meaning that the laser can automatically switch to this regime when electrical current is injected into the device.

“This opens up completely new applications for frequency combs, especially in wireless communications,” Capasso said. “We foresee that in the near future this comb regime will enable a new class of chip-scale modem operating at terahertz frequencies, accommodating the ever-increasing consumer demand for high data rate digital communication.”