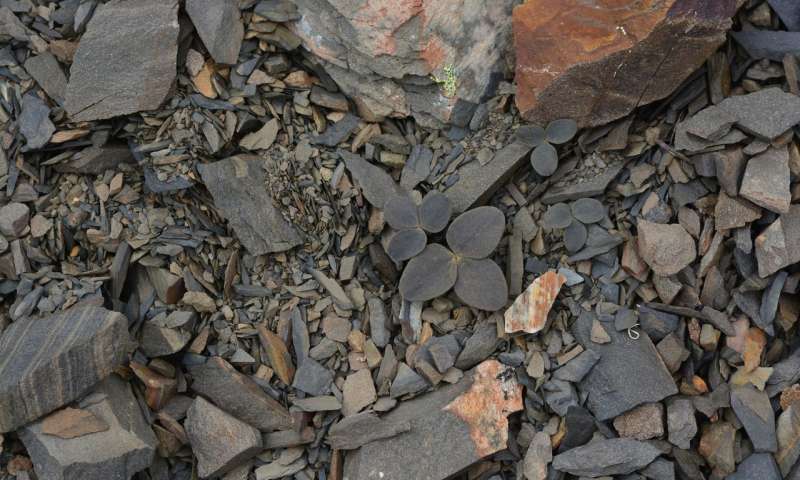 Plants use many of the same methods as animals to camouflage themselves, a new study shows.

Research on plant camouflage is limited compared to the wealth of knowledge about how animals conceal themselves.

But a review by scientists from the University of Exeter and the Kunming Institute of Botany (Chinese Academy of Sciences) found plants use a host of techniques long known to be used by animals.

These include blending with the background, “disruptive colouration” (using high-contrast markings to break up the perceived shape of an object) and “masquerade” (looking like an unimportant object predators might ignore, such as a stone).

“It is clear that plants do more than entice pollinators and photosynthesise with their colours—they hide in plain sight from enemies too,” said Professor Martin Stevens, of the Centre for Ecology and Conservation on Exeter’s Penryn Campus in Cornwall.

“From ‘decoration’, where they accumulate things like dust or sand on their surface, to disruptive coloration, they use many of the same methods as animals to camouflage themselves.

“We now need to discover just how important a role camouflage has in the ecology and evolution of plants.”

One species that uses masquerade camouflage is Corydalis hemidicentra, a plant whose leaves match the colour of rocks where it grows.

“These plants are a wonderful example of how camouflage can be adapted for different habitats,” said first author Dr. Yang Niu, of the Kunming Institute of Botany (Chinese Academy of Sciences) and Exeter.

“Different populations of this species look different in different places.

“We can’t yet be certain about how they do this. The adaptations might happen in the long term by evolution.

“It seems that plants like these know how to make the right colours by mixing a few types of pigments. Those individuals with worse colour matching might have higher risk of being eaten.”

Professor Hang Sun, also of the Kunming Institute of Botany, added: “We noticed that just in the alpine region of south-west China, camouflage has evolved in plants from more than 15 families.”

Examples of camouflage methods apparently used by both plants and animals include:

Unlike animals, plants may be limited in their use of camouflage by the fact that chlorophyll—which they need to live via photosynthesis—is green.

As a result, the researchers say it may sometimes be a disadvantage to a plant to be any other colour—meaning their camouflage comes at a cost.

“Animal camouflage has provided scientists with arguably the best examples of evolution in action,” said Professor Stevens. “It has been widely studied since the first pioneers of evolutionary biology, but relatively little research has been done into plant camouflage.

“Plants give us a fascinating parallel way of understanding how evolution works.”

The paper, published in the journal Trends in Ecology and Evolution, is entitled: “Plant camouflage: ecology, evolution, and implications.”