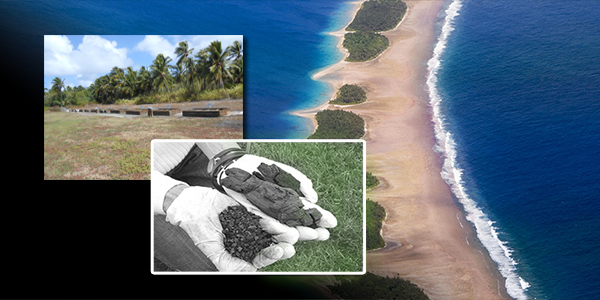 Lawrence Livermore National Laboratory (LLNL) researchers have conducted a series of laboratory and field experiments that explore the effects of adding biochar, a porous charcoal that looks like black landscaping bark, to the soil to limit the cesium (Cs) uptake into foods grown in the Marshall Islands.

From 1946 to 1958, the United States tested 67 nuclear weapons at Bikini and Enewetak Atoll in the northern Marshall Islands. As a result, the radioactive fallout contaminated the area.

Lawrence Livermore scientists continue to provide radiological protection monitoring of local inhabitants and the environment in the Marshall Islands. Key program research directives are to build a strong technical and scientific foundation to help support safe and sustainable resettlement programs and improve food safety and security.

To stop the transfer of cesium-137 (a fission product from the nuclear tests) into the food chain, the team added biochar to soil on the islands to help reduce the soil-to-plant uptake.

Scientists have learned a great deal about the unique behavior of fallout radionuclides in coral soils and their routes for human exposure. The largest contributor to radiation doses from exposure to residual fallout contamination in the Marshall Islands comes from cesium-137, a fission product that is taken up by plants and transferred through the terrestrial food-chain. For example, coconut crabs form an important and prized source of food in the Marshall Islands and, in certain locations, have been found to contain above average concentrations of cesium-137. Residual amounts of cesium-137 in the soil also contribute most to the external dose rate.

Pyrogenic carbon (Cpyro), commonly known as biochar or Terra Mulata, is a porous charcoal that is made from partial carbonization of plant and waste biomass through pyrolysis. The use of biochar in agriculture dates back to between 450 BC and 950 AD, forming part of the ancient Amazonian dark earth soils distribution. Biochar is extremely stable in soil and is known to greatly improve the productivity of plants.

Biochar also is being explored as a carbon-negative pathway for semi-permanent storage of atmospheric carbon dioxide (CO2). Previous studies show that biochar has a high capacity to absorb heavy metal and organic pollutants from soil.

“Our interest is focused on assessing the potential impacts of dietary change on radiation exposure, but with a clear view that our work may be of value in terms of demonstrating that biochar may improve the fertility and water holding capacity of coral soils,” Hamilton said. “Biochar also may help with the effects of sustained droughts and climate change in the Marshall Islands.”

Coral atoll soils are largely composed of calcium, magnesium and carbonates with variable quantities of organic matter. Most coral soils are deficient in potassium (K) and generally lack many other essential trace elements and micronutrients to support sustainable cultivation of food plants. Horticultural practices also are constrained by the low water holding capacity of sandy coral soil. The K deficiency and absence of clay minerals yield to conditions that enhance the uptake of cesium-137 (137Cs) into plants similar to that found in peat and other rich organic soils.

Transfer factor values of 137Cs from soil-to-plant for most tree-crop foods such as coconut, breadfruit and fruit in the Marshall Islands typically range between 1 and 40 (a relative measure of the amount of 137Cs taken up from soil into different types of plants). Measured transfer factor values for vegetables and grains are more variable and have been known to exceed 100. By comparison, transfer factor values for similar types of plants growing in continental mineral soils typically range from about 0.004 to 0.5 or several orders of magnitude less that those observed in the Marshall Islands.

The team concluded from laboratory tracer experiments that the addition of biochar as a soil amendment may not only be beneficial in terms of helping improve the fertility and water retention capacity of coral soil, but provide a mechanism for sequestration of Cs ions that might otherwise transfer across root membranes to the fruiting body of plant foods.

“Biochar also may act to help satisfy the nutritional requirements of plants and further reduce the soil-to-plant uptake of 137Cs by providing a sustainable source of available potassium without the need for the addition of large amounts of chemical fertilizers,” Hamilton said. “Upon further research and testing, the use of biochar for radionuclide remediation may not only be useful in the Marshall Islands, but extend to other contaminated sites such as Fukushima.”