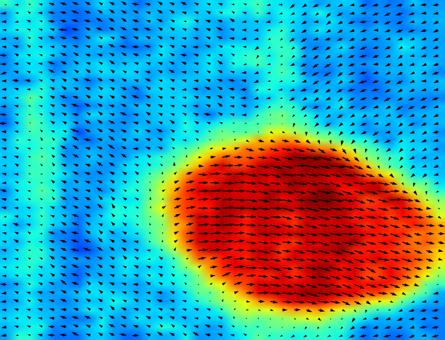 Chemists from the University of Pennsylvania are enabling the next generation of research into ferroelectric materials. In a new study, published in Nature, they demonstrate a multiscale simulation of lead titanate oxide that provides new understanding about what it takes for polarizations within these materials to switch. Their simulations show that thermal fluctuations are responsible for the first nuclei from which changes in polarization spread. Source: University of Pennsylvania

Ferromagnetic materials, like compass needles, are useful because their magnetic polarization makes them rotate to align with magnetic fields. Ferroelectric materials behave in a similar way but with electric, rather than magnetic, fields. That external electric fields can reorient the electric polarization of these materials makes them ideal for certain memory applications, such as stored-value cards used in mass-transit systems. Since changes in their polarization cause such materials to physically change shape and vice-versa, a phenomenon known as piezoelectricity, ferroelectrics are also crucial “smart materials” for a variety of sensors, such as ultrasound machines and probe-based microscopes. They could even be used as nanoscale motors.

Chemists from the University of Pennsylvania are enabling the next generation of research into ferroelectric materials. In a new study, published in Nature, they demonstrate a multiscale simulation of lead titanate oxide that provides new understanding about what it takes for polarizations within these materials to switch.

This mathematical model, which is built up from the principles of quantum mechanics rather than being derived from physical experiments, will undergird efforts to find and design new ferroelectric materials to specification.

The research was conducted by Andrew M. Rappe, the Blanchard Professor of Chemistry in the School of Arts & Sciences, along with lab members Shi Liu and Ilya Grinberg.

Despite proliferation in commercial applications, there are many gaps in the theoretical principles that explain the behavior of ferroelectric materials. One such gap is in understanding how discrete regions of differing polarizations, known as domains, interact at their boundaries, or domain walls.

The ferroelectric material Rappe and his colleagues simulated features titanium ions inside six-pointed octahedral “cages” of oxygen ions. The polarization of a given domain is determined by which points of the cages the titanium ions move toward.

“If you apply an electric field that’s opposite to the direction of the metal atoms’ alignment,” Rappe said, “they want to move and align with the electric field, but they also feel social pressure from their neighbors to stay the same as each other. That means it takes a lot energy for them all to flip their alignment direction at the same time.

“It also means that, generally, most of the flipping happens at domain walls. At walls, there’s already some up and some down, so the ones that are the wrong way to the electric field can deviate from half their neighbors but join the other half of their neighbors and flip.”

Domain walls therefore “move” across ferroelectric materials like wildfire, with domains that align with external electric fields growing as they convert neighbors. Unlike fire, however, the movement of domain walls can be easily stopped: they hold their position once the electric field is removed. This phenomenon is critical to ferroelectric applications, since the state of the material remains stable until a new field is applied.

The Rappe group’s research is the first to show that mathematical models calibrated to quantum mechanics can accurately relate the strength of the electric field to the speed at which domain walls move.

The researchers used their simulation to predict the shape of the material’s hysteresis loop, the graph that describes the amount of energy necessary to switch it from one polarization and then back. Comparing their predictions to data from previous physical experiments validated the Penn team’s approach.

Their simulations show that thermal fluctuations are responsible for the first nuclei from which changes in polarization spread. Increasing the strength of the electric field reduces the size of the nucleus needed to start this process, making it easier to begin.

This finding proves that the initial barrier to increasing the acceleration of a domain wall does not have to do with the presence of defects, or pockets of physical disorder within the crystal. That mechanism was hypothesized to explain why the rate of observed domain wall motion began slow, accelerated and then tapered off again. Explaining this behavior through purely quantum mechanical principles means that materials scientists do not need to strive for exceptional crystalline purity when designing ferroelectric devices.

The Rappe group’s simulations also show that the process by which one domain converts to another is largely independent of the specific orientations of the two neighboring domains. Previous work, including by the Penn team, assumed that neighboring orientations that are 180 degrees apart, such as up-to-down, would switch by a different mechanism than ones that were 90 degrees apart, such as up-to-left. Their simulations now show that the same universal mechanism governs the motion of all types of domain walls.

Such more fundamental understanding of this phenomenon is necessary for designing piezoelectric devices that rely on precise, repeatable shape changes. Having a ferroelectric material drive the aperture of the lens on a smartphone camera, for example, would require designers to be confident that the material’s physical response to polarization changes is consistent over many thousands of cycles.

The Rappe group’s study is in line with the Materials Genome Initiative, a White House program that supports research into the design of new materials, including through computational approaches. Such approaches are necessary for moving new ferroelectrics out of laboratories and into the world at large, whether it is by finding the right material for a given application, or finding new applications based on the unique properties of hypothetical materials that would conform to the fundamental principles revealed by the Penn team’s simulation.

“A key first step in materials design,” Rappe said, “is developing some physical understanding of how things work, and we provide that. This research is allowing us to start to do materials design of domain-wall-based devices.

“There are many materials where the domain wall conducts electricity, but the bulk material does not, for example. In that case, you could apply an electric field to move the wall, and it would be like moving the position of a wire within the material. You could imagine a stack of these materials that only conduct electricity when they all line up and even being able to reprogram a circuit or make some sort of logic element that way.”