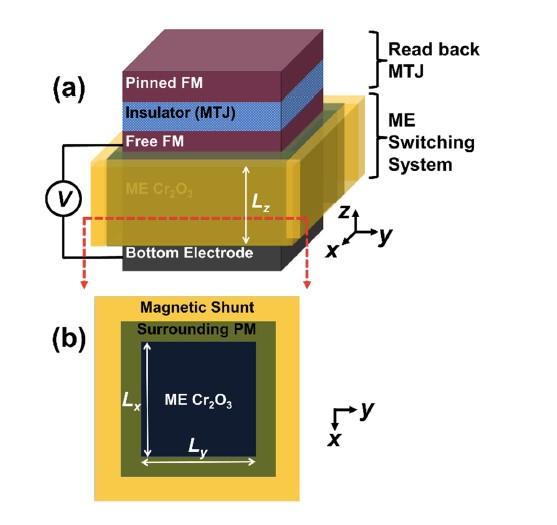 This image shows the (a) side and (b) overhead views of the proposed switching element show the chromia at the center, surrounded by a magnetic shunt to block magnetic fields, and the read head on top. Credit: Ahmed and Victora

As computers feature increasing amounts of memory packed into smaller and smaller devices, companies are struggling to reduce the memory components as quickly as needed in an energy-efficient manner.

Researchers from the American Institute of Physics have developed a new switching element from chromia (Cr₂O₃) that could be scaled down to be used in computer memory and flash drives.

“The device has better potential for scaling, so it could be made smaller, and would use less energy once it’s suitably refined,” Randall Victora, a researcher at the University of Minnesota and an author on the paper, said in a statement.

Computer memory is composed on switching elements—tiny devices that can switch on and off to store bits of information as ones and zeros. Chromia was previously found to include magnetoelectric properties that could be switched with only an electric field. However, this process requires the presence of a static magnetic field.

In the new study, the researchers created a design for a memory device with a heart of chromia that does not require any externally applied magnetic field to operate, by surrounding chromia with magnetic material. This technique provides an effective magnetic field through quantum mechanical coupling to chromium magnetic moments, while enabling devices to be arranged in a way that blocks stray magnetic fields from affecting nearby devices.

An element to read out the state of the device, to determine if it’s in one or zero state, is placed on top of the device, which could potentially pack more memory into a smaller space due to the interface between chromia and the magnetic.

As the device grows smaller, the greater surface area of the interface relative to its volume improves the operation. This property is an advantage over conventional semiconductors, where increases in surface area as size shrinks lead to greater charge leakage and heat loss.

The researchers now plan to work with chromia to build and test a nonvolatile device that could potentially replace dynamic random access memory (DRAM) in computers, which because of volatility, often lose information once the power source is interrupted.

“DRAM is a huge market,” Victora said. “It provides the fast memory inside the computer, but the problem is that it leaks a lot of charge, which makes it very energy-inefficient.”

While the researchers are hopeful, creating such a device will require overcoming significant heat tolerance limitations. Modeling predicts that the device would stop functioning around 30 degrees Celsius.

One possibility is to optimize the chromia by doping it with other elements to improve its functioning and make it more suitable to replace existing memory devices.