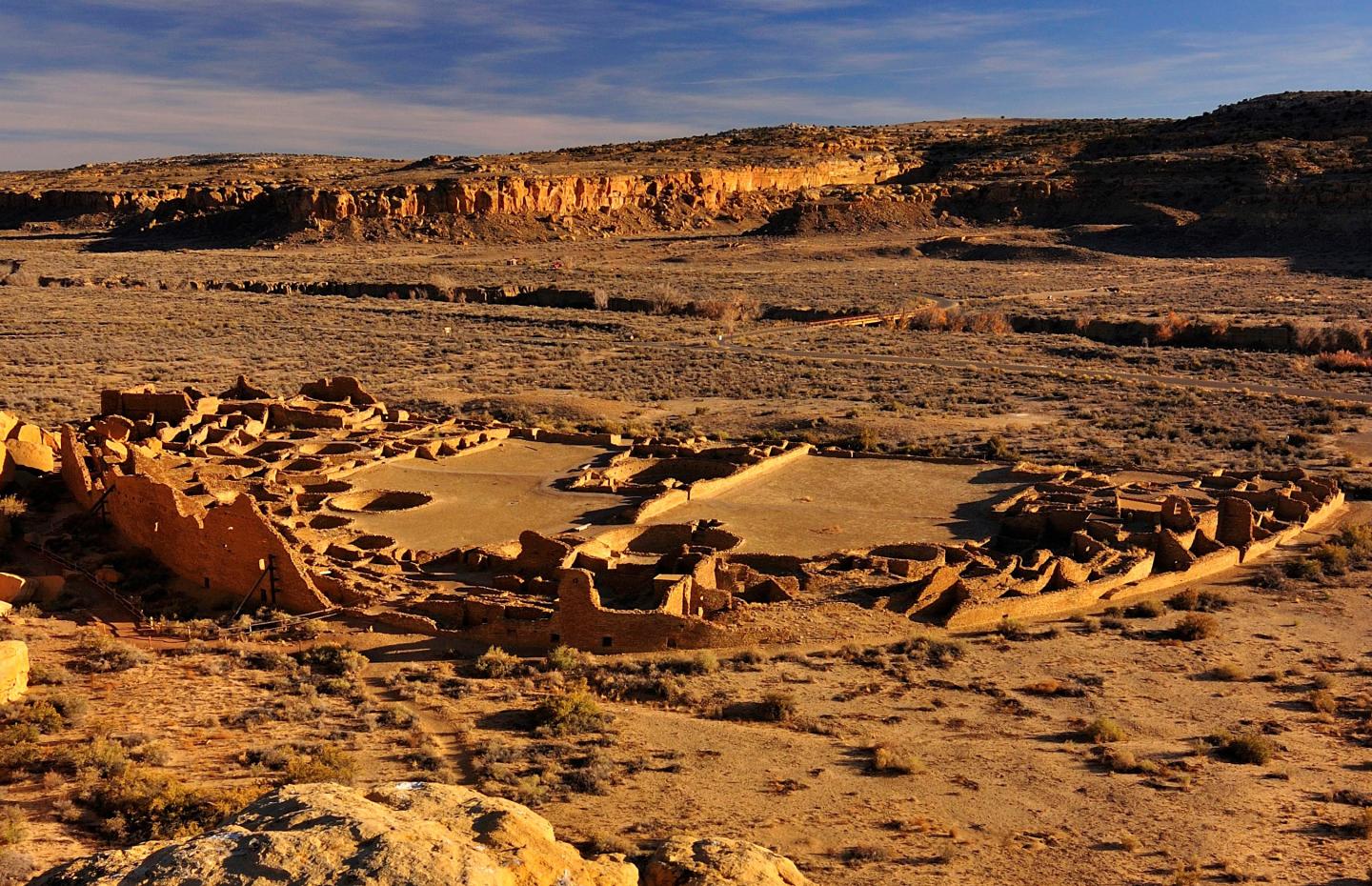 WSU scientists use data from archaeological sites like the 1,200-year-old Pueblo Bonito in Chaco Canyon, N.M., to study how ancient peoples adapted to climate change in the American Southwest. Source: Nate Crabtree

Washington State University archaeologists are at the helm of new research using sophisticated computer technology to learn how past societies responded to climate change.

Their work, which links ancient climate and archaeological data, could help modern communities identify new crops and other adaptive strategies when threatened by drought, extreme weather and other environmental challenges.

In a new paper in the Proceedings of the National Academy of Sciences, Jade d’Alpoim Guedes, assistant professor of anthropology, and WSU colleagues Stefani Crabtree, Kyle Bocinsky and Tim Kohler examine how recent advances in computational modeling are reshaping the field of archaeology.

“For every environmental calamity you can think of, there was very likely some society in human history that had to deal with it,” said Kohler, emeritus professor of anthropology at WSU. “Computational modeling gives us an unprecedented ability to identify what worked for these people and what didn’t.”

Kohler is a pioneer in the field of model-based archaeology. He developed sophisticated computer simulations, called agent-based models, of the interactions between ancestral peoples in the American Southwest and their environment.

He launched the Village Ecodynamics Project in 2001 to simulate how virtual Pueblo Indian families, living on computer-generated and geographically accurate landscapes, likely would have responded to changes in specific variables like precipitation, population size and resource depletion.

By comparing the results of agent-based models against real archeological evidence, anthropologists can identify past conditions and circumstances that led different civilizations around the world into periods of growth and decline.

Agent-based modeling is also used to explore the impact humans can have on their environment during periods of climate change.

One study mentioned in the WSU review demonstrates how drought, hunting and habitat competition among growing populations in Egypt led to the extinction of many large-bodied mammals around 3,000 B.C. In addition, d’Alpoim Guedes and Bocinsky, an adjunct faculty member in anthropology, are investigating how settlement patterns in Tibet are affecting erosion.

“Agent-based modeling is like a video game in the sense that you program certain parameters and rules into your simulation and then let your virtual agents play things out to the logical conclusion,” said Crabtree, who completed her Ph.D. in anthropology at WSU earlier this year. “It enables us to not only predict the effectiveness of growing different crops and other adaptations but also how human societies can evolve and impact their environment.”

Species distribution or crop-niche modeling is another sophisticated technology that archeologists use to predict where plants and other organisms grew well in the past and where they might be useful today.

Bocinsky and d’Alpoim Guedes are using the modeling technique to identify little-used or in some cases completely forgotten crops that could be useful in areas where warmer weather, drought and disease impact food supply.

One of the crops they identified is a strain of drought-tolerant corn the Hopi Indians of Arizona adapted over the centuries to prosper in poor soil.

“Our models showed Hopi corn could grow well in the Ethiopian highlands where one of their staple foods, the Ethiopian banana, has been afflicted by emerging pests, disease and blasts of intense heat,” Bocinsky said. “Cultivating Hopi corn and other traditional, drought-resistant crops could become crucial for human survival in other places impacted by climate change.”

In a paper published in 2015, d’Alpoim Guedes and Bocinsky found that foxtail and proso millet, which fell out of cultivation on the Plateau 4,000 years ago as the climate got colder, could soon be grown there again as the climate warms up.

“These millets are on the verge of becoming forgotten crops,” d’Alpoim Guedes said. “But due to their heat tolerance and high nutritional value, and very low rainfall requirements, they may once again be useful resources for a warmer future.”

With hundreds of years of anthropological data from sites around the world yet to be digitized, scientists are just beginning to tap the potential of archaeology-based modeling.

“The field is in the midst of a renaissance toward more computational approaches,” Kohler said. “Our hope is that combining traditional archaeology fieldwork with data-driven modeling techniques will help us more knowledgeably manage our numbers, our ecosystem interactions and avoid past errors regarding climate change.”