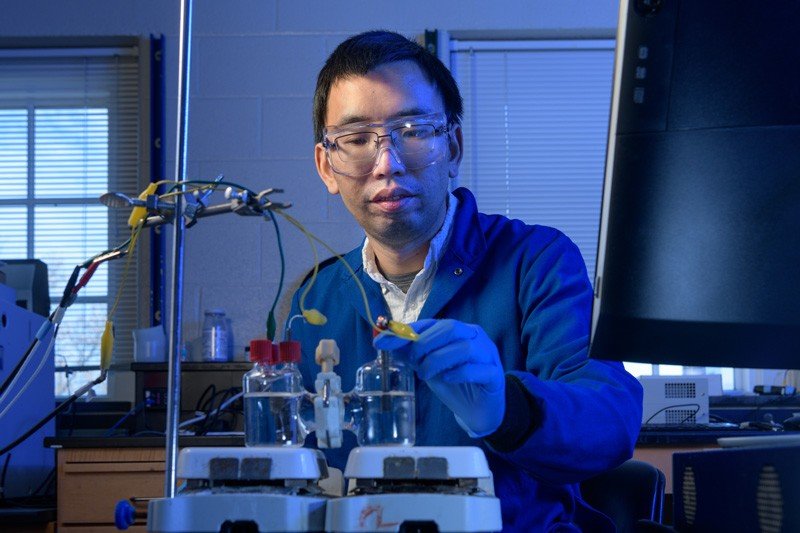 Feng Jiao, an associate professor of chemical and biomolecular engineering and associate director of the Center for Catalytic Science and Technology at UD, in his lab. Credit: University of Delaware.

Scientists may have finally found a way to use hydrogen as a clean, sustainable energy source.

Researchers from the University of Delaware have patented a new process to produce green hydrogen from water using a copper-titanium catalyst and electricity.

After researching ways to develop processes that convert carbon dioxide into beneficial chemicals like ethanol and ethylene, the research team developed an efficient system that turns carbon dioxide to oxygen. However, they needed a better catalyst to drive the reaction.

The researchers tested various metals, discovering unexpectedly that a copper-titanium alloy is one of the few non-precious, metal-based catalysts that splits water into hydrogen gas and oxygen. Because both copper and titanium are inexpensive and relatively available, a copper-titanium catalyst is advantageous over a precious metal like silver and platinum that are both expensive and scarce.

Hydrogen is currently produced by using steam-methane reforming—a process where natural gas and high heat free hydrogen molecules from methane. However, the byproduct of this process is generally carbon in the form of carbon dioxide.

“So, you can produce hydrogen cheaply, but at an environmental cost—carbon dioxide emissions,” University of Delaware engineer Feng Jiao said in a statement.

Copper is known to be good for conducting both heat and electricity, making it an obvious choice for electrical wiring. However, copper cannot effectively produce hydrogen on its own.

The addition of a small amount of titanium paves the way for a useful catalyst, because when they are paired together, the two metals create active sites that facilitate the strong interactions between the hydrogen atoms and the catalysts surface in a way that is comparable to the performance of more expensive platinum-based catalysts.

“With a little bit of titanium in it, the copper catalyst behaves about 100 times better than copper alone,” Jiao said.

According to Jiao, traditional chemical processes generally start with fossil fuels like coal or gas and add oxygen to produce various chemicals. However, with hydrogen the reverse chemical reaction is feasible.

“We can start with the most oxidized form of carbon—carbon dioxide—and add hydrogen to produce the same chemicals, which has a lot of potential for reducing carbon emissions,” Jiao said.

Every time Jiao and his team invent a process, they perform a life cycle analysis to evaluate the economics of how the technology compares to other methods.

The copper-titanium catalysts produces hydrogen energy from water more than two times higher than the current state-of-the-art platinum catalyst in early testing. The process also can operate at almost room temperature, meaning that the catalyst’s energy efficiency is increased, while the overall capital cost of the system is decreased.

While they have filed a patent application for the process, the researchers plan to scale the process for commercial applications to achieve bigger savings.

They also plan to test the catalyst’s stability and explore different combinations of metals to increase the performance and lower the cost.

The study was published in ACS Catalysts.