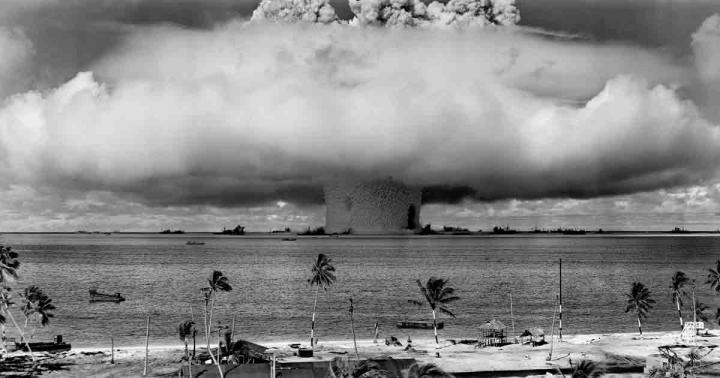 Atomic bomb tests at Bikini Atoll between 1946 and 1954 left a legacy of radioactivity in the region.Source: US Department of Defense

More than 70 years after the U.S. tested atomic bombs on a ring of sand in the Pacific Ocean called Bikini Atoll, Stanford researchers are studying how long-term radiation exposure there has affected corals that normally grow for centuries without developing cancer.

Atomic bomb tests at Bikini Atoll between 1946 and 1954 left a legacy of radioactivity in the region. (Image credit: U. S. Department of Defense)

“The terrible history of Bikini Atoll is an ironic setting for research that might help people live longer,” said Stephen Palumbi, the Harold A. Miller Professor of Marine Science. “By understanding how corals could have recolonized the radiation-filled bomb craters, maybe we can discover something new about keeping DNA intact.”

Humans and many other animals exposed to radiation often develop DNA mutations in fast-dividing tissues that can result in cancer. Yet somehow, fast-growing coral in Bikini Atoll appear unharmed by the high levels of radiation found there. Palumbi and biology graduate student Elora López hope to better understand how the coral colonies withstand the high levels of radiation by sequencing their DNA and measuring rates and patterns of mutations.

The researchers’ work is featured in today’s (June 28) episode of “Big Pacific,” a five-week PBS series about species, natural phenomena and behaviors of the Pacific Ocean. The episode explores, among other stories, the historic fallout of 23 atomic bomb tests in the most northern of the Marshall Islands, located roughly halfway between Hawaii and Japan. The blasts, detonated in the years between 1946 and 1954, exposed corals and other species to persistent, high levels of radioactivity. A film crew captured Palumbi and López diving in a hydrogen bomb crater, chasing radioactive crabs, sampling giant corals and witnessing something only reported once before – possibly mutant sharks missing their second dorsal fin.

Beyond coral, López and Palumbi aim to understand how Bikini’s larger ecosystem continues to thrive in terms of biodiversity and to expose any hidden genetic damage. To that end, López, the project’s leader, decided to also look at platter-size crabs that eat coconuts filled with a radioactive isotope from groundwater. How do the crabs survive, grow and reproduce with such a burden of radioactivity? To answer this and other questions about radiation’s genetic impacts, López and Palumbi will also compare their species samples with specimens collected on Bikini by Smithsonian Institution researchers just before the atomic tests.

“We should never forget what we did to Bikini Atoll and its people,” López said. “We should learn everything we can from it, even things we would have never have thought of before.”