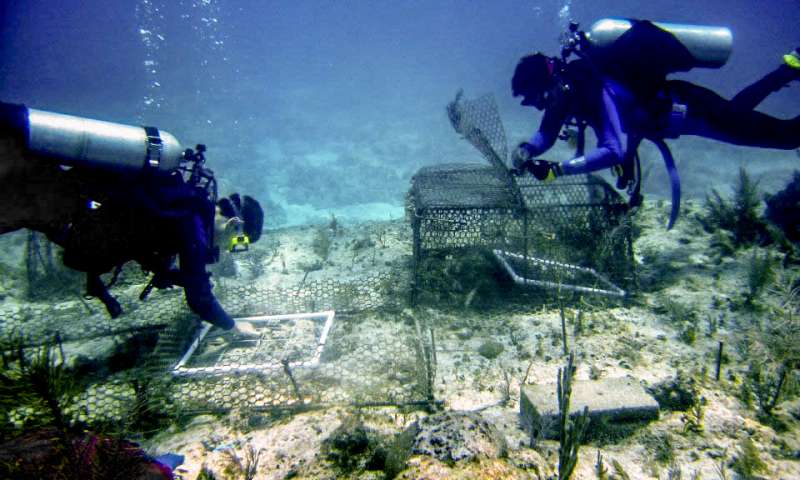 Coral reefs are declining around the world because a combination of factors—overfishing, nutrient pollution, and pathogenic disease—ultimately become deadly in the face of higher ocean temperatures, researchers have concluded.

A study published today in Nature Communications, based on one of the largest and longest field experiments done on this topic, suggests that the widespread coral deaths observed in recent decades are being caused by this combination of multiple local stressors and global warming.

These forces greatly weaken corals, and allow opportunistic pathogens to build to such levels that corals cannot survive.

The findings were made by researchers from six institutions following a three-year experiment that simulated both overfishing and nutrient pollution on a coral reef in the Florida Keys. The large body of field data collected over an extended period of time helped resolve some of the fundamental questions about the cause of coral reef declines, scientists said.

“This is grim news, but at least it will help settle the argument over why corals are dying,” said Rebecca Vega Thurber, an assistant professor in the College of Science at Oregon State University and corresponding author on the study.

“This makes it clear there’s no single force that’s causing such widespread coral deaths. Loss of fish that help remove algae, or the addition of excess nutrients like those in fertilizers, can cause algal growth on reefs. This changes the normal microbiota of corals to become more pathogenic, and all of these problems reach critical levels as ocean temperatures warm.”

The end result, scientists say, is a global decline of coral reefs that is now reaching catastrophic proportions.

“We need to know how human activities are affecting coral reef ecosystems,” says David Garrison, program director in the National Science Foundation’s Division of Ocean Sciences, which funded the research. “Coral reefs are among the most sensitive indicators of the health of the oceans. This report is a major contribution toward understanding how reefs will fare in the future.”

Scientists say the problems caused by bacterial infections due to local stressors and warm temperatures are in addition to damage from mass coral bleaching events already under way. Only in the early 1980’s did researchers observe the first mass bleaching event in recorded history. There have now been three such events just in the past 20 years.

In addition to helping to sort out the effects of known stressors like overfishing and nutrient pollution, the researchers made one bizarre and totally unexpected finding.

In normal conditions, parrotfish, like many other species, are essential to the health of coral reefs, nibbling at them to remove algae and causing no permanent damage. But in one part of the experiment corals were so weakened by nitrogen and phosphorus pollution that when parrot fish would bite them, 62 percent of the corals would die. A normally healthy fish-coral interaction had been turned into a deadly one.

“We want to make clear that parrotfish are not the problem, they are a normal and essential part of healthy reef ecosystems,” Vega-Thurber said. “The problem is when corals are so weakened they cannot withstand normal impacts. And the solution will be to help those corals recover their health, by ensuring that their local environment is free of nutrient pollution and that fish stocks are not depleted.”

Among the findings of the study:

The findings, researchers say, make it clear that in the face of global warming, some of the best opportunities to protect coral reefs lie in careful management of fishing and protection of water quality. This would give corals their best chance to have a healthy microbiome and resist warmer conditions without dying.