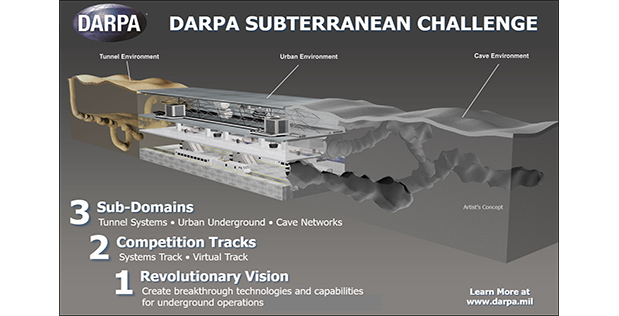 The DARPA Subterranean or “SubT” Challenge aims to explore new approaches to rapidly map, navigate, and search underground environments. Teams from around the world will be invited to propose novel methods for tackling time-critical scenarios through unknown courses in mapping subsurface networks and unpredictable conditions, which are too hazardous for human first responders.

“One of the main limitations facing warfighters and emergency responders in subterranean environments is a lack of situational awareness; we often don’t know what lies beneath us,” said Timothy Chung, program manager in DARPA’s Tactical Technology Office (TTO). “The DARPA Subterranean Challenge aims to provide previously unimaginable situational awareness capabilities for operations underground.”

““We’ve reached a crucial point where advances in robotics, autonomy, and even biological systems could permit us to explore and exploit underground environments that are too dangerous for humans,” said TTO Director Fred Kennedy.“Instead of avoiding caves and tunnels, we can use surrogates to map and assess their suitability for use. Through the DARPA Subterranean Challenge, we are inviting the scientific and engineering communities—as well as the public—to use their creativity and resourcefulness to come up with new technologies and concepts to make the inaccessible accessible.”

Like previous challenges, DARPA-funded and self-funded teams will compete side by side. Teams can compete in one or both of two complementary research tracks: the Systems track, to develop hardware and software to test on a physical course; or the Virtual track, to develop software-based approaches to test on a simulated course.

The Final event, planned for 2021, will put teams to the test with courses that incorporate diverse challenges from all three environments. The winner of the Systems track will take home a $2 million prize, while the winner of the Virtual track will earn a $750,000 prize.