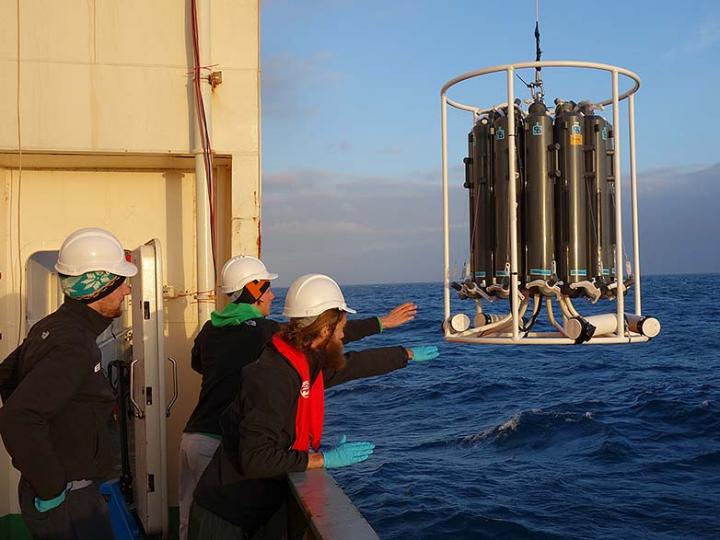 Diatoms are a very common group of algae found not only in freshwater streams, rivers and lakes, but also in marine waters. These unicellular organisms are particularly prevalent in the waters of the Southern Ocean around Antarctica. Given an adequate supply of nutrients and light, diatoms can multiply with such explosive force that they create an algal "bloom".

During their rapid growth cycle, diatoms absorb huge amounts of trace elements and nutrients from the surface water layer, especially silicon to form their shells, and zinc, which plays a vital physiological role in their development. The heavy depletion of nutrients caused by the algal bloom is most prominent in the uppermost water layer and affects the chemistry of many of the world's major oceans -- a phenomenon described by a team of researchers led by Derek Vance, Professor of Geochemistry and Petrology at ETH Zurich, in an article published recently in the academic journal Nature Geoscience.

Researchers can monitor the mass reproduction of these organisms by examining the depth profiles of zinc and silicon concentration in the seawater of different oceans: the profiles are identical for both elements, with a significant depletion in the top kilometre of the water column. The conclusion of the study is that that this is caused by the the biological activity of the diatoms in the surface layer around Antarctica, followed by the transport of the resultant nutrient-depleted water masses to other parts of the ocean in currents.

Depleted of nutrients, the uppermost layer of the water flows in the direction of the Equator. As it reaches a latitude of around 45-50 degrees, it sinks below a warmer surface layer. This middle water layer extends well into the northern oceans and does not mix completely with other layers, and therefore remains starved of nutrients.

Not all the surface water around Antarctica flows towards the Equator. Very near the Antarctic continent itself surface waters become very salty and dense due to the formation of sea ice. This dense water sinks into the abyss. The algae that bloom at the surface often end in a type of mass death once all the nutrients have been exhausted. They then sink into this deep ocean. As they sink some diatoms are also "packed" into particles excreted by tiny sea creatures and, in the ocean's depths, the cells decompose and release zinc and silicon back into the seawater. Deep ocean currents that travel northwards transport the trace elements 5000 metres below the surface. This allows the zinc and silicon to replenish.

The bottom water flows in a wide loop in the direction of the Equator and back towards Antarctica, where the vertical upwelling transports the enriched nutrients to the light-flooded water's surface, allowing the diatoms to begin a new reproductive cycle.

The idea of coupling the lifecycle of diatoms with the dominant currents of the Southern Ocean also allows the researchers led by Professor Vance to resolve the paradox that the depth profiles of silicon and zinc are similar, even though the two substances are required for different parts of the cells.

Zinc is needed for enzymes in the organic part of the cells, while silicon is used to form the inorganic shell. The organic part of the diatoms would be expected to decompose close to the water surface, and the inorganic shell in the lower water layers. This should theoretically produce different depth profiles - but such a phenomenon is not observed. Researchers believe this is because the decomposition of the dead cells does not occur in the surface water, but only once these cells have sunk to a medium depth. At this level, both the organic and inorganic components decompose and the two trace elements are released in the same water mass.

Exactly why diatoms take up relatively large amounts of zinc, even though they need very little, is not yet clear, according to the ETH professor. One possible explanation is that the organisms have transport proteins that convey the essential nutrient iron into the cell. Seawater contains very little iron, however. "To be able to absorb as much iron as possible, these transport proteins are possibly hyperactive. As a side-effect, they also take up (non-specifically) metal ions that are twofold positively charged, including zinc," explains Professor Vance.

Understanding how the diatoms affect nutrient cycles in the world's oceans helps scientists to assess the potential consequences of climate change. "If global warming causes the temperature to rise or saltcontent of seawater todrop, the ocean currents and the distribution of trace elements and nutrients might change as well, which would in turn affect diatoms and their biological activity" Professor Vance stresses.