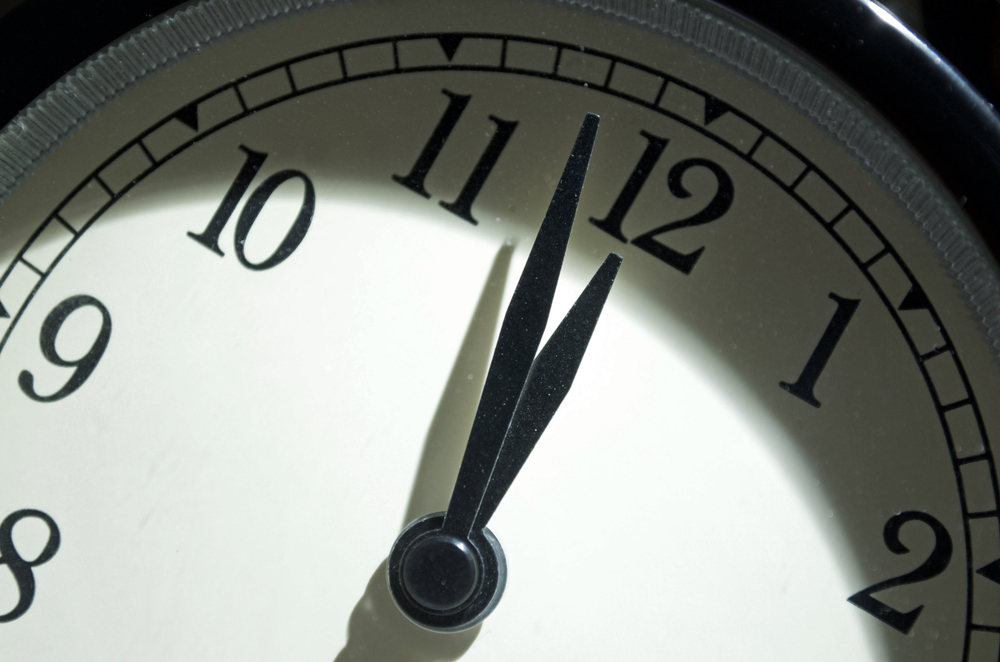 The Doomsday Clock, the prediction of scientists and Nobel Laureates how far the world is from an earth-ending cataclysm, will remain where it is for this year.

But where it is – two minutes to midnight – is also the closest it has ever been to the end times, the Bulletin of the Atomic Scientists pointed out.

“Though unchanged from 2018, this setting should be taken not as a sign of stability but as a stark warning to leaders and citizens around the world,” the Bulletin writes.

The dangers come from increasingly nuclear weapons uncertainty on the international stage, and also the relative inaction on limiting carbon emissions leading to climate change. But equally a danger is a “new abnormal” – a time of intentional “fake news” and corruption of facts, and the very reality upon which compromises of civilization are dependent.

“The current international security situation – what we call the ‘new abnormal’ – has extended over two years now,” the Bulletin’s announcement Thursday reads. “It’s a state as worrisome as the most dangerous times of the Cold War, a state that features an unpredictable and shifting landscape of simmering disputes that multiply the chances for major military conflict to erupt.”

The nuclear situation was potentially made more dangerous through two United States actions, according to the Bulletin. The abandonment of the Obama-era Iran nuclear deal heightened tensions in May, they said. The Trump Administration also withdrew from the Intermediate-range Nuclear Forces Treaty, or INF, in October. And although the North Korean tensions which reached a new height in 2017 abated a bit around a summit between Donald Trump and Kim Jong Un in June, the Democratic People’s Republic of Korea has not disarmed its stockpile. At the same time, the Unites States’ development of missile defense programs coincided with a nuclear weapons modernization program, announced by Russian President Vladimir Putin in March.

Climate change efforts failed to continue at a sustainable pace, according to the Bulletin. The carbon dioxide emissions had leveled off from 2013 to 2016 – but continued to grow in 2017 and 2018, coinciding with the announcement of Trump that he was pulling the U.S. out of the Paris climate accord shortly after taking office in 2017.

“What is known supports a continuation of an ominous trend,” according to the Doomsday announcement. “That the world is losing ground in its efforts to achieve net zero emissions is set against a backdrop of increasing scientific evidence for the severity of impacts of warming of Earth.”

The propaganda and disinformation campaigns – largely fueled by social media on the Internet – is creating divisions even within countries, let alone between nations.

“The Enlightenment sought to establish reason as the foundational pillar of civilized discourse. In this conception, logical argument matters, and the truth of a statement is tested by examination of values, assumptions, and facts, not by how many people believe it,” according to the Bulletin. “Cyber-enabled information warfare threatens to replace these pillars of logic and truth with fantasy and rage.”

Among the recommendations to turning back the Doomsday Clock are:

The Doomsday Clock was instituted by a group of scientists at the beginning of the Cold War in 1947. The debut Clock set the time at seven minutes to midnight – partly because the Soviet Union still hadn’t even tested its own nukes.

The closest the Clock has ever come to midnight was in 1953, just after the first H-bombs were tested by both the United States and the U.S.S.R. Even during the Cuban Missile Crisis in 1963, the nuclear standoff that almost resulted in global war, the Clock was seven minutes away from doom. The farthest the Clock has drifted away from midnight was in 1991, amid the Soviet Union’s collapse, when it was a full 17 minutes away from the metaphorical Armageddon end times. The biggest jump forward since that time was an advance from 14 minutes to nine minutes in 1998, based on the nuclear tests of both India and Pakistan just months earlier. Since then, terrorism and climate change have also been incorporated into the Bulletin of the Atomic Scientists’ decision how best to advance the Clock.