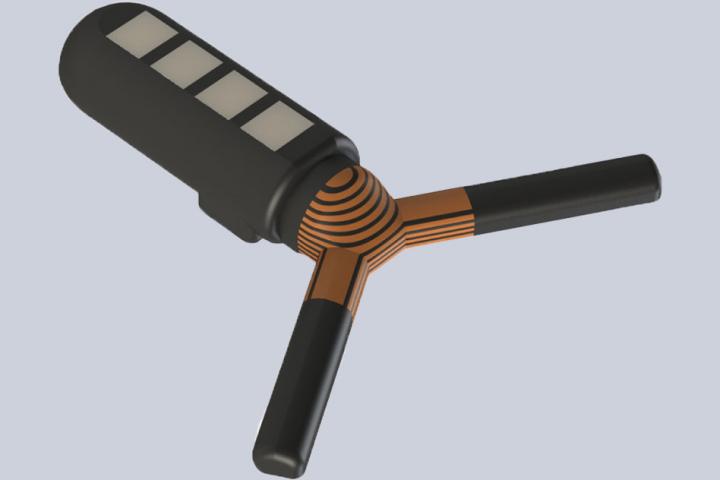 MIT researchers have designed an ingestible sensor that can lodge in the stomach for a few weeks and communicate wirelessly with an external device. Credit: Image courtesy of the researchers

The hassle of taking medication every day could someday be eliminated, thanks to an ingestible electronic pill that lasts in the stomach for close to a month and releases medication only when necessary.

A research team from the Massachusetts Institute of Technology (MIT) has developed the capsule, which could be designed to treat a variety of diseases and disorders and also enables physicians to monitor and control dosages using Bluetooth wireless technology and sensors.

Giovanni Traverso, a visiting scientist in MIT’s Department of Mechanical Engineering, where he will be joining the faculty later in 2019 , explained in an exclusive interview with R&D Magazine that a major problem for patients is that they do not always adhere to their medication regime, particularly when they begin to start feeling better.

“One of the major focuses of our group is how we can make it easier for patients to take medication,” Traverso said. “That really is grounded on the observation that if one is given medication to take more infrequently that the patient is more likely to continue to take that medication. We developed some technologies that really enabled the oral delivery of systems that can stay in the stomach for long periods of time and stay there safely.”

Since starting the project several years ago, the researchers have been working on a variety of ingestible sensors and drug delivery capsules to treat patients who require strict dosing regimens required to treat diseases like HIV or malaria.

Building on that work, the researchers created a star-shaped capsule with six foldable arms that each includes four small compartments that can be loaded with drugs and sensors. The capsule is dissolved after the patient swallows it, with the arms expanding to allow the device to lodge itself in the stomach.

Along with being customized to deliver drugs, the capsule can include sensors that can alert doctors and patients of vital conditions and can transmit information and respond to instructions from a smartphone.

“One of the things we started to recognize a few years ago was the possibility of sensing from the GI tract a whole range of different parameters,” Traverso said. “One of the things we recognized was to really maximize the potential to be there for the patient and help the providers to monitor patients and provide meaningful data to help manage patients.”

The system is able to communicate with other wearable and implantable medical devices, ultimately pooling the information electronically to the patient and doctor.

One of the advantages of the ingestible pills are that they enable doctors to better monitor a patient’s conditions so they can then release a certain dosage of medicine based on those conditions. Doctors can increase dosages based on factors like heart rate or blood pressure, while also being alerted of the early signs of an infection or internal bleeding that they may want to intervene on.

Another application for the new pills is for pain management. According to Traverso, doctors could be alerted of potential opioid overdoses, as well as release therapeutic treatment on demand, depending on the level of discomfort the patient is experiencing.

To create the new capsule, the researchers used a multi-material 3D printing technique that enables them to incorporate certain materials that are flexible.

“What we have here looks like a starfish that can be folded into a capsule,” Traverso said. “So the central portion needs to be flexible to allow that folding. Recognizing those material properties is really important to enable that gastric retention because we need something that can sit in a capsule but can also open up in the stomach and be retained for long periods of time.”

To test this new device, the researchers gave large pigs a capsule and found that it safely stayed in the animal’s stomach for close to a month.

While they have already conducted a proof of concept study on the device with pigs, the researchers are currently working on developing new sensors that could monitor a range of different conditions.

Currently, the device is powered by a small silver oxide battery. However, the researchers are currently exploring using alternative power sources like an external antenna or even stomach acid to power the device.

The researchers have already launched a company charged with developing the technology further and believe they can test the sensors in human patients within two years.

The study was published in Advanced Materials Technologies