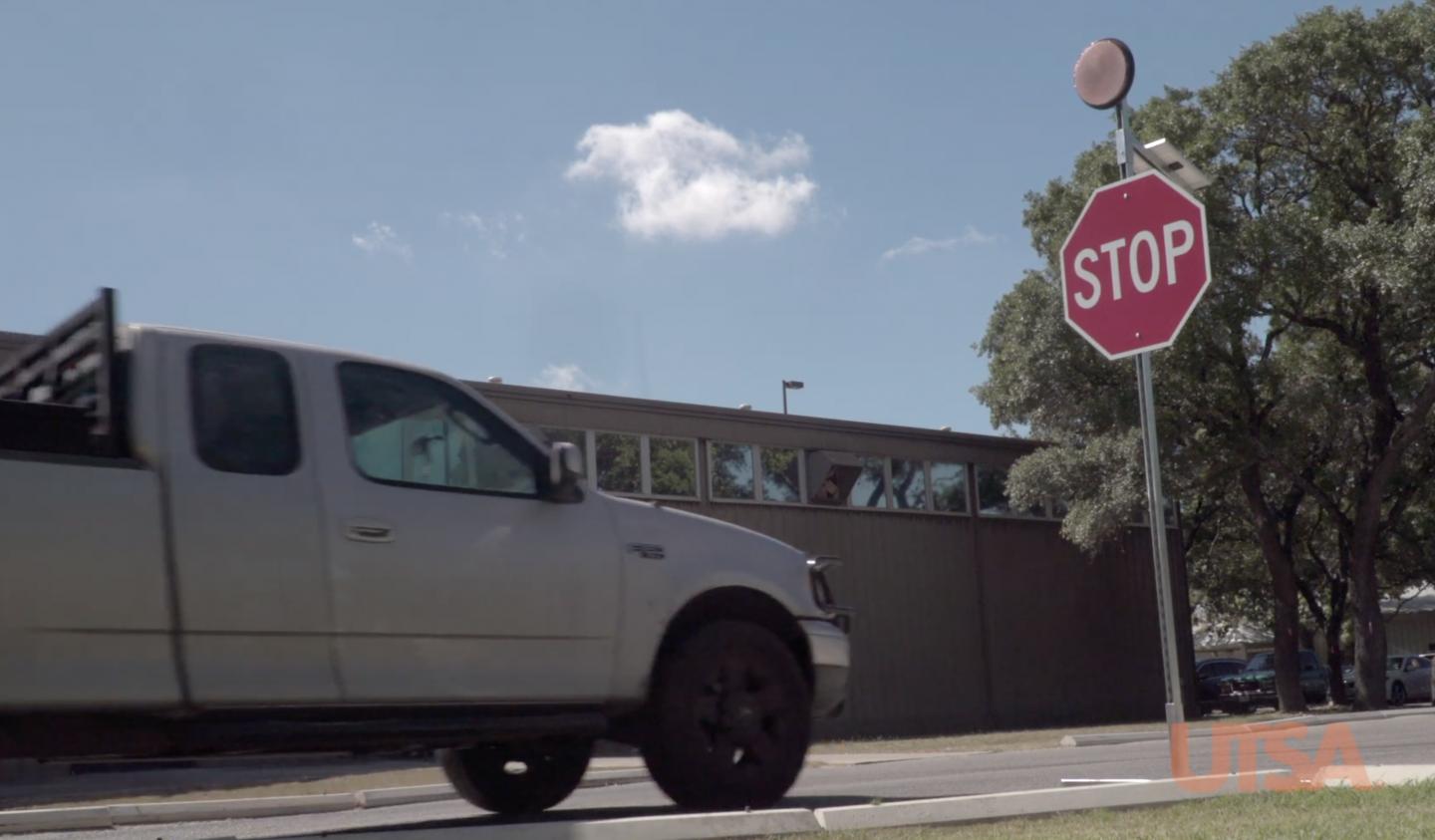 The next-generation stop sign uses a multi-pixel passive infrared sensor that detects a vehicle as it approaches an intersection. Once the vehicle is within the sensing range, a signal beacon triggers the stop sign's flashing system. Credit: Courtesy of UTSA

It's dark on the backroad as a motorist speeds toward the intersection. Up ahead, the stop sign blends with the night and in seconds a deadly crash occurs. According to the U.S. Department of Transportation, more than half of all roadway fatalities occur on rural roads. Now engineers at The University of Texas at San Antonio (UTSA) are building and testing a low-cost, self-powered thermal system that will detect vehicles, improve the visibility of stop signs and prevent deaths.

"Stop signs on rural roads are difficult to notice, and this leads to dangerous accidents," said Ayetullah Biten, a doctoral candidate in the UTSA Department of Electrical and Computer Engineering.

Rural roads account for 70 percent of the nation's byways and the location for 54 percent of all fatalities, according to the Federal Highway Administration. Without access to a power supply, they are more likely than other roads to lack signals and active traffic signage.

To improve driver safety, Sara Ahmed and Samer Dessouky, professors in the UTSA College of Engineering, created a low-cost, self-powered intersection detection and warning system to alert rural motorists about potential dangers. The next-generation stop sign uses a multi-pixel passive infrared sensor that detects a vehicle as it approaches an intersection. Once the vehicle is within the sensing range, a signal beacon triggers the stop sign's flashing system.

"The sensor observes thermal signatures and processes them to detect passing vehicles," said Zachary Balcar, a master's student in the UTSA Department of Electrical and Computer Engineering. "It distinguishes the vehicle's direction of travel, estimates the velocity of its thermal signature and determines the classification of the vehicle."

Overall, the smart system has a 90 percent vehicle detection rate and a vehicle classification accuracy of 72 percent. Compared to current traffic sensing technologies in urban areas such as magnetic loop inductors, video image processors and microwave radar, the new system consumes less power and offers better accuracy. The new technology is also much less expensive to produce. Current safety systems can cost as much as $5,000. UTSA's detection promises to be a fraction of the price at $60 to $100 per unit.

"Our off-roadway system can be installed on urban or rural roads completely independent of the utility power grid, because it is powered by small solar panels and functions in all weather conditions," said Ahmed.

The low-power rural intersection detection and warning system was developed with support from the Connect program, a collaborative research program that is co-funded by UTSA and Southwest Research Institute.

The project team has filed an invention disclosure for the system, which was recently recognized nationally by the American Road and Transportation Builders Association, and expects to adapt the technology to pedestrian detection, for border security and for vehicle-to-infrastructure communication.