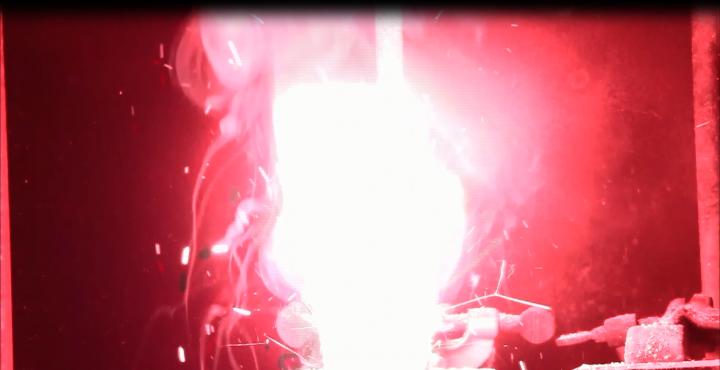 US and German researchers teamed to develop an environmentally-friendly red light flare. The formula is a lithium-based red-light-emitting pyrotechnic composition of high purity and color quality, and avoids a list of potentially toxic elements, namely strontium and chlorinated organic materials. Here, they captured a mid-burn image of the strontium- and halogen-free red flare burning.

Researchers at the U.S. Army Research Laboratory and the Ludwig Maximilian University in Munich, Germany have developed an environmentally-friendly red light flare popular in fireworks displays and among Soldiers who use them in training and battlefield operations as signaling devices.

The formula is a lithium-based red-light-emitting pyrotechnic composition of high purity and color quality, and avoids a list of environmentally-objectionable elements, namely strontium and chlorinated organic materials, both considered hazardous to humans.

The new formulation is based on a non-hygroscopic dilithium nitrogen-rich salt that serves as both oxidizer and red colorant. The formulation may draw interest from the civilian fireworks and military pyrotechnics communities for further development as they both have a vested interest in the development of environmentally conscious formulations, stated ARL’s Dr. Jesse J. Sabatini, a research chemist, who with the university’s Professor Thomas M. Klapötke coauthored a paper in a recent edition of Angewandte Chemie.

To achieve red-light-emission of high color purity, the authors report a formulation consisting of powdered magnesium and hexamine as the fuels, nitrocellulose, an epoxy binder system, and a lithium-based high-nitrogen salt, which serves as both the oxidizer and colorant. When burned, this formulation was found to exhibit a relatively cool-burning flame, while producing suitable quantities of red-light-emitting atomic lithium. While further optimization is still needed to improve the luminosity of Li-based red-light-emitting flares, this represents the first known example of a successful red-light-emitting formulation of high color quality and purity based on lithium that does not contain any perchlorates, halogenated materials or strontium-based materials.

“When these formulations are burned, a bright red light is produced; brought about by the generation of strontium(I) chloride (SrCl). SrCl is a deep red-light-emitter, and it is what’s known as a metastable molecular emitter; an emitter that is not stable in the ground state at low temperatures, but which is stable in the excited state during a high temperature combustion process. Unfortunately, perchlorates, chlorinated organic materials and strontium-based materials found in traditional red-light-emitting pyrotechnic formulations are falling out of favor from an environmental perspective, and are facing increasing scrutiny and/or regulatory action from the EPA,” said Sabatini.

The authors cited a recent EPA report that found strontium as potentially harmful to human health, specifically that it replaces calcium in the bone, interferes with bone strength, and thus affects the skeletal development of children and adolescents. In 2014, the EPA made a preliminary decision to start regulating the amount of strontium in drinking water. Strontium has been detected in 99?% of all public water systems and at levels of concern in 7?% of the public water systems in the USA. Whereas U.S. military training grounds were not included in the study, these facilities may show elevated concentrations of strontium as well, given the presence of strontium in currently used red-light-illuminating signaling pyrotechnic compositions.

The next step in this research is to make the strontium- and halogen-free red flare the team developed brighter, Sabatini said. “In other words, efforts now need to be made to increase the luminous intensity of the formulation or a close derivative thereof. This can be done in parallel with doing what is called prototype experiments, in which the new flare formulations can be tested on larger scales. The improvements in luminosity and the large scale prototype tests will be needed in order to push the technology forward.”