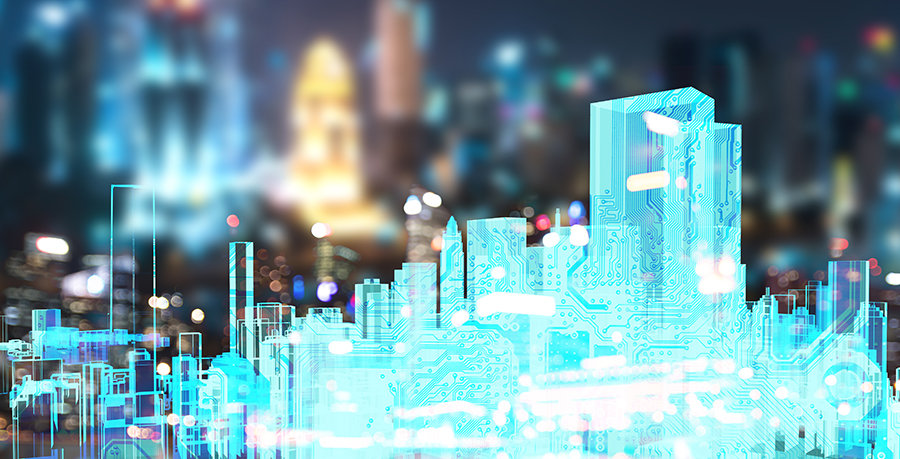 The Argonne-led Multiscale Coupled Urban Systems project aims to help city planners better examine complex systems, understand the relationships between them and predict how changes will affect them. The ultimate goal is to help officials identify the best solutions to benefit urban communities. (Image by Argonne National Laboratory.)

Walk around any city neighborhood and chances are it looks nothing like it did 20 years ago. Thanks to growing urbanization, cities globally are rapidly expanding and accounting for more of our world’s population, gross domestic product and greenhouse gases.

Adapting a city to keep up with evolving needs is one of the greatest daily challenges that city planners, designers and managers face. They must consider how proposed changes will affect systems and processes such as our power grid, green spaces and public health facilities. They also need to understand how these systems and processes will influence each other.

Charlie Catlett wants to make their job easier by using the power of exascale – supercomputers that will be at least 50 times faster than those in use today. Catlett, a senior computer scientist at the U.S. Department of Energy’s (DOE) Argonne National Laboratory and a senior fellow at the Computation Institute, a joint institute of Argonne and the University of Chicago, leads the Multiscale Coupled Urban Systems project, which will create a computational framework for urban developers and planners to evaluate integrated models of city systems and processes.

With this framework, city planners can better examine complex systems, understand the relationships between them and predict how changes will affect them. It can ultimately help officials identify the best solutions to benefit urban communities.

“We’re focused on coupling models for urban atmosphere, building energy, socioeconomic activity and transportation, and we’ll will later expand to energy systems models,” Catlett said. “The framework will define what data will be exchanged between these models and how that data will be structured.”

Once the framework is complete, city planners such as those within the City of Chicago’s Department of Planning and Development can work with researchers to answer questions, raise their own and optimize design proposals.

“It’s a whole new frontier for us,” said Eleanor Gorski, the deputy commissioner of planning, design and historic preservation for the City of Chicago’s Department of Planning and Development.

“I think the most valuable aspect for us in city planning is being able to see how different conditions and parameters can affect different systems,” said Gorski. “For example, if you have a building that is 10 stories and the developers want to add five stories, one of the things we’d want to know is what effect that will have on transportation. Is it going to cause congestion? What we don’t have, and what I’m interested in, are those links between the data and the influence that one system has over another.”

Two models that Catlett and his collaborators are working to couple are EnergyPlus, a DOE program to model the energy demands of buildings, and Nek5000, a turbulence model that will track heat and airflow going through a city.

By pairing these two, researchers can, for example, capture how variations in local climate can influence heat transfer, ventilation and energy demands. From there, policy experts could propose ways to improve structure design in future developments.

First, however, researchers must determine what kind of information to share between models. Temperature, for example, is something Nek5000 could send to EnergyPlus, since air temperature naturally affects the temperature along building surfaces, as well as heating and cooling costs. Yet even though such models are connected, today most run independently, not generally coupled with others, Catlett said.

The coupling framework will also aim to incorporate data from sensory devices, like those used in Argonne’s urban Array of Things project. These sensors measure key components of the environment, such as ultraviolet and infrared light, cloud cover, temperature and humidity. These measurements can validate and improve existing models.

“The framework is key to solving these problems. It will essentially act as a data cache (short-term storage) through which a model can feed and receive information from another model or obtain data from sensory devices,” Catlett said.

One of the challenges is that simulations of models run at different rates. For example, simulating one hour of time with an atmospheric model may take a day of computing, while simulating the same amount of time with a building energy model may take half a second. To overcome this problem, researchers are examining various techniques.

“We’re exploring ways to match speeds by experimenting with the resolution of the simulations and by redistributing the resources on the machines, for example, having the more time-intensive simulation run on more computer cores than the less time-intensive one,” Catlett said.

Researchers are also examining how to make the framework flexible enough to handle a wide variety of models. With a more broad-based design, developers can use the framework to answer many different kinds of questions.

“To couple models, you’d traditionally have a laboratory such as Argonne or Oak Ridge develop a custom package. The problem is that it ends up being so specific that others can’t work with it, even if they’re trying to address similar questions. In that case, they have to get another custom package developed to address their study,” Catlett said.

“With our framework, we can eliminate this duplication of effort, but only if we design it in a general way such that other researchers can plug in their model with any of the others,” he said.

This project is funded by and is one of the applications of the Exascale Computing Project (ECP), a collaborative effort of the DOE Office of Science and the National Nuclear Security Administration, that seeks to provide breakthrough modeling and simulation solutions through exascale computing.

The Array of Things project is supported by the National Science Foundation, with additional support from Argonne National Laboratory and the Chicago Innovation Exchange.