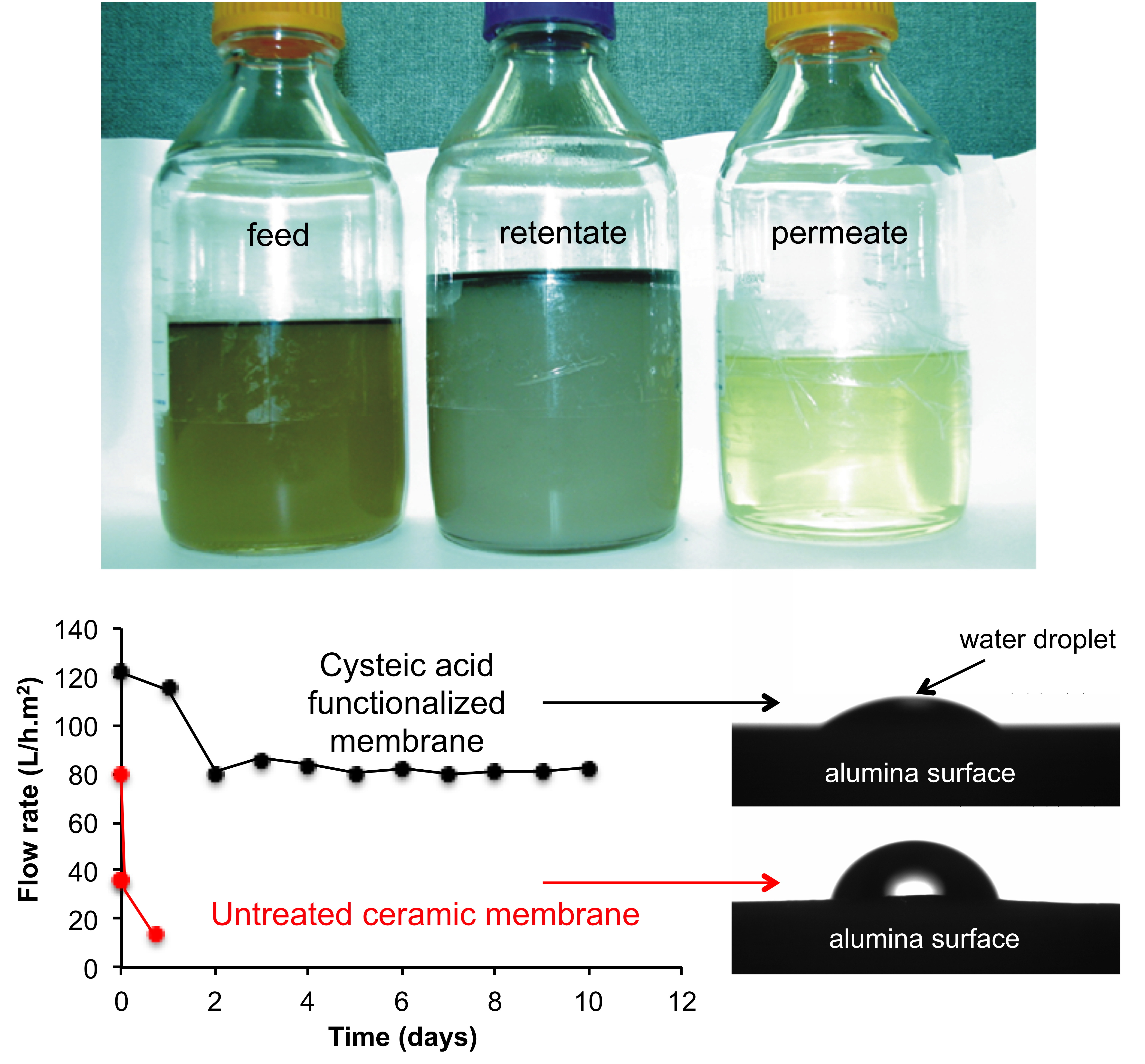 A superhydrophilic filter produced at Rice University can remove more than 90 percent of contaminants from water used in hydraulic fracturing operations. In this image, “produced” water from a Marcellus shale fracturing site is at left, the retentate (carbon removed from the feed) is at center, and filtered “permeate” water is at right. The hydrophilic treatment keeps the filter from fouling and restricting flow while rejecting contaminants. Courtesy of the Barron Research Group

A new filter produced by Rice University scientists has proven able to remove more than 90 percent of hydrocarbons, bacteria and particulates from contaminated water produced by hydraulic fracturing (fracking) operations at shale oil and gas wells.

The work by Rice chemist Andrew Barron and his colleagues turns a ceramic membrane with microscale pores into a superhydrophilic filter that “essentially eliminates” the common problem of fouling.

The researchers determined one pass through the membrane should clean contaminated water enough for reuse at a well, significantly cutting the amount that has to be stored or transported.

The work is reported in Nature’s open-access Scientific Reports.

The filters keep emulsified hydrocarbons from passing through the material’s ionically charged pores, which are about one-fifth of a micron wide, small enough that other contaminants cannot pass through. The charge attracts a thin layer of water that adheres to the entire surface of the filter to repel globules of oil and other hydrocarbons and keep it from clogging.

A hydraulically fractured well uses more than 5 million gallons of water on average, of which only 10 to 15 percent is recovered during the flowback stage. “This makes it very important to be able to re-use this water,” Barron said.

Solubilized hydrocarbon molecules slip right through microfilters designed to remove bacteria. Natural organic matter, like sugars from guar gum used to make fracking fluids more viscous, require ultra– or nanofiltration, but those foul easily, especially from hydrocarbons that emulsify into globules. A multistage filter that could remove all the contaminants isn’t practical due to cost and the energy it would consume.

“Frac water and produced waters represent a significant challenge on a technical level,” Barron said. “If you use a membrane with pores small enough to separate, they foul, and this renders the membrane useless.

“In our case, the superhydrophilic treatment results in an increased flux (flow) of water through the membrane and inhibits any hydrophobic material – such as oil – from passing through. The difference in solubility of the contaminants thus works to allow for separation of molecules that should in theory pass through the membrane.”

The acid covered not only the surface but also the inside of the pores, and that kept particulates from sticking to them and fouling the filter.

In tests with fracking flowback or produced water that contained guar gum, the alumna membrane showed a slow initial decrease in flux — a measure of the flow of mass through a material — but it stabilized for the duration of lab tests. Untreated membranes showed a dramatic decrease within 18 hours.

The researchers theorized the initial decrease in flow through the ceramics was due to purging of air from the pores, after which the superhydrophilic pores trapped the thin layer of water that prevented fouling.

“This membrane doesn’t foul, so it lasts,” Barron said. “It requires lower operating pressures, so you need a smaller pump that consumes less electricity. And that’s all better for the environment.”