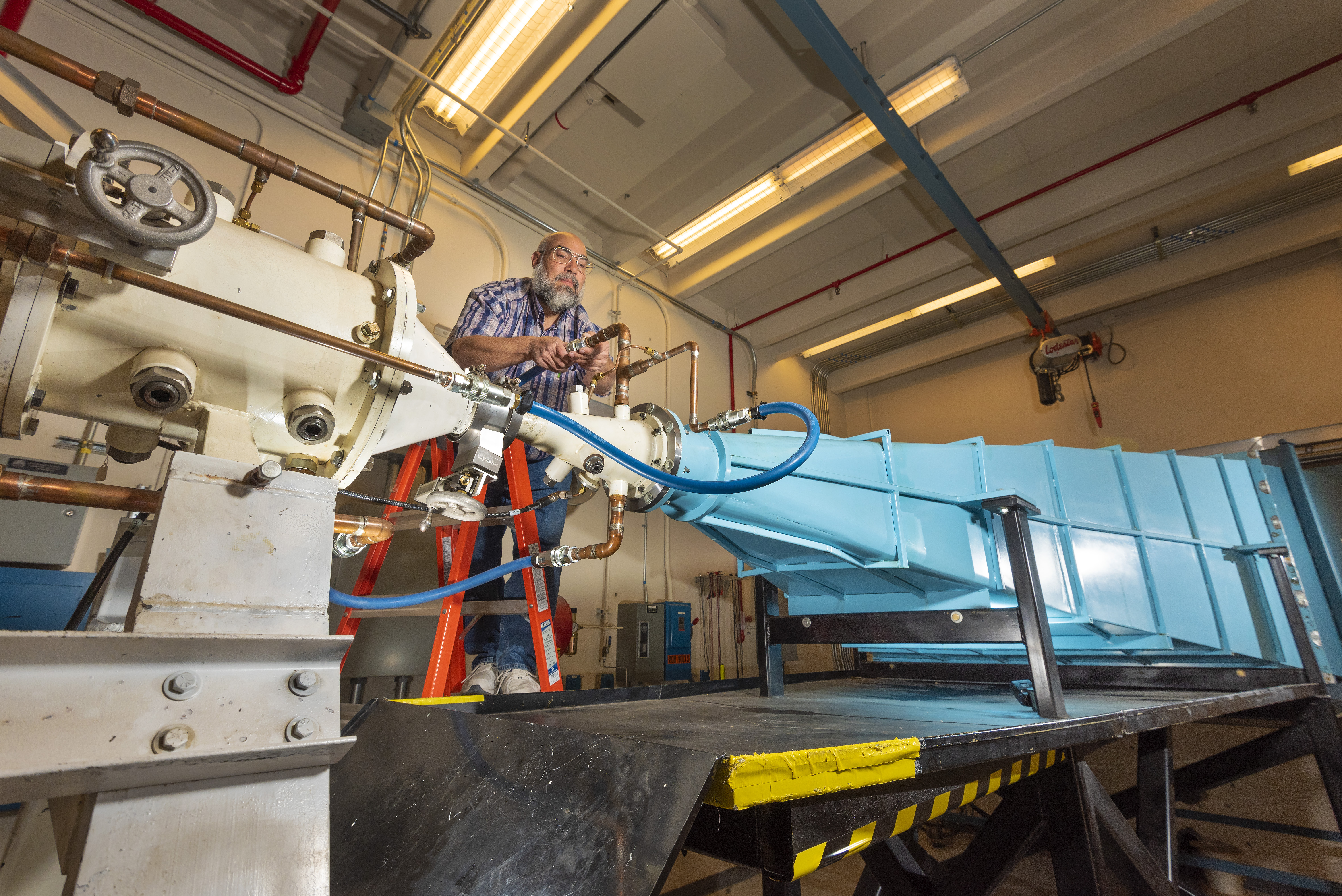 An electromagnetic pulse, or EMP, emitted by a nuclear weapon exploded high above the United States could disable the electronic circuits of many devices vital to military defense and modern living.

These could include complicated weapon systems as well as phones, laptops, credit cards and car computers. Also in trouble might be home appliances, gas station pumps and bank accounts.

Fortunately, military equipment is designed to be immune to various levels of EMP, and the validity of its designs— and some civilian designs as well — have been tested and improved by a “friendly” EMP generator installed in a recently renovated facility at Sandia National Laboratories.

The ElectroMagnetic Environment Simulator, or EMES, consists of a hippopotamus-sized Marx generator that sits alone in a small laboratory. The large capacitor bank stores electrical energy and releases it upon command. The resulting blast of energy, in the form of an electromagnetic pulse, can be focused on a target every 15 minutes. Absorbers at the far end of the test chamber gobble up the energy not absorbed by the object being tested.

“An EMP pulse generated by an adversary would be an attempt to disrupt our communications or other equipment,” said Leonard Martinez, the Sandia researcher in charge of the timing and firing control system. “Recent advancements now enable us to provide that pulse within a microsecond of the unit’s timing requirement.”

The idea is to explore the effects of the energy pulse by testing an item at critical times during its processes. Learning when and where a problem may occur in the unit permits engineers to design better EMP shielding to prevent such upsets.

Sandia’s EMES testing process involves trundling components into the target area, subjecting them to the rapidly peaking EMP and then removing them to make way for the next item to test. Preliminary results are provided immediately, said Martinez, and a longer report with more extensive analysis is issued later.

“The builders or owners generally solicit help from my group when it comes to additional shielding designs,” Martinez said. The design focus can range from protecting tiny electronic parts to shielding larger subsystems of military equipment.

If the device passes the specification level test at normal energy requirements, its owners may ask the test facility to increase the EMP electric-field amplitude in incremental steps to determine the device’s capabilities at higher threat levels. “This gives the customer a better level of confidence about their product,” said Martinez.

Earlier versions of the pulse-producing machine first operated from 1978 to 1994. The test facility lay fallow until after the 9/11 attacks, when it was resurrected to test communications across the nation in the event that an adversary could generate an EMP pulse in or near the United States. “Could we still communicate? Would our radios, televisions, microwave ovens and refrigerators work after such a pulse arrives, was the question,” said Martinez.

The renovated facility was intended to support the National Nuclear Security Administration mission but over time came to satisfy military missions and civilian needs. It continues to do so. Sandia researchers are working to integrate EMES into a national EMP testing center focused on increasing the resilience of the nation’s electric grid.