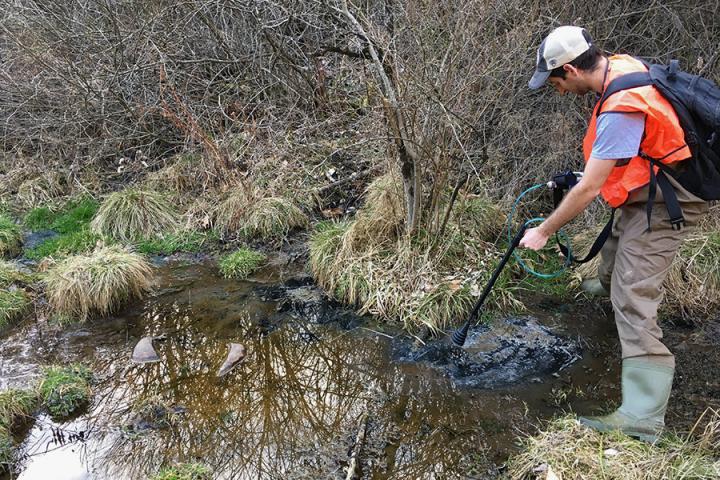 Joshua Woda, a graduate student in geosciences at Penn State, measures methane concentrations in the air. Gas bubbles out of the water in the nearby stream. Credit: Joshua Woda / Penn State

Chemical clues in waters near Marcellus Shale gas wells in rural Pennsylvania can identify new drilling-related sources of methane contamination, according to scientists.

Scientists also found that methane contamination may be more likely to occur when drilling takes place in certain geological settings, like those found in the study area in Lycoming County.

“This study provides new clues about where we might expect to find potential environmental impacts related to shale drilling and how to better identify new incidents after they occur,” said Joshua Woda, a graduate student in geosciences at Penn State.

Woda and a team of researchers reported the finding in a paper published online this week in the Proceedings of the National Academy of Sciences.

The study focuses on an area where state regulators have cited multiple Marcellus Shale gas wells for well integrity issues. The nearest gas well was cited by state regulators for contaminating five residential water wells with high levels of methane. This gas poses an explosion hazard in enclosed spaces.

Natural gas is primarily composed of methane, and drilling can cause the gas to escape into waterways or the atmosphere, where it is a potent greenhouse gas. Scientists think these incidents are rare compared to the overall number of shale gas wells drilled, but they are also difficult to identify.

Methane is common in Pennsylvania waterways, caused by natural sources like bogs and wetlands, as well as natural migration from deep underground rocks. This migration occurs separately from shale drilling.

“Because we lack good baseline data for water quality throughout Pennsylvania, it can be difficult to identify possible impacts of shale drilling,” said Susan Brantley, distinguished professor of geosciences at Penn State and director of the Earth and Environmental Systems Institute. “While we believe these incidents of gas-well leakage are rare compared to the total number of gas wells, this study gives us a new tool to identity them when they occur.”

Scientists analyzed pre- and post-drilling water samples from stream and well water around the reported leaks. They found that concentrations of some metals in the water began to rise shortly after the leaks began.

“We’ve documented that recent methane migration can change water chemistry in a way that can mobilize metals, such as iron, and release other unwanted chemical compounds, such as hydrogen sulfide,” Woda said. “This is important because it can let people know what they might expect if they are recently impacted by something like a shale gas well leaking into their water supply.”

The change in water chemistry indicates a gas plume moved into an aquifer from deep underground where horizontal drilling into shale has been accompanied by fracking. The clues could be used elsewhere to determine new leaks, researchers said.

“In other words, we have come up with new tracers that can be used with other lines of evidence to determine if a water well was impacted by recent gas migration,” Woda said. “It is especially useful for people who did not collect pre-drill water samples.”

Scientists said a high number of wells around the study area have been cited for cementing or casing violations. Drilling-related leaks are often caused by these types of construction issues.

“A high percentage of unconventional wells have received violations in this study area — about one third of the 101 producing wells — which is much higher than statewide estimates,” Woda said.

The shale formation in the area is shallow and located along the axis of a large fold. Scientists said wells there may intersect fractures that are interconnected, forming good pathways for upward migration.

“We discovered that the drilled shale is very shallow at this point and the overlying rocks are tightly folded,” Brantley said. “We think we have discovered a site where fractures in the folded rock may be helping natural gas come to the surface and that it may be accelerated by the presence of gas wells.”

Further study could provide maps of areas where drilling could be avoided or lead to better management practices that could reduce risks for methane migration, the researchers said.