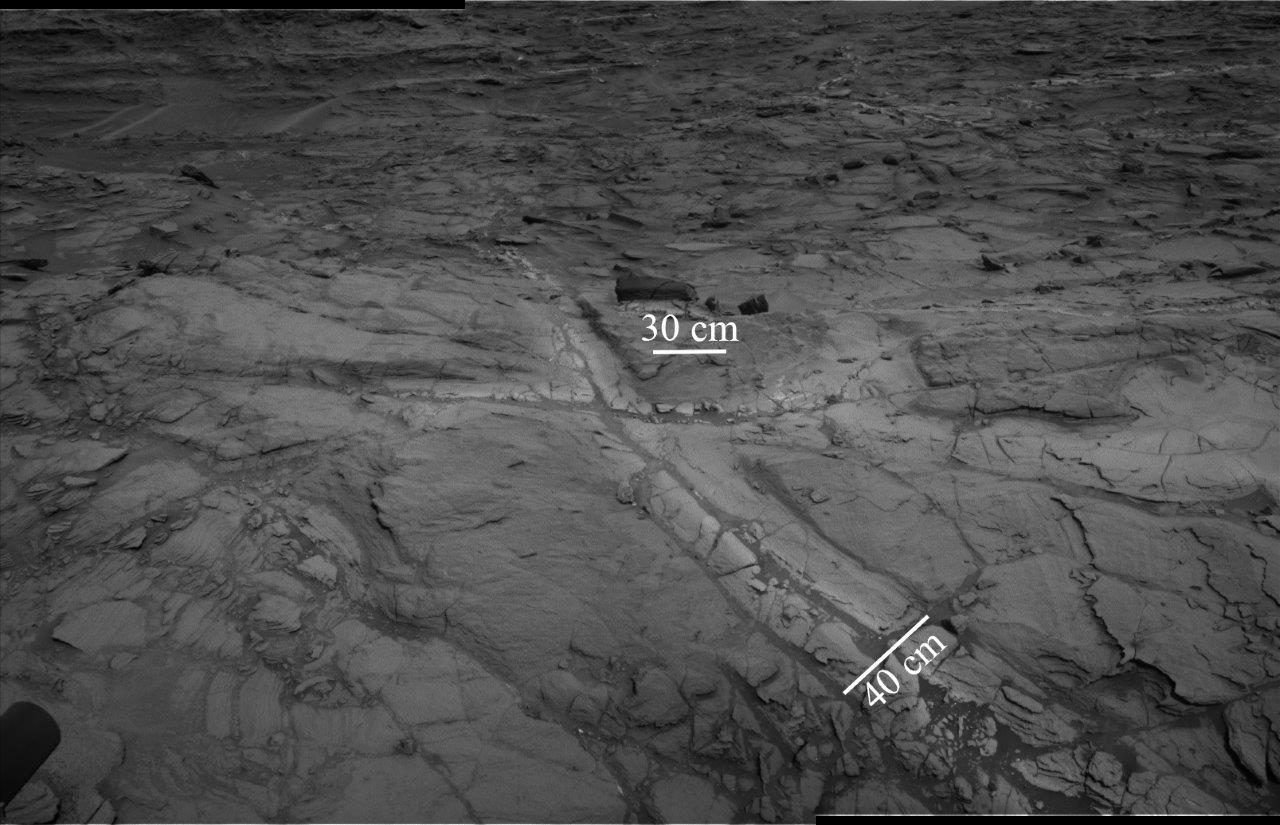 A mosaic of images from the navigation cameras on the NASA Curiosity rover shows “halos” of lighter-toned bedrock around fractures. These halos comprise high concentrations of silica and indicate that liquid groundwater flowed through the rocks in Gale crater longer than previously believed. Credit: NASA/JPL-Caltech.

Lighter-toned bedrock that surrounds fractures and comprises high concentrations of silica — called “halos”– has been found in Gale crater on Mars, indicating that the planet had liquid water much longer than previously believed. The new finding is reported in a new paper published today in Geophysical Research Letters, a journal of the American Geophysical Union.

“The concentration of silica is very high at the centerlines of these halos,” said Jens Frydenvang, a scientist at Los Alamos National Laboratory and the University of Copenhagen and lead author of the new study. “What we’re seeing is that silica appears to have migrated between very old sedimentary bedrock and into younger overlying rocks.

“The goal of NASA’s Curiosity rover mission has been to find out if Mars was ever habitable, and it has been very successful in showing that Gale crater once held a lake with water that we would even have been able to drink, but we still don’t know how long this habitable environment endured. What this finding tells us is that, even when the lake eventually evaporated, substantial amounts of groundwater were present for much longer than we previously thought–thus further expanding the window for when life might have existed on Mars.” Watch a video of the research here.

Whether this groundwater could have sustained life remains to be seen. But this new study buttresses recent findings by another Los Alamos scientist who found boron on Mars for the first time, which also indicates the potential for long-term habitable groundwater in the planet’s past.

The halos were analyzed by the rover’s science payload, including the laser-shooting Chemistry and Camera (ChemCam) instrument, developed at Los Alamos National Laboratory in conjunction with the French space agency. Los Alamos’s work on discovery-driven instruments like ChemCam stems from the Laboratory’s experience building and operating more than 500 spacecraft instruments for national security.

Curiosity has traveled more than 16 kilometers (10 miles) over almost 1,700 Martian days as it has traveled from the bottom of Gale crater part way up Mount Sharp in the center of the crater. Scientists are using all the data collected by ChemCam to put together a more complete picture of the geological history of Mars.

The elevated silica in halos was found over approximately 20 to 30 meters (66 to 100 feet) in elevation near a rock-layer of ancient lake sediments that had a high silica content.

“This tells us that the silica found in halos in younger rocks close by was likely remobilized from the old sedimentary rocks by water flowing through the fractures,” Frydenvang said. Specifically, some of the rocks containing the halos were deposited by wind, likely as dunes. Such dunes would only exist after the lake had dried up. The presence of halos in rocks formed long after the lake dried out indicates that groundwater was still flowing within the rocks more recently than previously known.