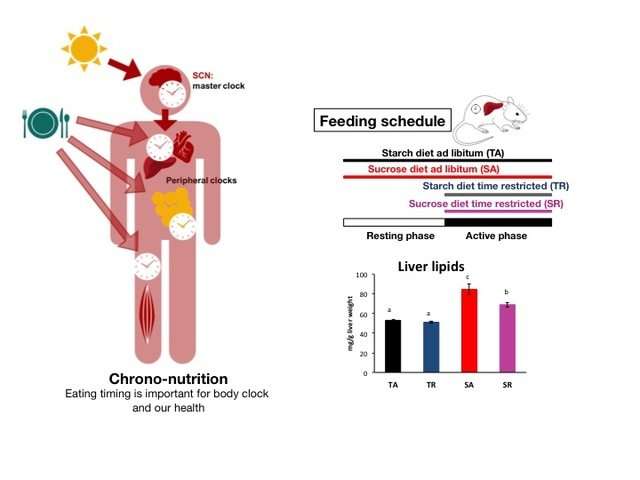 A sedentary lifestyle combined with a diet dominated by processed foods has widely resulted in a range of conditions including diabetes, obesity, and high blood pressure, which are known collectively as metabolic syndrome. Although many insights into the causes of metabolic syndrome have been made, much remains to be understood about the complex interplay among the genetic, environmental, and lifestyle-related factors in terms of preventing this condition.

Sucrose, a common form of sugar made up of glucose and fructose, is one part of the diet known to be associated with conditions such as obesity and high blood pressure when consumed in excess. However, it is still somewhat unclear how this occurs and how to minimize it. In a new paper published in PLOS One, a research team centered at Nagoya University has shown that restricting the consumption of a high-sucrose diet in rats to the part of the day when they are active avoids many of the deleterious effects of excess sugar on the body.

The team established four groups of rats with different diets: either a high-sucrose diet or an equivalent diet with starch replacing the sucrose, with these being made available either throughout the day and night, or only when the rats were active. Given the nocturnal nature of rats, this corresponded to the nighttime.

“We chose to study rats because their body weight is ten times that of the commonly used animal model of mice, making them more similar to humans, and because they have a more stable metabolism” Hiroaki Oda of the Laboratory of Nutritional Biochemistry says. “We subjected the four groups to various analyses, including of body weight, lipids in blood and liver, and hepatic gene expression.”

The results showed that, when the rats had access to high-sucrose food only at night when they were active, their levels of fat in the blood and liver were lower than those in the group in which such food was available all the time, despite the two groups consuming the same amount overall. The results also indicated that this improvement was not caused by any knock-on effect on the expression of genes for fat metabolism, indicating that it was the temporal restriction on feeding itself that produced the beneficial effects.

“Our findings could be very important for the fight against obesity and other lifestyle-related diseases in humans,” lead author Shumin Sun says. “Potentially, limiting sugar intake to the part of the day when people are most active could reduce many of the damaging effects of its excessive consumption across the globe.”