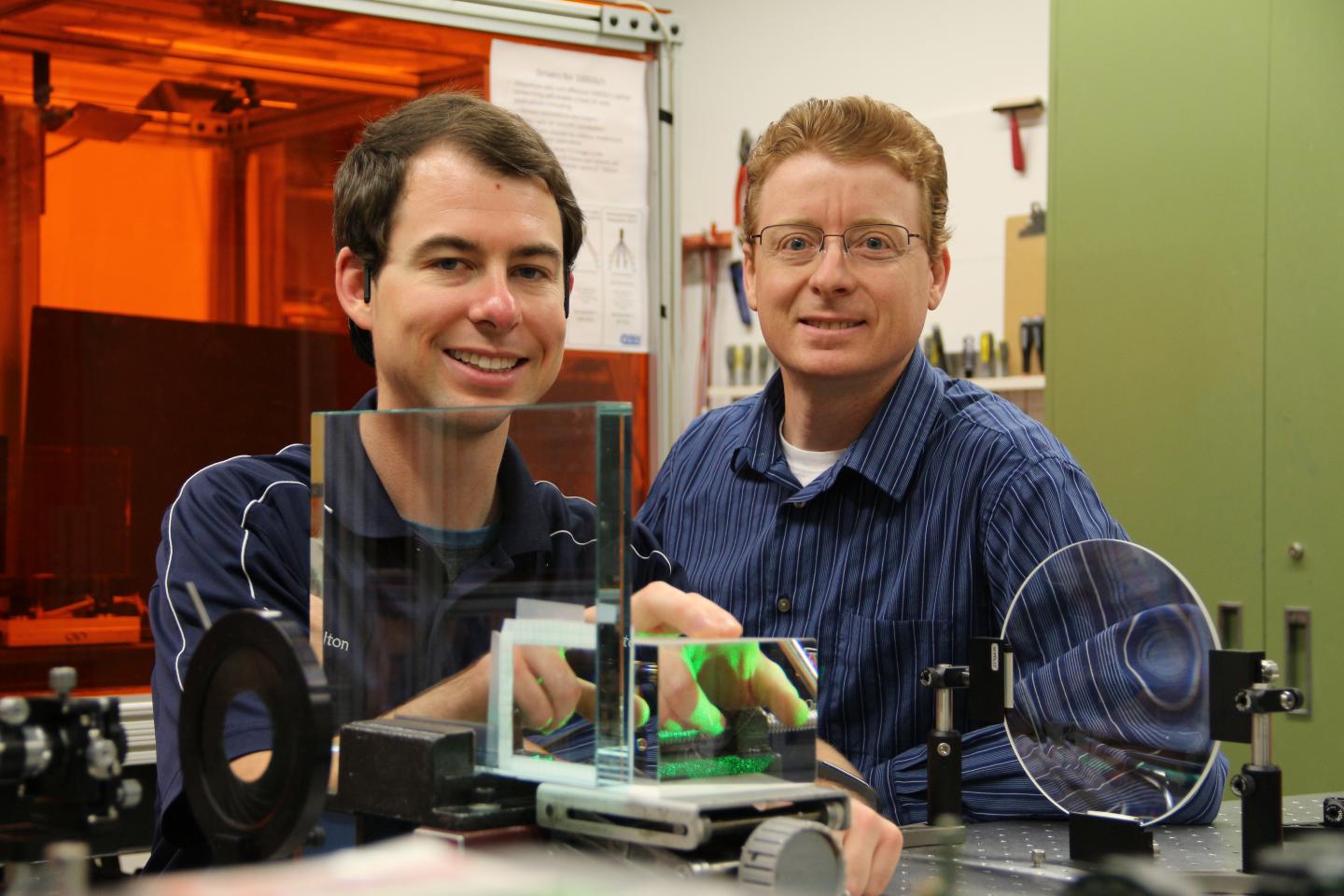 Colton Bigler and Pierre-Alexandre Blanche used holography to improve heads-up displays that overlay images onto the windshields of cars and airplanes. Shown here is the laboratory version of their system.

A new holography approach could increase the size of eye boxes used in heads-up displays for planes and cars.

Transparent heads-up displays are often used in airplanes and cars to provide information, including critical flight data or driving directions on the windshield. They are usually equipped with a small eye box, so displayed information partially or wholly disappears if users shift their gaze too much.

“A heads-up display using our new technology installed in a car would allow a driver to see the displayed information even if he or she moved around or was shorter or taller than average,” research team leader Pierre-Alexandre Blanche of the University of Arizona, said in a statement.

The new approach could be used to increase the size of a displayed area.

“Increasing the size of either the eye box or the displayed image in a traditional heads-up display requires increasing the size of the projection optics, relay lenses and all the associated optics, which takes up too much space in the dashboard,” first author Colton Bigler, a doctoral student in Blanche’s laboratory, said in a statement. “Instead of relying on conventional optics, we use holography to create a thin optical element that can be ultimately applied onto a windshield directly.”

According to the research team, laser light interactions could be used to fabricate optical elements like lenses and filters in light-sensitive materials. The holographic elements are smaller than traditional optical components and are also able to be mass-produced.

“We are working with Honeywell to develop these displays for aircraft, but they could just as easily be used in cars,” Blanche said. “Our approach requires no expensive equipment and no new materials need to be developed. Furthermore, the display can be completely integrated into a standard car windshield.”

The researchers performed optical simulations to create a laboratory version of the head-up display that created an eye box seven times larger than the original image.

They then made a working prototype that displayed flight information on a piece of glass that can be part of the transparent enclosure that cover cockpits.

They were able to nearly double the eye box of the original image and showed that the image does not disappear until the user looks beyond the edge of the hologram, while also demonstrating that the presented image appears in the far field, so observers do not need to change their focus to see the displayed information.

“It’s possible to create a much larger eye box by increasing the size of the injection and extraction holographic elements, the only limitation is the size of the glass displaying the image,” Blanche said. “Our work is a good example of how holography can be used to solve many types of optical problems for various applications. A similar approach might also be useful for augmented reality headsets, which also merge computer-generated images with views of the outside world but with a display that is close to the eye.”

The team also said that they could expand the display to create full-color heads-up displays. They are also working to use the same approach to create a much larger image that is extracted by the holographic element to increase the size of field of view of the display.

The study was published in Applied Optics.