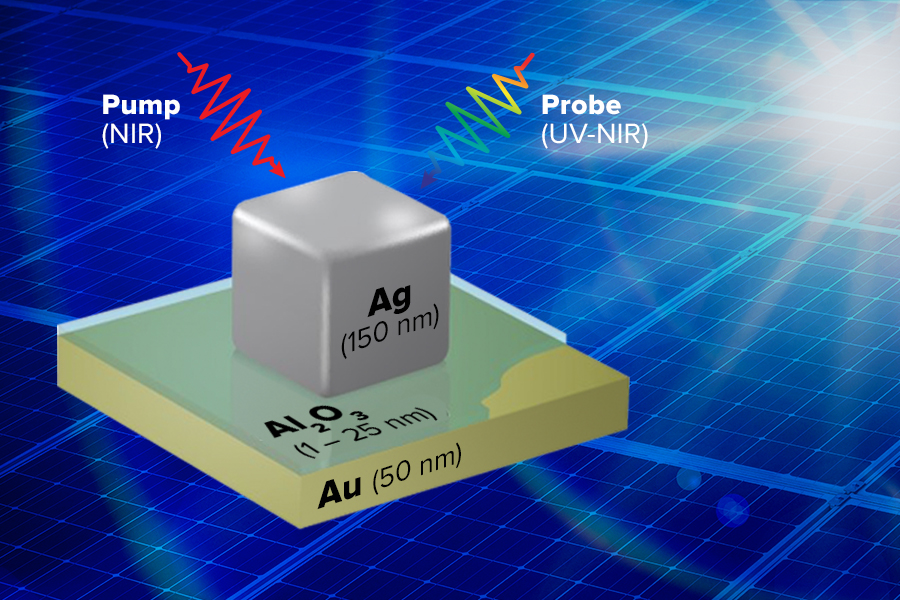 The figure in the foreground shows near-infrared and broadband light pulses (squiggly lines at top) striking a silver nanocube measuring 150 nanometers square. The near-infrared pulse excites electrons in the nanostructure, while the broadband pulse monitors their optical response. An aluminum oxide spacer separates the nanocube from a gold film with a thickness of 50 nanometers. The spacer measures between 1 and 25 nanometers thick. A water molecule, by comparison, is approximately 1.5 nanometers in diameter. (Image courtesy of Matthew Sykes, Argonne National Laboratory, Shutterstock / Triff and Shutterstock / siro46.)

Solar and renewable energy is getting hot, thanks to nanoscientists — those who work with materials smaller than the width of a human hair — at the U.S. Department of Energy’s (DOE) Argonne National Laboratory who have discovered new, better and faster ways to convert energy from light into energetic electrons. Their innovative methods could provide new opportunities and greater efficiencies for solar energy conversion applications.

Argonne scientists and their collaborators created hybrid nanomaterials — measured in billionths of a meter — at the laboratory’s Center for Nanoscale Materials (CNM), a DOE Office of Science User Facility, to harness the full energy of photons.

The result was energetic, or “hot,” electrons, which carry the same amount of energy as a photon that strikes nanomaterial components. These little dynamos could eventually lead to big advances in photocatalytic water splitting — in which special materials convert solar energy into clean and renewable hydrogen fuel — and photovoltaics, which convert solar energy into electricity.

The research team focused on metals and metal nanostructures because they absorb a great deal of light, which is the first step to increasing the number of energetic electrons in an illuminated material.

“You want to preserve all that energy in the photon as much as possible, so we’re focusing on what kind of nanostructure you need in order to make a lot of those,” said Gary Wiederrecht, co-author and senior scientist and group leader of the Nanophotonics and Biofunctional Structures group at Argonne’s CNM. “In larger particles, you see very few of these energetic electrons with energies near the photon energy. So you need a smaller particle.”

The researchers simulated the material to determine the structural geometry and spectral conditions that would create the largest number of hot electrons. The winning combination: silver nanocubes and gold films separated by aluminum oxide spacers. The coupling between the silver nanocubes and gold film across the spacer layer produces a large local enhancement of the light intensity. This, in turn, allows the winning nanostructure to crank out hot electrons better than its competitors.

“One of the key advances is our ability to produce energetic electrons over a very broad spectral range — from the ultraviolet through the visible and into the near infrared,” Wiederrecht said. Processes for converting sunlight to energetic electrons typically work within smaller bands of wavelength. “That’s less useful for solar energy opportunities than if you could create hot electrons over a much broader spectral range,” he said.

The team’s challenge: In most metals, energy cannot transition from one level to another to create high-energy electrons.

“You need to change the direction of the electron motion or change their momentum to enable these transitions,” said Matthew Sykes, a co-author and postdoctoral appointee at Argonne’s CNM.

The team gathered data using a state-of-the-art instrument: the CNM’s transient absorption spectrometer. With it, the team measured the rate of change in the concentration of hot electrons and determined how and when they lose energy. The data they collected could enable researchers to discover clues about how to counteract the loss or find a way to extract the hot electrons before they lose energy. The data also revealed distinct populations of hot electrons.

“We see multiple, distinct decay rates that are wavelength- and geometry-independent,” Sykes said. The nanomaterial contains differing bands of energy affecting the decay rate of the hot electrons traveling within those bands. The research further revealed that the nanomaterials allow the different types of hot electrons to travel in certain directions.

“We believe these different populations of electrons exhibit different lifetimes, depending on what direction they’re traveling in the material,” Sykes explained. “Think of it as driving a car really fast down the freeway and you’re approaching traffic. If there’s light traffic, you’re not going to encounter another car for some time, so you can maintain a higher speed for a longer time. In heavy traffic, you’re going to have to rapidly slow down. There’s different traffic depending on the direction the electrons are traveling in the metal, and this affects how long the high-energy electrons will live once they’re excited.”

Details of the research, which Argonne co-led along with researchers from Duke University, Ohio University and the University of Electronic Science and Technology of China, appeared in the October 17, 2017, edition of Nature Communications. The study is titled “Enhanced generation and anisotropic Coulomb scattering of hot electrons in an ultra-broadband plasmonic nanopatch metasurface.”