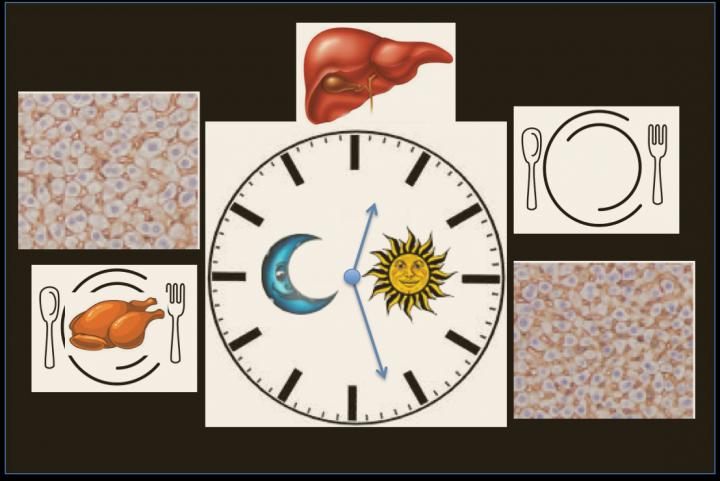 This is a diagram showing the different expression of proteins in liver cells during the day/night cycle. Source: Daniel Mauvoisin/EPFL

Following the day-night cycle, the liver has its own metabolic rhythm. Using cutting-edge proteomics, scientists at EPFL and the Nestlé Institute of Health Sciences have now identified over 500 liver proteins that change in abundance over the course of the day in the cell nucleus, opening a new dimension of metabolism.

Biological processes occurring in our bodies are far from static, but instead the rhythm of most of them is dictated by an internal, 24-hour biological metronome called the ‘circadian clock’. During each day-night cycle, many physiological processes follow oscillatory waves orchestrated by this clock, allowing them to adapt and anticipate the body’s demands at a given time of day. EPFL scientists have now used cutting-edge proteomics to monitor the temporal accumulation of over 5,000 different proteins in the nucleus of mouse liver cells, and have identified over 500 that are connected to the 24-hours cycle. The study, published in Cell Metabolism is the first in this field in terms of scale and resolution, and has significant implications regarding our understanding of the interconnections between rhythmic metabolism and nutrition.

Biology is affected by time

Our bodies follow the day-night, or “diurnal”, cycle, by finely tuning metabolic processes to time of day — this is why we can sleep for hours without going hungry through the night but can barely stand eight hours after breakfast, or why jet lag can sometimes cause digestive problems. Such oscillations are the focus of “chronobiology” a research field that looks at how biological functions are organized in time and how disease could arise when this time organization is disturbed.

This regulation of metabolism is connected to how our genes produce proteins. Many genes follow our circadian clock by adjusting the rate at which they produce proteins, and knowing which genes do this would help us understand how metabolism changes over the course of a day. Unfortunately, even though the human genome was mapped out more than a decade ago, investigating how genes control the production of proteins on a time-dependent scale is still difficult, mostly because of the sheer number of proteins present in a cell.

Felix Naef at EPFL and Frédéric Gachon at the the Nestlé Institute of Health Sciences, have now made a breakthrough in our understanding of time-dependent metabolism. Working only the nuclei of liver cells, the scientists identified 5000 proteins of which more than 500 were affected during the diurnal cycle; more specifically, the proteins entered and left the nucleus over the course of the day. In addition, they found that key cellular functions such as DNA repair, ribosome biogenesis, cell cycle and chromosome regulation (polyploidy) were also affected by diurnal regulation.

To counteract the huge complexity of the proteome, the researchers only focused on the cell’s nucleus instead of the entire cell. The nucleus is where genes produce proteins that are then sent to various locations around the cell. As such, the nucleus is very sensitive to environmental and biochemical signals, and can translate these into molecular responses by controlling protein production.

The scientists used biochemical techniques to isolate the nuclei from liver cells taken from mice with and without a functioning circadian clock. Having isolated the nuclei, they extracted all the proteins from them and analyzed them with mass spectrometry.

Like genomics for genes, proteomics is the field of digital biology where computers are used to create detailed databases and maps of the complete set of an organism’s proteins. The scientists used a technique called SILAC coupled with high-resolution proteomics, which can efficiently quantify proteins — in this case, the proteins are quantified in the nucleus at different time-points throughout a 24-hour cycle. By doing this, they were able to get a global picture of how the diurnal cycle affects protein accumulation in the liver nucleus. “

While many studies approach physiological functions statically, our temporal approach gave us unprecedented insights into how metabolism cycles over a day,” says Felix Naef. “We were surprised by how pervasively nuclear functions in liver are influenced by the day and night and feeding cycles.”

“The study also shows that this quantitative proteomics approach is an excellent tool for systematic analysis of cell functions,” says Frédéric Gachon. “This would not be feasible with conventional proteomic techniques.”