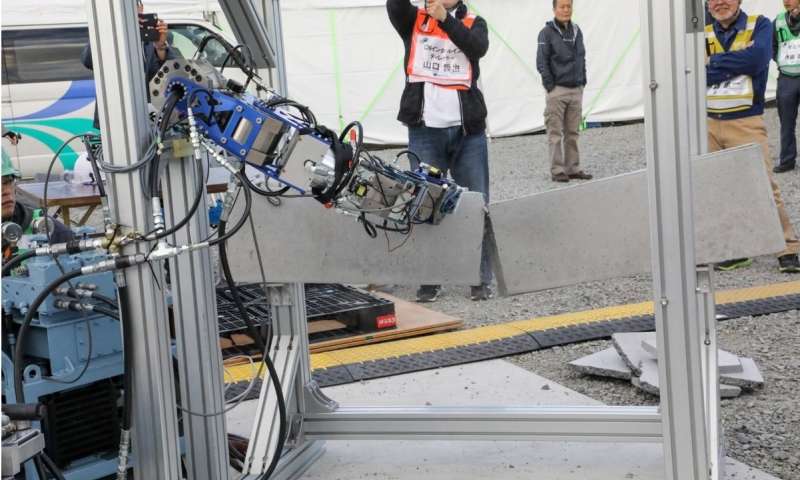 This figure shows a seven-axis hydraulic robot arm breaking concrete slabs, each 30 mm thick. This is a prototype for comparison with a four-legged robot also being developed in this project by Waseda University, Meiji University, and others, produced at approximately the same size. It consists of seven of the new hydraulic motors. Credit: Suzumori Laboratory

A research team from the Tokyo Institute of Technology has produced a hydraulic actuator that could enable robots to perform better in disaster response environments.

Most hydraulic actuators developed today are for industrial machinery, such as power shovels, and are too large and heavy to use for robots to operate in harsh conditions.

The new hydraulic actuators offer increased power and shock resistance at a much smaller size with a diameter between 20 and 30 millimeters when compared to conventional electric motors.

The new actuators also produce a higher output with smoother controls than other models, enabling robots to operate in more difficult conditions while maintaining a gentle touch.

One of the keys to the improved actuators is a high force-to-mass ration, which is caused by a unique design, along with a drive pressure of 35 MPA and titanium and magnesium alloys. The cylinder also operates at much lower pressures than normal JIS cylinders.

Conventional hydraulic cylinders and motors have stiff seals between the piston and the cylinder to seal in the fluid. This causes a substantial amount of friction that prevents smooth movements and control of force.

The hydraulic actuator is the result of the Tough Robotics Challenge, organized by the Impulsing Paradigm Change through Disruptive Technologies Program (ImPACT) of the Cabinet Office of Japan, which allows entities to conduct research with the goal of creating robots for tough operations, even in extreme disaster sites.

In testing, the researchers were able to use a seven-axis hydraulic robot arm to break 30-millimeter thick concrete slabs.

The researchers established the Tokyo Tech Venture H-MUSCLE Corporation to pursue applications for the actuator and ship product samples to domestic manufactures beginning in February 2019. ImPACT has built several tough robot prototypes to test potential applications for the hydraulic actuator.