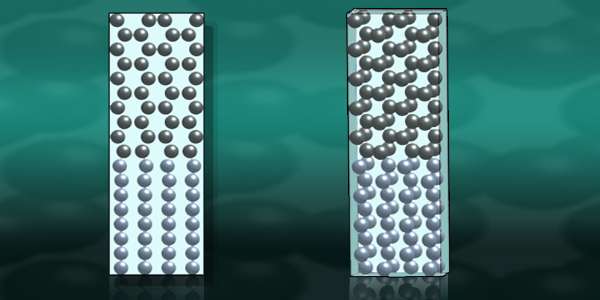 Ten layers of hexagonal iron (dark gray) above eight layers of cubic iron (pale blue-gray). Each layer can transform from one structure to the other by pinching pairs of adjacent atoms toward or away from one another. Lawrence Livermore researchers calculated the structural transformation of iron, showing how it springs back to shape under pressure. (Credit: Lawrence Livermore National Laboratory)

A team of Lawrence Livermore National Laboratory (LLNL) physicists has performed a series of calculations shedding light on an unexpected way that iron transforms under dynamic compression.

In a paper published in Physical Review Letters, the team describes first-principle calculations on two solid phases of iron, as well as on intermediate crystal structures along the transformation path from one phase to the other. The calculations involve a carefully parameterized model for magnetic fluctuations (i.e., electron spin waves), including the effect of moving the iron nuclei as the material is squeezed in a shock experiment.

“In these original shock experiments, a single crystal of iron transforms under compression and then springs back (for the most part) to the original, intact lattice,” said LLNL material scientist Michael Surh, lead author of the most recent research. “This unique, reversible behavior has defied understanding for years.”

This fast, reversible transition was actually predicted by large-scale molecular dynamics (MD) simulations at Los Alamos, but neglected the role of magnetism. Yet, more accurate, first-principle, magnetic calculations performed for iron by LLNL’s Babak Sadigh and Surh implied much slower transformations. And more recent shock compression experiments performed by LLNL’s Jonathan Crowhurst and another team at the Lab showed that this transformation can take much longer than predicted by MD.

To put this in perspective, it also helps to realize how startling that original experiment is. Usually a first order solid-solid structural transformation is slow and irreversible. You start by squeezing a single, near-perfect crystal; it randomly initiates a structural transformation in isolated regions, and those isolated regions then grow together. This creates a polycrystalline new phase. If you then transform the material back to the old phase, it stays polycrystalline. The original, single crystal is lost. To make an analogy, the original, crystalline 3-D lattice is like a single cloth that transforms to some different weave, along the way being stretched and torn into small patches that get rewoven and sewn together haphazardly. When it transforms back to the original weave, the haphazard patches remain, and the original, whole cloth has been destroyed.

But that’s not what happened with these single crystals of iron. Here, the transformation is virtually seamless.

“This reversible transformation is reminiscent of what happens in a shape-memory alloy. Such materials can change linear dimensions by almost 10 percent and then reversibly change back,” Suhr said. “It turns out that the different (fast versus slow, reversible versus irreversible) behavior seen in iron depends on its changing magnetism.”

The researchers predict that if iron is compressed uniformly along one direction, the energy barrier separating different phases remains sizable even if thermally excited spin waves are included. This makes the initial transformation slow. However, once the interface between two phases is formed, this transformation front can move rapidly, as if there is no barrier at all. They show that this arises from “magnetic frustration,” which is a competition between the tendencies of electron spins to be either aligned or misaligned with those of their neighbors.

The team’s predictions suggest an explanation for the different experiments performed at LLNL. They said future simulations must include magnetic effects to get a fundamental understanding of the intriguing phenomenon.

The work was part of a LDRD project to better understand magnetism from first principles.