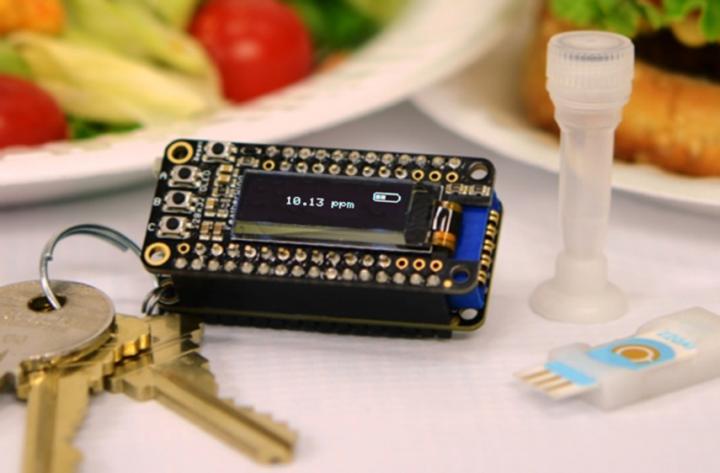 Caption: A portable allergen-detection system with a keychain analyzer could help people with food allergies test their meals. Credit: The American Chemical Society

The stress of going out to eat while dealing with an allergy may soon be eased.

A team of researchers have developed a portable allergen detection system—including a keychain analyzer—which could enable allergy sufferers to detect cross contamination in their food before a costly trip to the emergency room.

The majority of people with allergies go through painstaking efforts to avoid the specific food that causes a reaction— which can range from a mild rash to life-threatening anaphylaxis.

However, cross-contamination or mislabeled meals could become problematic when dinning out.

While there are ways to detect these hidden triggers, they require either bulky laboratory equipment or are too slow and don’t pick up on low concentrations.

The new detection system—called integrated exogenous antigen testing (iEAT)—consists of a handheld device to extract allergens from food and an electronic keychain reader for sensing allergens that wirelessly communicates the results to a smartphone.

The device is able to detect five allergens from wheat, peanuts, hazelnuts, milk and egg whites—within 10 minutes at levels even lower the gold standard laboratory assay.

The researchers found that unexpected dishes and beverages from restaurants contained some allergens.

For example, they found gluten in a salad and an egg protein in beer; both could be unexpected to consumers.

The researchers now plan to extend the amount of compounds that can be detected with the device, including other allergens and non-food contaminants such as pesticides.

Adverse food reactions affect between 5 and 15 percent of the population.