Implantable arrays of microchambers show potential capacity for holding and releasing precisely controlled quantities of drugs on command, report A*STAR researchers with colleagues in Singapore, Russia, and the United Kingdom.

“This near-infrared light is the perfect way to trigger drug release as it has the maximum penetration into biological tissues,” says Maxim Kiryukhin of the A*STAR Institute of Materials Research and Engineering.

The required wavelengths fall within the ‘therapeutic window’ that allows light for medical uses to reach safely into the body.

The team make the microchambers from composites of polymers and graphene oxide.

The lithography step makes templates with a desired pattern of microwells imprinted into their surface. Layers of polymers and graphene oxide are then built up on the templates to make a composite material.

The templates can be dissolved or peeled away, creating the polymer/graphene-oxide chambered arrays that can be sealed with a layer of plastic.

If they are to contain drugs for delivery into the body, the chambers need to be mechanically robust.

“Failure, followed by sudden release of the entire drug payload, could be catastrophic,” Kiryukhin points out.

Incorporating graphene oxide layers into the polymer layers is the critical innovation that makes the chambers sufficiently stable and responsive to near-infrared light. 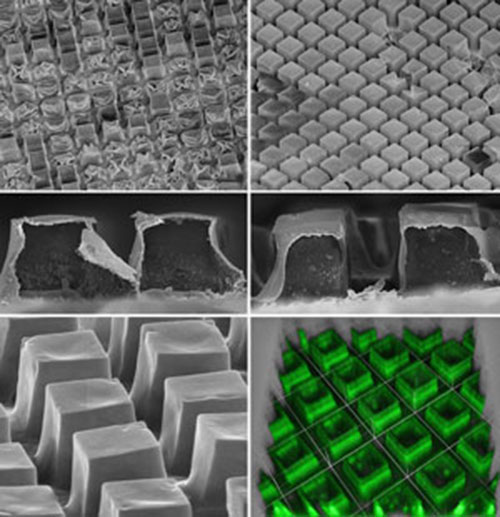 The researchers have already developed techniques that can be used to load the chambers with a range of chemical solutions; selected chambers can then be disrupted using targeted laser light. This would give clinicians fine control over the rate of drug release to suit different patients and conditions.

This proof-of-concept work lays the foundations for moving to tests with real drugs in animals and then humans. Kiryukhin explains that the team are relying on their collaborating research groups in the UK, China, and Russia to address this challenge.

“We are interested in using the chambered arrays in sensing technologies, such as detecting the level of freshness of food or diagnosing the condition of wounds and diseased tissues,” Kiryukhin explains.

The microchambers could release a signal, such as fluorescence, in response to the changes being sensed, for example.

The A*STAR-affiliated researchers contributing to this research are from the Institute of Materials Research and Engineering.