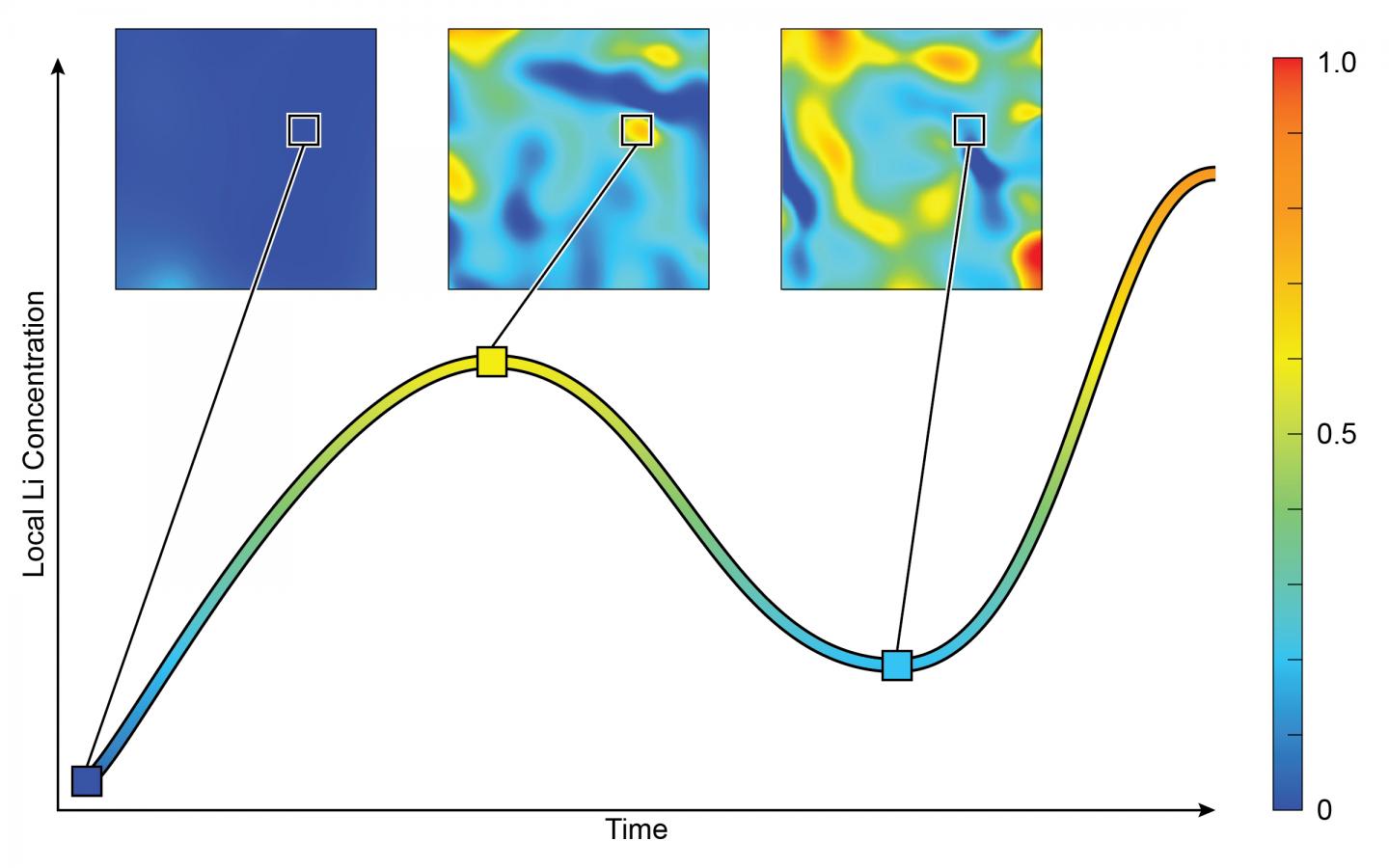 A surprising discovery of how lithium moves within individual nanoparticles could lead to batteries that charge faster and last longer for consumer electronics.

Researchers from the U.S. Department of Energy’s Brookhaven National Laboratory and several universities have found the concentration of lithium inside individual nanoparticles reverse at a certain point, rather than constantly increasing.

“If you have a cell phone, you likely need to charge its battery every day, due to the limited capacity of the battery’s electrodes,” Esther Takeuchi, a SUNY distinguished professor at Stony Brook University and a chief scientist in the Energy Sciences Directorate at Brookhaven Lab, said in a statement. “The findings in this study could help develop batteries that charge faster and last longer.”

Lithium-ion batteries contain particles whose atoms are arranged in a lattice—a periodic structure with gaps between the atoms. When a lithium-ion battery supplies electricity, lithium ions flow into empty sites in the atomic lattice.

“Previously, scientists assumed that the concentration of lithium would continuously increase in the lattice,” Wei Zhang, a scientist at Brookhaven’s Sustainable Energy Technologies Department, said in a statement. “But now, we have seen that this may not be true when the battery’s electrodes are made from nano-sized particles.

“We observed the lithium concentration within local regions of nanoparticles go up, and then down—it reversed,” he added.

Electrodes are often made from nanoparticles to increase a battery’s power density. However, scientists have been unable to fully understand how the electrodes function because of their limited ability to watch them work in action.

Now, with a combination of experimental tools, the scientists were able to image reactions inside the electrodes in real time.

“Similar to how a sponge soaks up water, we can see the overall level of lithium continuously increase inside the nano-sized particles,” Feng Wang, the leader of this study and a scientist in Brookhaven’s Sustainable Energy Technologies Department, said in a statement. “But unlike water, lithium may preferentially move out of some areas, creating inconsistent levels of lithium across the lattice.”

The uneven movement of lithium might have lasting, damaging effects because it strains the structure of the active materials in batteries and can lead to fatigue failure.

“So each time you charge and drain a battery, its active component will be stressed, and its quality will degrade over time,” he added. “Therefore, it is important to characterize and understand how lithium concentration changes both in space and time.”

The team combined transmission electron microscopy (TEM) experiments with X-ray analyses to analyze the structure of the materials. They also developed a nanoscale model battery that could mimic the function of lithium-ion batteries that would fit into a TEM, which were confirmed by computer simulations.

“We initially thought that the reversal mechanism was similar to those previously proposed, which stemmed from the interactions between nearby particles,” Katsuyo Thornton, a professor of materials science and engineering at the University of Michigan, who led the theoretical effort, said in a statement. “However, it turned out a concentration reversal within a single particle could not be explained by existing theories, but rather, it arises from a different mechanism.

“Simulations were critical in this work because, without them, we would have made an incorrect conclusion,” he added.