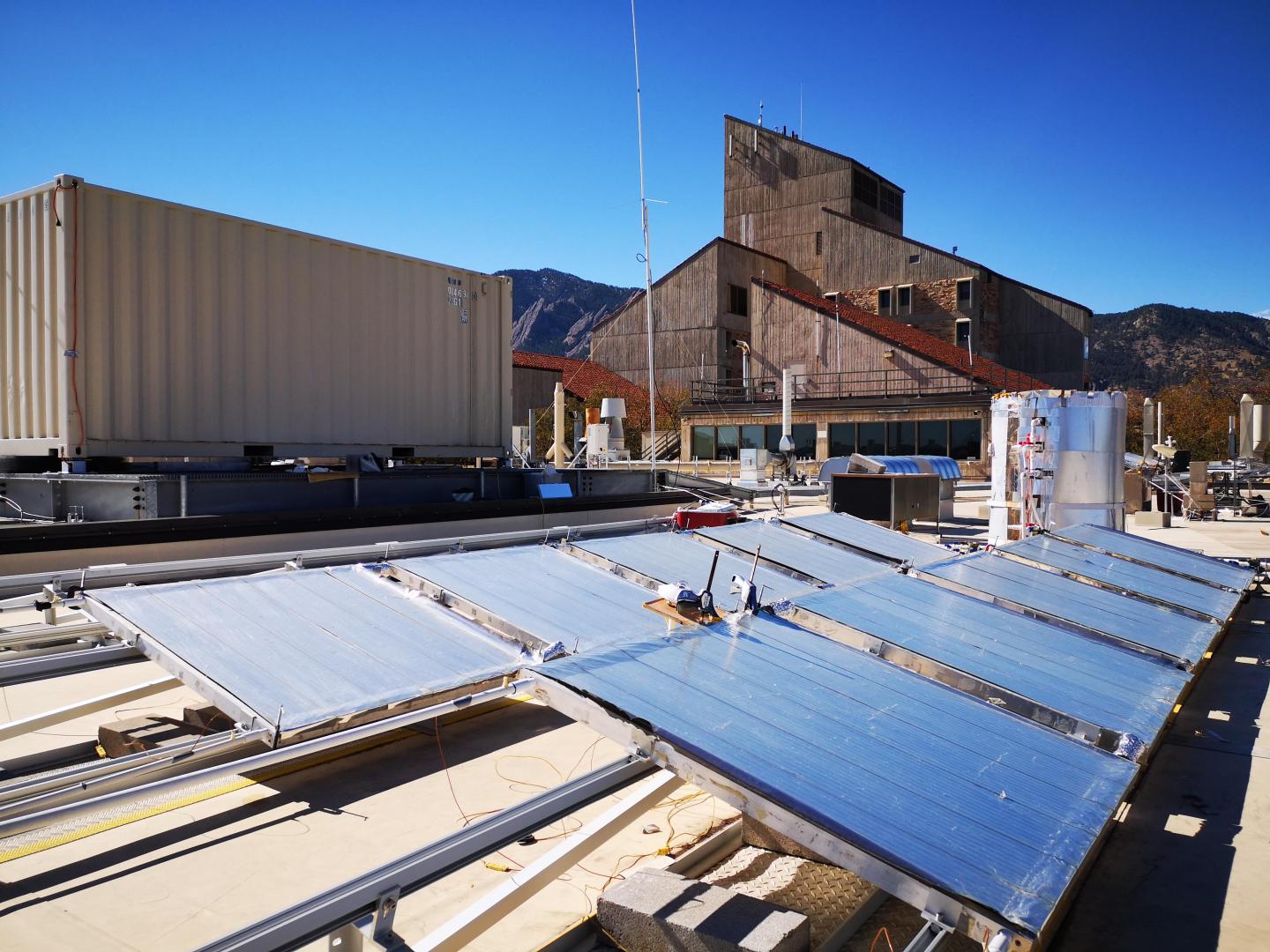 An array of RadiCold cooling modules on the roof of a building on the University of Colorado Boulder campus.

University of Colorado Boulder and University of Wyoming engineers have successfully scaled up an innovative water-cooling system capable of providing continuous day-and-night radiative cooling for structures. The advance could increase the efficiency of power generation plants in summer and lead to more efficient, environmentally-friendly temperature control for homes, businesses, utilities and industries.

The new research demonstrates how the low-cost hybrid organic-inorganic radiative cooling metamaterial, which debuted in 2017, can be scaled into a roughly 140-square-foot array–small enough to fit on most rooftops–and act as a kind of natural air conditioner with almost no consumption of electricity.

“You could place these panels on the roof of a single-family home and satisfy its cooling requirements,” said Dongliang Zhao, lead author of the study and a postdoctoral researcher in CU Boulder’s Department of Mechanical Engineering.

The findings are described today in the journal Joule and take advantage of natural radiative cooling principles.

“As Earth’s temperature warms due to the absorbed heat from the sunlight during the day, it continuously emits infrared light to the cold universe all the time,” said Professor Ronggui Yang of Mechanical Engineering and lead author of the study. “During the night, Earth cools down due to the emission without the sunshine.”

The researchers’ film-like material reflects incoming almost all sunlight while still allowing an object’s stored heat to escape as much as possible, keeping it cooler than ambient air even in the midday sun.

“We can now apply these materials on building roof tops, and even build large-scale water cooling systems like this one with significant advantages over the conventional air conditioning systems, which require high amounts of electricity to function,” said Associate Professor Gang Tan of the University of Wyoming’s Department of Civil and Architectural Engineering.

The researchers tested their system outdoors in a variety of weather conditions, including wind, precipitation and humidity. In experiments conducted in August and September 2017, their proprietary RadiCold module kept a container of water covered by the metamaterial 20 degrees Fahrenheit cooler than the ambient air between 12:30 p.m. and 3 p.m., the most intense summer sunlight of the day.

The researchers also introduced an element of dynamic scheduling to their technology, anticipating that structures such as offices may have limited or no cooling demand at night. In a building-integrated system, however, a cold storage unit could be added to capture the cold through heat transfer fluid such as water in this system and allow it to be retrieved during the subsequent day to reduce the cooling strain during peak demand periods.

“We have built a module that performs in real-world, practical situations,” said Yang. “We have moved quite far and fast from a materials level to a system level.”