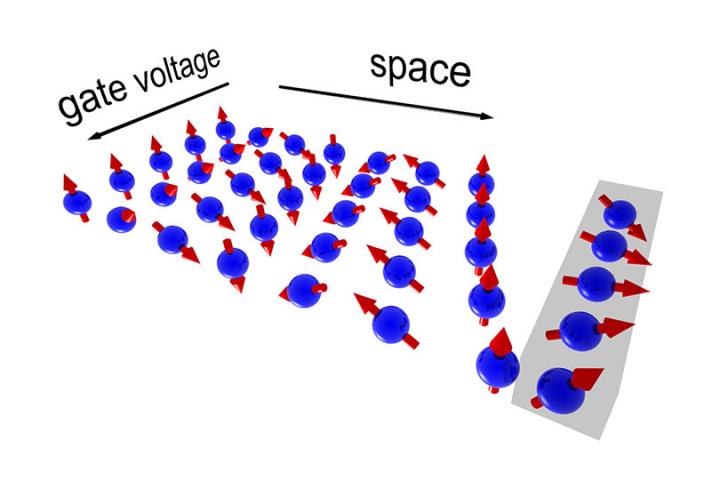 Electrons rotate on their way through the chip in a spiral pattern. Adjustments in the voltage lead to changes in the wavelengths of this pattern and thus the orientation of the spin can be controlled. At a specific location (gray box) the electron spin has a different orientation depending on the voltage. (Credit: University of Basel, Department of Physics)

Physicists have developed a new technique that uses electrical voltages to control the electron spin on a chip. The newly-developed method provides protection from spin decay, meaning that the contained information can be maintained and transmitted over comparatively large distances, as has been demonstrated by a team from the University of Basel’s Department of Physics and the Swiss Nanoscience Institute. The results have been published in Physical Review X.

For several years, researchers have been trying to use the spin of an electron to store and transmit information. The spin of each electron is always coupled to its motion, i.e. its orbit within the chip. This spin-orbit coupling allows targeted manipulation of the electron spin by an external electric field, but it also causes the spin’s orientation to decay, which leads to a loss of information.

In an international collaboration with colleagues from the US and Brazil, scientists from the University of Basel’s Department of Physics and the Swiss Nanoscience Institute, headed by Professor Dominik Zumbühl, have developed a new method that allows for targeted spin manipulation without the accompanying decay.

The scientists have developed a chip on which an electron rotates uniformly in its orbit through the material without decay of the spin. The spin’s orientation follows a spiral pattern similar to a helix. If the voltages applied by two gate electrodes change, it affects the wavelength of the helix; the orientation of the spin can thus be influenced by a voltage change.

The Rashba and Dresselhaus fields predominantly determine the helical movement of the spin. In the experiment described above, the Dresselhaus and Rashba fields can be kept at the same level, while the overall strength of the two fields can simultaneously be controlled: in this way, the spin’s decay can be suppressed.

This allows the researchers to use voltages to adjust the spin’s orientation over distances greater than 20 micrometers, which is a particularly large distance on a chip and corresponds to many spin rotations. Spin information can thus be transmitted e.g. between different quantum bits.

Adjusting the fields with electrical voltages

This method is only possible because, as this work showed experimentally for the first time, both the Rashba field and the Dresselhaus field can be adjusted with electrical voltages. Although this was predicted more than 20 years ago in a theoretical study, it has only now been possible to demonstrate it thanks to a newly-developed measurement method based on quantum interference effects at low temperatures near absolute zero. It is expected, however, that the helix will also be able to be controlled with voltages at higher temperatures and even at room temperature.

“With this method, we can not only influence the spin orientation in situ but also control the transfer of electron spins over longer distances without losses,” says Zumbühl. The outstanding collaboration with colleagues from the University of São Paulo, the University of California and the University of Chicago provides the basis for a whole new generation of devices that build on spin-based electronics and create prospects for further experimental work.