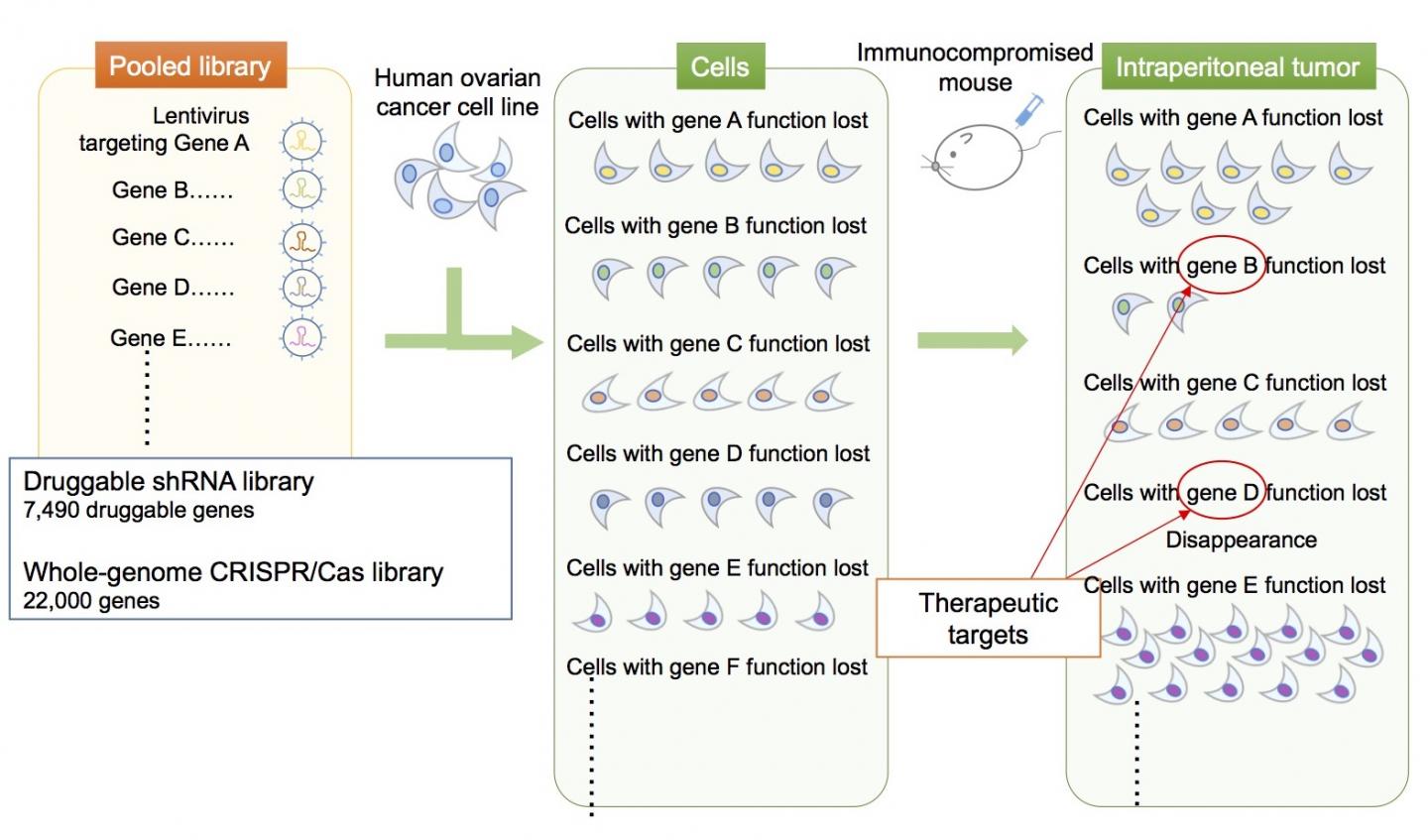 Overview of In vivo pooled library screen of new therapeutic targets for human epithelial ovarian cancer : This is the diagram depicting the overview of in vivo loss-of-function library screens. First, human ovarian cancer cell line was lentivirally transduced with druggable pooled shRNA library or whole-genome CRISPR/Cas9 library, generating large pool of cells with knockdown or knockout of each one gene in the human genome. Then, these transduced cells were implanted in the abdominal cavity of immunodeficient mice and frequency of cells with each short hairpin RNA(shRNA)/single guide RNA(sgRNA) in the formed intraperitoneal tumors were determined by next generation sequencing. Genes targeted by multiple shRNA/sgRNAs, cells of which were significantly depleted in tumors, were identified as promising drug targets. Source: Osaka University

Osaka Researchers, in partnership with other Japanese and U.S. scientists, report a new gene target, KPNB1, for treatment against epithelial ovarian cancer (EOC). EOC is the fifth leading cause of cancer-related deaths in women and has a particularly grim outlook upon diagnosis. They also find that ivermectin exerts an anti-tumor effect on EOC cells by interacting with the KPNB1 gene. Because ivermectin is already approved to treat parasitic infections in patients, experiments for its effectiveness in an anti-cancer regimen is expected to significantly lower costs compared to untested drug compounds. The study can be read in Proceedings of the National Academy of Sciences.

“EOC is a challenging disease to treat because of its heterogeneity. The mortality rate has stayed steady for decades. We need new drugs and also new drug targets,” says Osaka University Gynecologist Michiko Kodama, who first-authored the study.

To search for new drug target genes for EOC, Kodama did two in vivo screenings, one shRNA based and the other CRISPR/Cas9 based. Several were found including ERBB2, but because there are already drugs that target ERBB2 in clinical use, she settled her attention on the gene with the second highest rank in the screening, KPNB1.

Kodama confirmed that KPNB1 has features consistent of an oncogene, finding that its overexpression significantly accelerated EOC cell proliferation and survival, while its inhibition induced apoptosis.

“We found KPNB1 activation and inhibition had a direct effect on the expression of apoptosis factors,” she says.

Adding to the likelihood that this gene has a role in EOC, she found that the prognosis for EOC patients diminished with higher KPNB1 expression.

“This does not show KPNB1 is a cause of EOC, but it does show it could be a target”, she added.

It has been estimated that drug repositioning takes one third the time and cost for an experimental drug to receive federal approval compared with drug discovery. Therefore, to find drug candidates that can suppress the oncogenetic properties of KPNB1, Kodama sought only clinically-approved drugs, settling on ivermectin.

“Ivermectin inhibits importin /-mediated nuclear transport. KPNB1 is a member of the importin family,” she explains, adding that this family imports proteins into the cell nucleus.

She found that ivermectin had pro-apoptotic effects in EOC cells, but not if the KPNB1 activity was already artificially suppressed. Moreover, ivermectin had a synergistic effect when combined with paclitaxel, the currently preferred drug for EOC treatment.

Because EOC cancer is heterogeneous, the best therapeutic regimens will likely involve a combination of drugs. Through comprehensive screenings for mutants and clinically-approved drugs, Kodama is hopeful that drug repositioning will bring such regimens to patients faster.

“We do not understand the molecular mechanisms for the synergistic effect. Ivermectin and paclitaxel have been in clinical use for several decades, which should facilitate clinical trials,” she said.