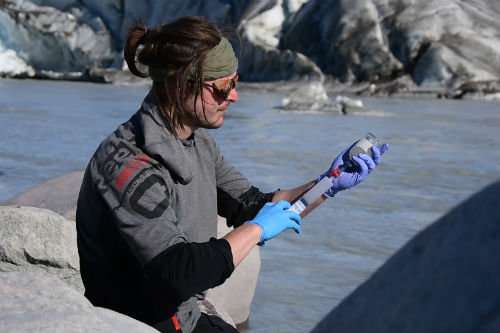 Guillaume Lamarche-Gagnon sampling some water with a syringe into a vial for later methane analysis, with the Glacier visible in the background. Credit: Marie Bulinova

The Greenland Ice Sheet emits tons of methane according to a new study, showing that subglacial biological activity impacts the atmosphere far more than previously thought.

An international team of researchers led by the University of Bristol camped for three months next to the Greenland Ice Sheet, sampling the meltwater that runs off a large catchment (> 600 km2) of the Ice Sheet during the summer months.

As reported in Nature, using novel sensors to measure methane in meltwater runoff in real time, they observed that methane was continuously exported from beneath the ice. They calculated that at least six tons of methane was transported to their measuring site from this portion of the Ice Sheet alone, roughly the equivalent of the methane released by up to 100 cows.

Professor Jemma Wadham, Director of Bristol’s Cabot Institute for the Environment, who led the investigation, said: “A key finding is that much of the methane produced beneath the ice likely escapes the Greenland Ice Sheet in large, fast flowing rivers before it can be oxidized to CO2, a typical fate for methane gas which normally reduces its greenhouse warming potency.”

Methane gas (CH4) is the third most important greenhouse gas in the atmosphere after water vapour and carbon dioxide (CO2). Although, present in lower concentrations that CO2, methane is approximately 20-28 times more potent. Therefore smaller quantities have the potential to cause disproportionate impacts on atmospheric temperatures. Most of the Earth’s methane is produced by microorganisms that convert organic matter to CH4 in the absence of oxygen, mostly in wetlands and on agricultural land, for instance in the stomachs of cows and rice paddies. The remainder comes from fossil fuels like natural gas.

While some methane had been detected previously in Greenland ice cores and in an Antarctic Subglacial Lake, this is the first time that meltwaters produced in spring and summer in large ice sheet catchments have been reported to continuously flush out methane from the ice sheet bed to the atmosphere.

Lead author, Guillaume Lamarche-Gagnon, from Bristol’s School of Geographical Sciences, said: “What is also striking is the fact that we’ve found unequivocal evidence of a widespread subglacial microbial system. Whilst we knew that methane-producing microbes likely were important in subglacial environments, how important and widespread they truly were was debatable. Now we clearly see that active microorganisms, living under kilometres of ice, are not only surviving, but likely impacting other parts of the Earth system. This subglacial methane is essentially a biomarker for life in these isolated habitats.”

Most studies on Arctic methane sources focus on permafrost, because these frozen soils tend to hold large reserves of organic carbon that could be converted to methane when they thaw due to climate warming. This latest study shows that ice sheet beds, which hold large reserves of carbon, liquid water, microorganisms and very little oxygen – the ideal conditions for creating methane gas – are also atmospheric methane sources.

Co-researcher Dr. Elizabeth Bagshaw from Cardiff University added: “The new sensor technologies that we used give us a window into this previously unseen part of the glacial environment. Continuous measurement of meltwater enables us to improve our understanding of how these fascinating systems work and how they impact the rest of the planet.”

With Antarctica holding the largest ice mass on the planet, researchers say their findings make a case for turning the spotlight to the south. Mr Lamarche-Gagnon added: “Several orders of magnitude more methane has been hypothesized to be capped beneath the Antarctic Ice Sheet than beneath Arctic ice-masses. Like we did in Greenland, it’s time to put more robust numbers on the theory.”