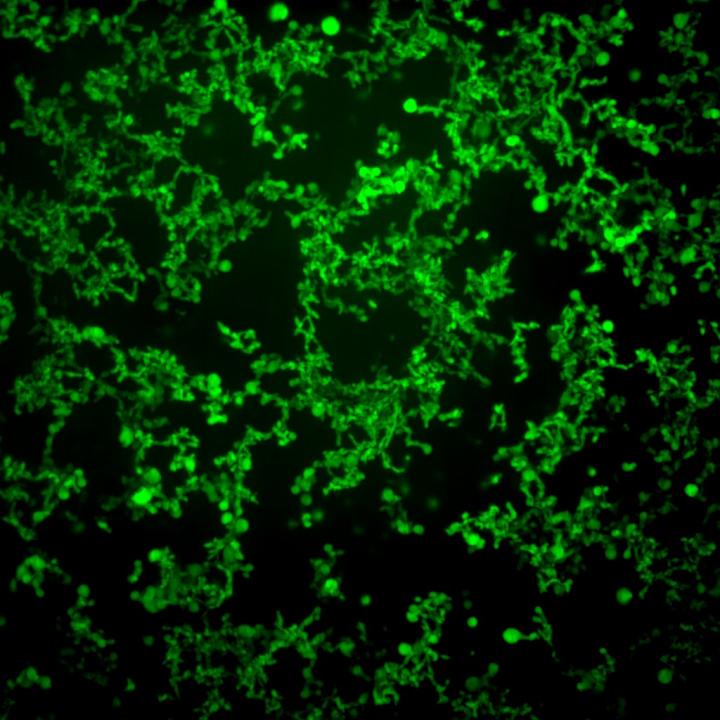 Biomedical engineers from Duke University have demonstrated a new approach to making self-assembled biomaterials that relies on protein modifications and temperature. The hybrid approach allows researchers to control self-assembly more precisely, which may prove useful for a variety of biomedical applications from drug delivery to wound healing.

The research appears online on March 19 in Nature Chemistry.

Biomaterials have broad applications across the fields of tissue engineering, regenerative medicine and drug delivery. Protein- and peptide-based materials are attractive for these applications because they are non-toxic, biodegradable and have a well-defined composition. But these biomaterials are limited to the 20 amino acids found in nature.

One strategy to expand the chemical diversity of protein-based materials is post-translational modification (PTM), a powerful set of reactions that nature uses to chemically transform proteins after they are synthesized from genes. PTM can modify specific amino acids in proteins or add non-protein structures, such as sugars and fatty acids.

"Nature combines different chemical alphabets to make very sophisticated materials," said Ashutosh Chilkoti, the chair of the BME department at Duke and primary author of the paper. "One way it does this is by combining the amino acid vocabulary of proteins with other very different alphabets -- sugars and fats are just two examples of the many hundreds of such PTMs. As materials scientists, we have not taken advantage of nature's methods to make hybrid materials, and this provided the inspiration for this research."

To make such a hybrid material with useful biomedical properties, researchers in the Chilkoti lab focused on creating a series of lipid-modified polypeptides, also called fatty-acid-modified elastin-like polypeptides, or FAMEs.

When a lipid is fused to a peptide sequence, the different physical properties of the lipid and peptide result in the formation peptide amphiphiles, or PAs. Typical PAs can self-assemble into diverse structures like long fibers, making them useful as scaffolds for tissue engineering. However, this happens spontaneously and these materials cannot be injected into the body but instead have to be implanted.

The research team added another useful biomaterial, elastin-like polypeptide (ELP), because it can change from a soluble state to an insoluble state, or vice-versa, depending on temperature.

Using three components -- a lipid myristoyl group, a beta-sheet-forming peptide sequence, and an elastin-like polypeptide (ELP) -- the researchers created a hybrid biomaterial, the FAME polypeptide, that changes from molecules floating in solution into a solid material, simply by raising the temperature.

"Attachment of lipids to short sequence of peptides, typically 5-20 amino acids, have been investigated for many years, but combining large biopolymers with lipids had not been explored," said Davoud Mozhdehi, a postdoctoral fellow in the Chilkoti lab. "What distinguishes FAMEs from PAs is the presence of this temperature-sensitive biopolymer with much longer length, typically 200-600 amino acids, in the form of the ELP."

"That short beta sheet-forming peptide sequence only makes up about two percent of the entire sequence," Mozhdehi said. "But it has a huge impact on the self-assembly behavior. This hybrid material retains thermal responsiveness of the ELP and the hierarchical self-assembly of the PA, creating a unique material with programmable behavior."

"By combining a PA with an ELP, we get a molecule that can go from liquid to solid within seconds with a small rise in temperature", said Chilkoti. "This opens up new applications in medicine, where a these materials can be injected as a liquid that would then turn into solid inside the body."

This proof-of-concept builds upon previous research from the Chilkoti lab, in which researchers explored new ways to use enzymes to synthesize hybrid lipid-peptide polymer fusions between ELPs and lipids using E. coli bacteria.

"Others had previously found that you can take a specific enzyme out of complex eukaryotic cells and get it to function in E. coli," said Kelli Luginbuhl, a research scientist in the Chilkoti lab. "Normally, this enzyme permanently attaches a lipid group to a protein, and we were curious whether we could use the enzyme to make lipid-biopolymer hybrid materials. When Davoud Mozhdehi heard about this project, he had an idea to incorporate a short structure-directing peptide sequence into the mix."

Researchers at the Max Planck Institute for Polymer Research aided the Duke team by completing advanced material characterization. "Upon hearing about the multiple structures formed by these biomanufactured polymers, we were quite excited to participate in this collaborative project to further elucidate the mechanism of temperature-triggered hydrogel and aggregate formation in these materials," the Max Planck team said in a statement. "Our contribution of temperature-dependent, high-resolution atomic force microscopy and temperature-dependent spectroscopy nicely complemented the work from the Duke group, and together we were able to decipher the molecular transformations by which these unique biopolymers form hierarchical materials."

"These building blocks are known in the field and now we have shown that combining them by forming covalent bonds, results in synergistic properties and self-assembly," Mozhdehi said. "We hope to expand this method to other lipids and proteins and develop new tools and materials for the biomedical applications."