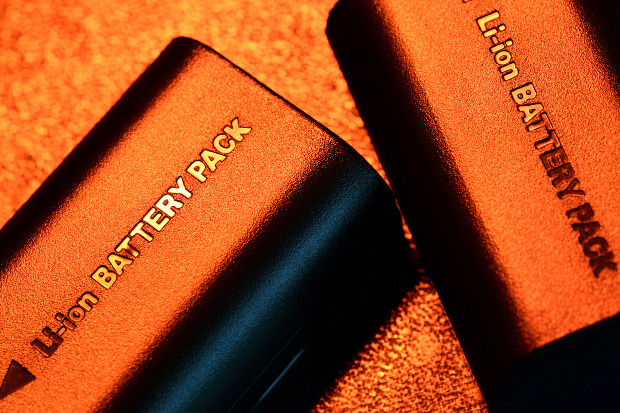 VCU researchers are working to improve conductivity and safety in lithium-ion batteries, which are used to power many electronic devices, including laptops, artificial hearts and cell phones. Credit: VCU

A new wave of lithium-ion batteries that are more powerful, and ultimately safer, may be on the way.

Lithium-ion batteries are commonly used in electronic devices including laptops, iPods, satellites, artificial hearts and cell phones. However, the liquid-state electrolytes that help carry charges from one battery electrode to another is often instable, despite their superior conductivity.

“Theoretically, you can have your cake and eat it too, when it comes to the stability and conductivity,” Puru Jena, Ph.D., a distinguished professor in the Department of Physics in the College of Humanities and Sciences at VCU, said in a statement.

The researchers produced a computational model where a single negative ion is removed and negative cluster ions—groups of atoms with more electrons than protons—replace the absent ion.

Originally, the electrolyte—which belongs to a family of crystals called antiperovskites—contained positive ions made of three lithium atoms and one oxygen atom. The positive ions were joined with a single chlorine atom that was a negative ion.

However, in the computational model the researchers replaced the chlorine atom with a negative cluster ion created by one boron atom and four fluorine atoms joined to the existing positive ions.

They also identified other combinations of negative cluster ions to potentially enhance conductivity.

“Replacing the chlorine ion with cluster ions improves conductivity because these ions are larger and allow the lithium ions to move quickly, as if they were in a liquid,” Hong Fang, a postdoctoral fellow in the Department of Physics at VCU, said in a statement.

The researchers are now searching for collaborators to test their computational model in a laboratory setting for eventual lithium-ion battery applications.