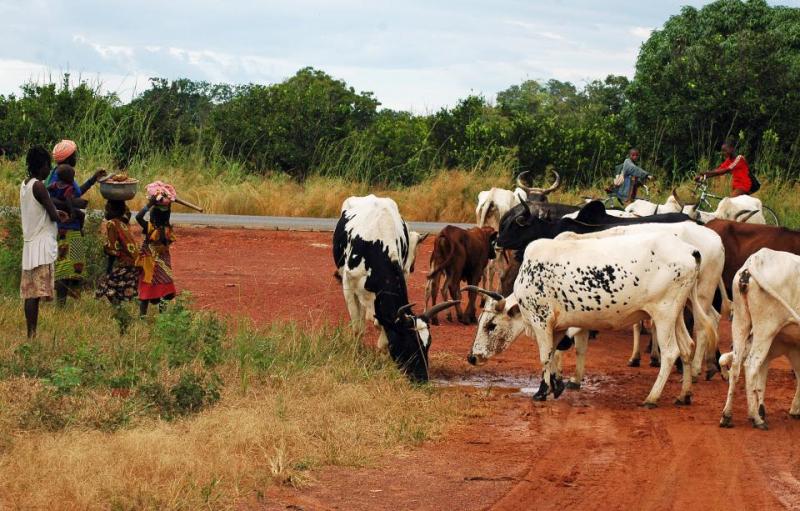 Villagers and cattle along the road near Pimperena in southern Mali. A UC Davis study reports that mosquito preference for human versus animal biting has a genetic basis. Photo: Yoosook Lee/UC Davis

Mosquitoes are more likely to feed on cattle than on humans if they carry a specific chromosomal rearrangement in their genome. This reduces their odds of transmitting the malaria parasite, according to a University of California, Davis, study published Sept. 15 in the journal PLOS Genetics.

Rates of malaria transmission depend on whether mosquitoes bite humans or animals, and whether they rest after that meal in an area where they will encounter pesticides.

Bradley Main, a researcher in the Vector Genetics Lab at the UC Davis School of Veterinary Medicine, and his colleagues investigated whether there is a genetic basis to host choice and resting behavior in Anopheles arabiensis. That species of mosquito has become the primary vector of malaria in east Africa due to its broader host range and the frequent use of pesticide-treated bed nets, which kill other species that live closely with humans.

“Whether there is a genetic basis to feeding preferences in mosquitoes has long been debated,” Main said. “Using a population genomics approach, we have established an association between human feeding and a specific chromosomal rearrangement in the major east African malaria vector. This work paves the way for identifying specific genes that affect this critically important trait.”

The researchers sequenced the genomes of 23 human-fed and 25 cattle-fed mosquitoes collected indoors and outdoors from the Kilobero Valley in Tanzania. They identified a genetic component that contributes to the mosquito’s host choice but not its choice of resting place.

They narrowed down the gene region associated with cattle feeding to a chromosomal rearrangement called the 3Ra inversion.

The study is the first to use genomic tools to find a genetic basis for earlier observations that inversions can be linked to a preference for cattle in mosquitoes.

While the findings provide strong support that the inversion in An. arabiensis is linked to cattle feeding, researchers need to test a larger geographic area to confirm the connection.