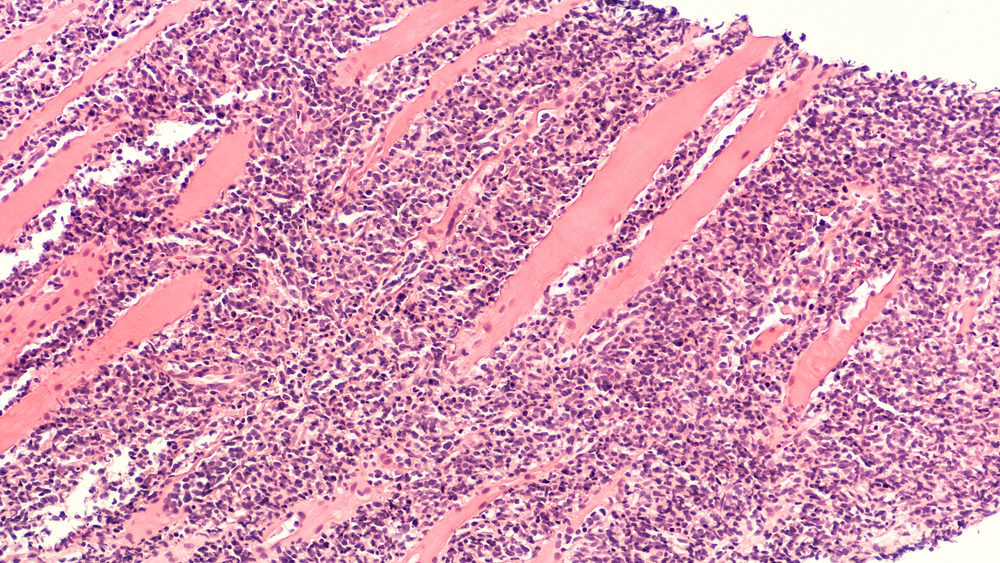 A significant percentage of lymphoma patients undergoing transplants with their own blood stem cells carry acquired genetic mutations that increase their risks of developing second hematologic cancers and dying from other causes, according to a study from Dana-Farber Cancer Institute.

The mutations were found in about 30 percent of 401 patients with non-Hodgkin lymphoma (NHL) whose blood was sampled at the time they received autologous transplants, the scientists reported at the 58th annual meeting of the American Society of Hematology in San Diego, December 5, 2016. Patients older than 60 were more likely to carry the mutations, which occurred in several different genes, and were acquired, not inherited.

Transplant recipients who were mutation carriers had a higher risk – 14.4 percent versus 4.4 percent – of developing a second blood cancer over the next 10 years compared with those lacking the mutation. The second cancers were acute myeloid leukemia (AML) and myelodysplastic syndrome.

Carriers of the mutations were also less likely to survive for 10 years (30.6 percent versus 60.9 percent) than individuals lacking the mutations. The greater mortality in mutation carriers wasn’t only due to second cancers, but was also the result of other conditions such as heart attacks and strokes, for reasons the scientists say aren’t yet clear.

The most commonly mutated gene in the transplant patients was PPM1D, which plays a key role in cells’ DNA damage repair toolkit.

The mutations cause an abnormal condition called CHIP (clonal hematopoiesis of indeterminate potential), an age-related phenomenon that occurs in 10 to 15 percent of patients over age 65. In clonal hematopoiesis, some blood-forming stem cells acquire mutations and spawn clones – subpopulations of identical cells that expand because they have gained a competitive advantage over normal stem cells. Individuals with CHIP don’t have symptoms or obvious abnormalities in their blood counts, but researchers are studying whether CHIP in some cases might represent the earliest seeds of blood cancers.

The new study is the first to systematically look at how CHIP influences outcomes in patients undergoing autologous stem cell transplants, according to the report, whose first author is Christopher J. Gibson, MD, of Dana-Farber. The senior author is Benjamin L. Ebert, MD, PhD, of Dana-Farber/Brigham and Women’s Cancer Center.

Gibson noted that 30 percent of the patients with CHIP had more than one mutation, and those patients had even greater odds of developing second cancers and their overall survival was worse than individuals having only one mutation.

The CHIP mutations may be caused by a combination of aging and prior treatment with chemotherapy for their disease, and could also be related to the lymphoma itself, Gibson said.

The authors said the study findings may have clinical implications. “They suggest the need to specifically study the connection between CHIP and lymphoma more deeply, which could be accomplished by assessing CHIP in patients with newly diagnosed lymphoma prior to the administration of any chemotherapy or mobilizing agents,” they wrote. “They also suggest the need to consider alternative therapeutic approaches” for lymphoma patients who have a high risk of developing second cancers and are being considered for autologous stem cell transplants.