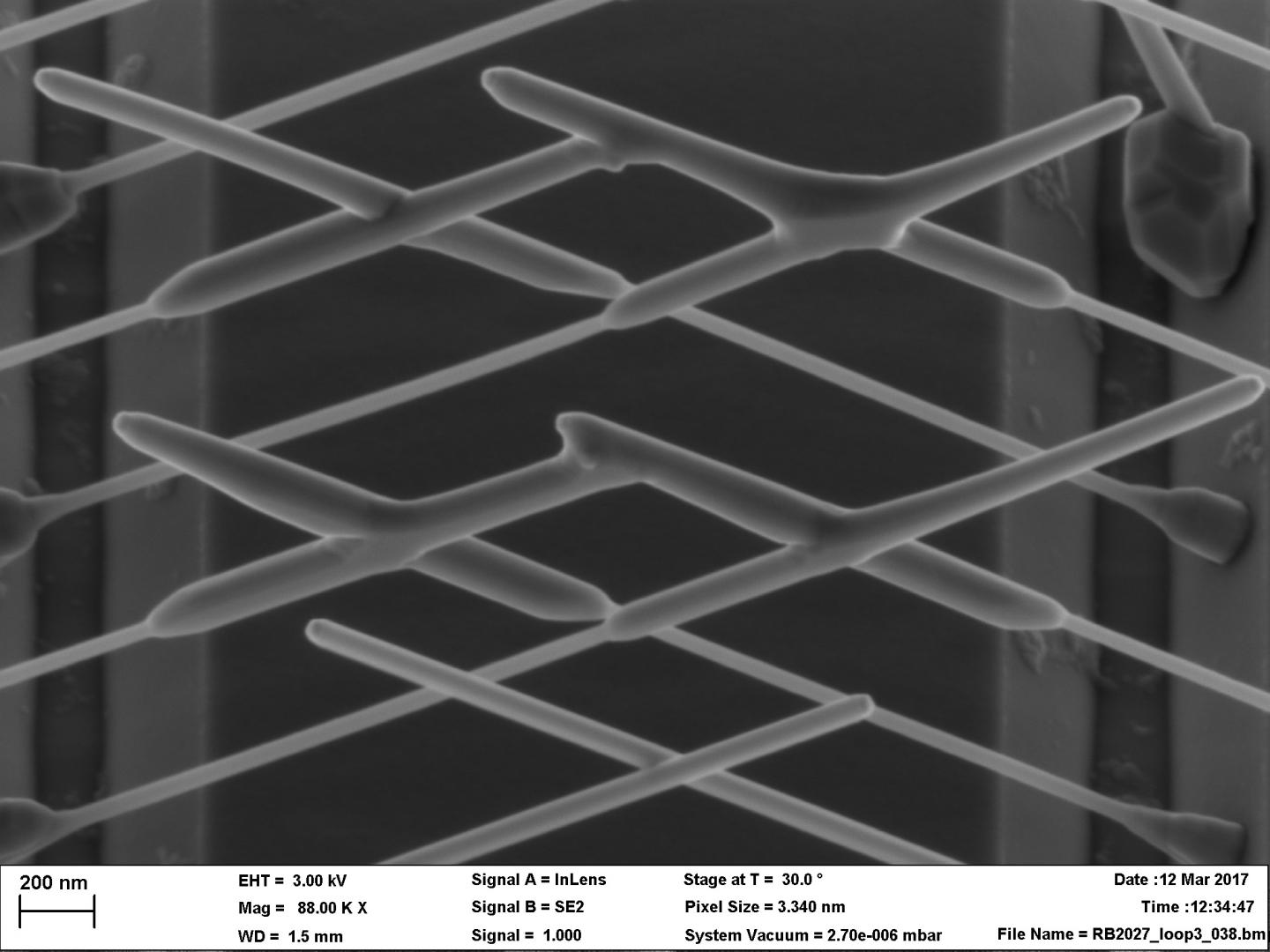 In Nature an international team of researchers from Eindhoven University of Technology, Delft University of Technology and the University of California – Santa Barbara presents an advanced quantum chip that will be able to provide definitive proof of the mysterious Majorana particles. These particles, first demonstrated in 2012, are their own antiparticle at one and the same time. The chip, which comprises ultrathin networks of nanowires in the shape of ‘hashtags’, has all the qualities to allow Majorana particles to exchange places. This feature is regarded as the smoking gun for proving their existence and is a crucial step towards their use as a building block for future quantum computers.

In 2012 it was big news: researchers from Delft University of Technology and Eindhoven University of Technology presented the first experimental signatures for the existence of the Majorana fermion. This particle had been predicted in 1937 by the Italian physicist Ettore Majorana and has the distinctive property of also being its own anti-particle. The Majorana particles emerge at the ends of a semiconductor wire, when in contact with a superconductor material.

While the discovered particles may have properties typical to Majoranas, the most exciting proof could be obtained by allowing two Majorana particles to exchange places, or ‘braid’ as it is scientifically known. “That’s the smoking gun,” suggests Erik Bakkers, one of the researchers from Eindhoven University of Technology. “The behavior we then see could be the most conclusive evidence yet of Majoranas.”

In the Nature paper that is published today, Bakkers and his colleagues present a new device that should be able to show this exchanging of Majoranas. In the original experiment in 2012 two Majorana particles were found in a single wire but they were not able to pass each other without immediately destroying the other. Thus the researchers quite literally had to create space. In the presented experiment they formed intersections using the same kinds of nanowire so that four of these intersections form a ‘hashtag’, #, and thus create a closed circuit along which Majoranas are able to move.

The researchers built their hashtag device starting from scratch. The nanowires are grown from a specially etched substrate such that they form exactly the desired network which they then expose to a stream of aluminium particles, creating layers of aluminium, a superconductor, on specific spots on the wires – the contacts where the Majorana particles emerge. Places that lie ‘in the shadow’ of other wires stay uncovered.

The entire process happens in a vacuum and at ultra-cold temperature (around -273 degree Celsius). “This ensures very clean, pure contacts,” says Bakkers, “and enables us to make a considerable leap in the quality of this kind of quantum device.” The measurements demonstrate for a number of electronic and magnetic properties that all the ingredients are present for the Majoranas to braid.

If the researchers succeed in enabling the Majorana particles to braid, they will at once have killed two birds with one stone. Given their robustness, Majoranas are regarded as the ideal building block for future quantum computers that will be able to perform many calculations simultaneously and thus many times faster than current computers. The braiding of two Majorana particles could form the basis for a qubit, the calculation unit of these computers.

Travel around the world

An interesting detail is that the samples have traveled around the world during the fabrication, combining unique and synergetic activities of each research institution. It started in Delft with patterning and etching the substrate, then to Eindhoven for nanowire growth and to Santa Barbara for aluminium contact formation. Finally back to Delft via Eindhoven for the measurements.