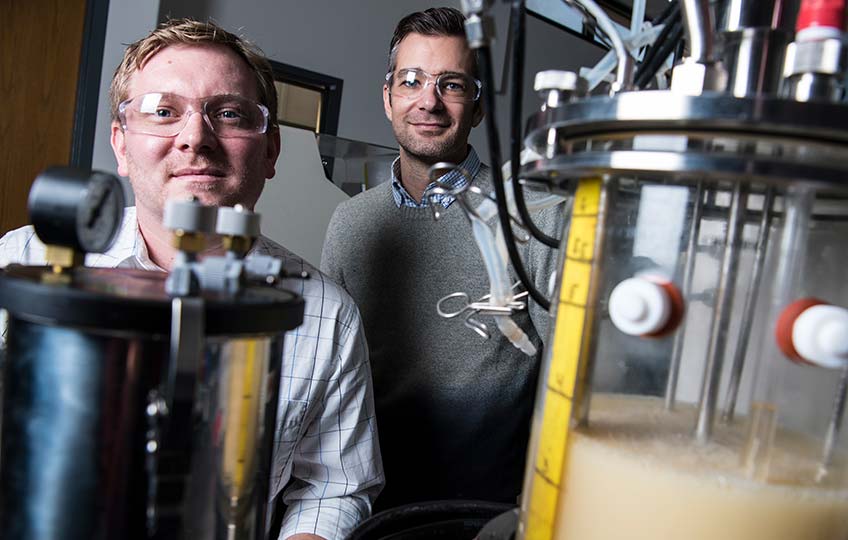 NREL researchers Calvin Henard and Michael Guarnieri are members of a team that set out to discover how a methane-eating organism known as a methanotroph operates. Credit: Dennis Schroeder/NREL

For the first time ever, researchers have modeled a type of bacteria that feasts on methane.

A team led by scientists from the U.S. Department of Energy’s National Renewable Energy Laboratory (NREL) have examined how the bacteria Methylomicrobium alcaliphilum 20ZR—called a methanotroph—eats methane and converts it into valuable product precursors.

“Very little is known about methanotrophic metabolism in general,” Calvin Henard, PhD, a molecular microbiologist at NREL and co-author of the study, said in a statement. “These are the first metabolic models generated for this particular organism, which is one of the most promising biocatalysts that can be used to make products from natural gas-and biogas-derived methane.”

The researchers believe once they define the metabolism, they can manipulate and optimize it for targeted production of fuel and chemical intermediates.

The study was spurred by the potential utility of the bacteria for biocatalysis, improved carbon utilization and simultaneous greenhouse gas mitigation, which could have environmental and health benefits. M. alcaliphilum 20ZR, which uses methane as its only carbon and energy source, could be utilized by the natural gas and waste management industries.

The scientists looked at the production of precursors to nylon to discover if the organism could be engineered to be more effective and efficient. The team used computational and biochemical analyses to study the metabolism of the bacteria that will inform a genetic engineering strategy for the microbe.

“We made assumptions about how that methane was flowing in the bug,” Henard said. “We saw some dogma-challenging differences compared to our initial assumptions.”

The researchers observed routes of carbon flow that they had not previously considered. These routes likely promote the balance between anabolic reactions and redox demands—changes in the oxidation states of the atoms—in the methanotroph.

They now hope to confirm the way methane was used by the methanotroph and guide engineering efforts to produce a more efficient biocatalyst.

“This opens the door for an array of biogas-derived products,” Michael Guarnieri, PhD, a co-author of the study and researcher at NREL, said in a statement. “The nylon precursors are a proof of concept; we’re also targeting production of hydrocarbon fuels, higher alcohols, and additional biopolymers and bio-based materials as potential end products.”