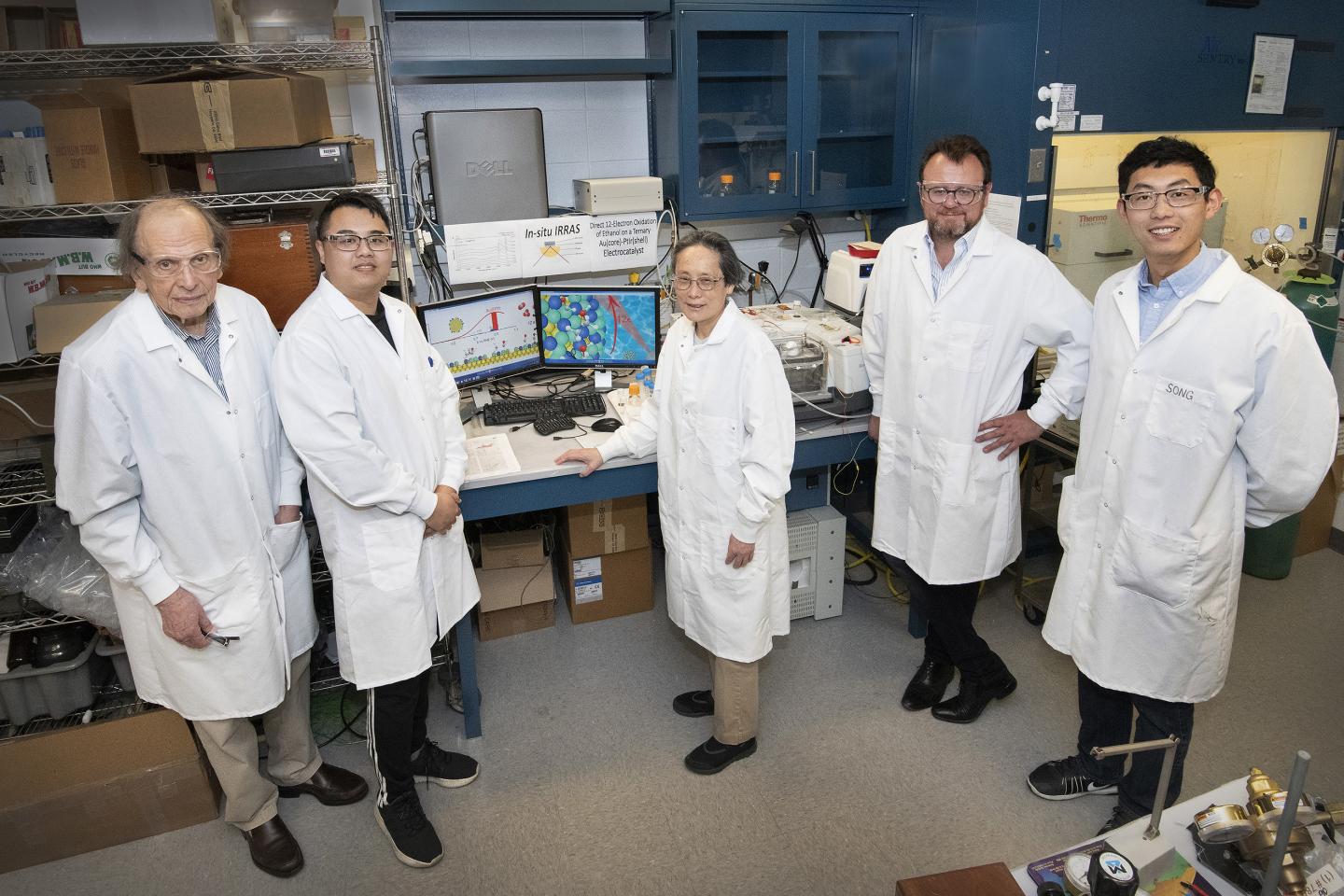 A new core-shell catalyst could overcome some of the ethanol oxidation hurdles and break the carbon-carbon bonds at the right time to draw energy from ethanol.

Scientists from the U.S. Department of Energy’s Brookhaven National Laboratory and the University of Arkansas have created a new catalyst that can steer the electro-oxidation down a chemical pathway to release the full potential of stored energy in ethanol.

“This catalyst is a game changer that will enable the use of ethanol fuel cells as a promising high-energy-density source of ‘off-the-grid’ electrical power,” Jia Wang, the Brookhaven Lab chemist who led the work, said in a statement. “Ethanol fuel cells are lightweight compared to batteries. They would provide sufficient power for operating drones using a liquid fuel that’s easy to refill between flights–even in remote locations.”

The new catalyst was made using a new synthesis technique that co-deposits platinum and iridium on gold nanoparticles to form monoatomic islands across the surface.

“The gold nanoparticle cores induce tensile strain in the platinum-iridium monoatomic islands, which increases those elements’ ability to cleave the carbon-carbon bonds, and then strip away its hydrogen atoms,” Jingyi Chen of the University of Arkansas, who was a visiting scientist at Brookhaven during part of this project, said in a statement.

Electro-oxidation of ethanol can produce 12 electrons per molecule. To achieve that ethanol’s carbon-carbon bonds need to be broken at the exact right time.

“The 12-electron full oxidation of ethanol requires breaking the carbon-carbon bond at the beginning of the process, while hydrogen atoms are still attached, because the hydrogen protects the carbon and prevents the formation of carbon monoxide,” Wang said, adding that several dehydrogenation and oxidation steps are then needed to complete the process.

Previous approaches have resulted in incomplete oxidation that leave the carbon-carbon bonds intact, releasing fewer electrons.  This process also strips off the hydrogen atoms early, ultimately exposing the carbon atoms to the formation of carbon monoxide, poisoning the catalysts ability to function over time.

The researcher’s new catalyst combines reactive elements in a core-shell structure that yield a range of catalytic reactions and ultimately accelerate all the steps needed for oxidation.

The researchers used in stiu infrared reflection-absorption spectroscopy to identify  reaction intermediates and products. They then compared the results produced by catalyst with reactions using a gold-core/platinum-shell catalyst, as well as a platinum-iridium alloy catalyst.

“By measuring the spectra produced when the infrared light is absorbed at different steps in the reaction, this method allows us to track, at each step, what species have been formed and how much of each product,” Zhixiu Liang, a Stony Brook University graduate student and the first author of the paper, said in a statement. “The spectra revealed that the new catalyst steers ethanol toward the 12-electron full oxidation pathway, releasing the fuel’s full potential of stored energy.”

The researchers now plan to develop devices that can incorporate the catalyst, as well as guide the rational design of future multicomponent catalysts for other applications.

The study was published in the  Journal of the American Chemical Society.