Industrial Technology Research Institute (ITRI) recieved a 2017 R&D 100 Award  as well as a Merit in the Special Recognition: Green Tech category for the LCD Waste Recycling System. They were presented both awards at The R&D 100 Awards Gala held in Orlando, Florida on Nov. 17, 2017. See the full list of 2017 R&D 100 Award Winners here.

The R&D 100 Awards have served as the most prestigious innovation awards program for the past 56 years, honoring R&D pioneers and their revolutionary ideas in science and technology.

Submissions for the 2018 R&D 100 Awards are now being accepted. Any new technical product or process that was first available for purchase or licensing between January 1, 2017 and March 31, 2018, is eligible for entry in the 2018 awards. Entries for the R&D 100 Awards can be entered under five general product categories— Mechanical Devices/ Materials, IT/Electrical, Analytical/Test, Process/Prototyping, and Software/Services.

With more and more electronics in the home and the car featuring liquid-crystal display (LCD) screens, reducing the environmental impact once the devices are no longer used is crucial moving forward.

Research has repeatedly shown the harmfulness of the liquid crystal, indium and other heavy metals which LCD panels contain, but currently there is no suitable model for recycling these panels

Researchers from the Industrial Technology Research Institute (ITRI) are working to change that, developing a new LCD Waste Recycling System that is cost-effective, does not produce any waste and will allow manufacturers to save and reuse some of the valuable heavy metals used to create LCD panels. ITRI received a 2017 R&D 100 Award for the technology at the R&D 100 Awards Gala held in Orlando, Florida on Nov. 17, 2017. At the same event, ITRI also received a Merit in the Special Recognition: Green Tech category for its LCD Waste Recycling System.

Chien-Wei Lu, a researcher for ITRI, explained in an interview with R&D Magazine how the new recycling system works.

“LCD panels, which are only a few millimeters thick, contain over ten kinds of materials, making their disposal and recycling especially difficult,” Chien-Wei said. “We thoroughly analyzed the characteristics and reusability of each material contained in LCD panels, and designed a logical separation procedure according to the associations between each material, first separating liquid crystal, indium, and glass, and then developing purification technology for each material which enables the reuse of these materials.”

After removing most of the cell materials, the glasses, which are alkali-free and composed of SiO₂, Al₂O₃, B₂O₃, and others alkaline earth oxides, are collected.

The new method extracts the liquid crystal for reuse, enabling the cycling of indium and the glass that no longer contains liquid crystal.

“Treating waste LCD panels with this system can transform the panels’ material [liquid crystals, indium, and glass] into valuable, reusable products, not only increasing profits but effectively reducing the production of waste material,” Chien-Wei said.

Chein-Wei explained some of the challenges in creating the recycling system.

“The liquid crystals with halogen-substituted aromatics are designed and synthesized for LCD,” Chein-Wei said. “Their production process and their final disposal both cause severe health and environmental impacts. However, people cannot get this information.

Current treatment technologies disassemble LCD devices into multiple components and recycle them according to their materials. However, there is no model for treating LCD panels. 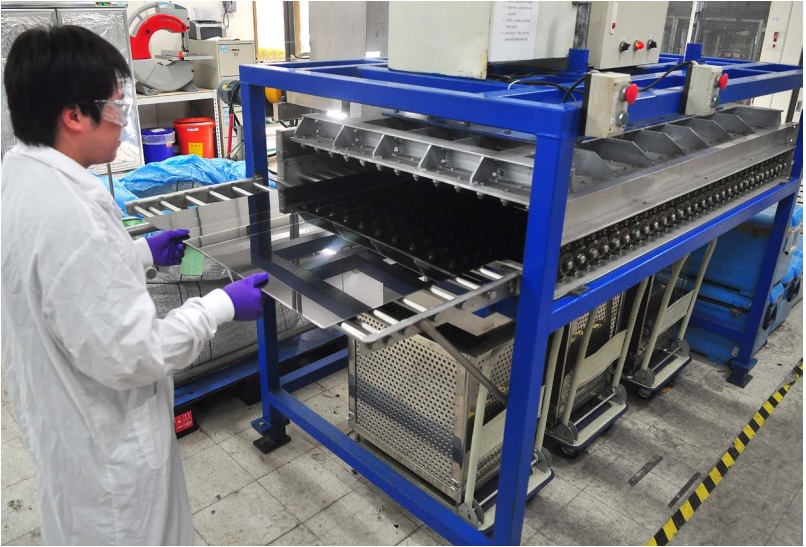 Previous studies have also showed the harmfulness of the liquid crystal, indium and other heavy metals present in LCD panels.

If organisms ingest fat-soluble liquid crystals, they are likely to be stored in organisms without metabolization, leading to diseases in the organs.

To physically process the panels, the panels must be broken down and then added to cement or concrete, which does not remove liquid crystals, indium, tin and molybdenum from the panels. Therefore, the liquid crystals and heavy metals could still enter the environment following rain or washing.

This has led to an increasing number of countries, including Hong Kong and China, to label LCD panels as hazardous waste. This requires future processing of LCD panel waste to be buried on-site, burnt or physically disposed, which increases both the processing costs and the environmental damage.

To test the new technology, ITRI has built a pilot plant that can treat three tons of LCD panel waste per day, producing three kilograms of liquid crystal, 750 grams of indium, and about 2550 kilograms of glass, which can be reused as green construction material or heavy-metal adsorption material.

It is estimated that hundreds of thousands of tons of LCD panel waste are produced annually in North America.