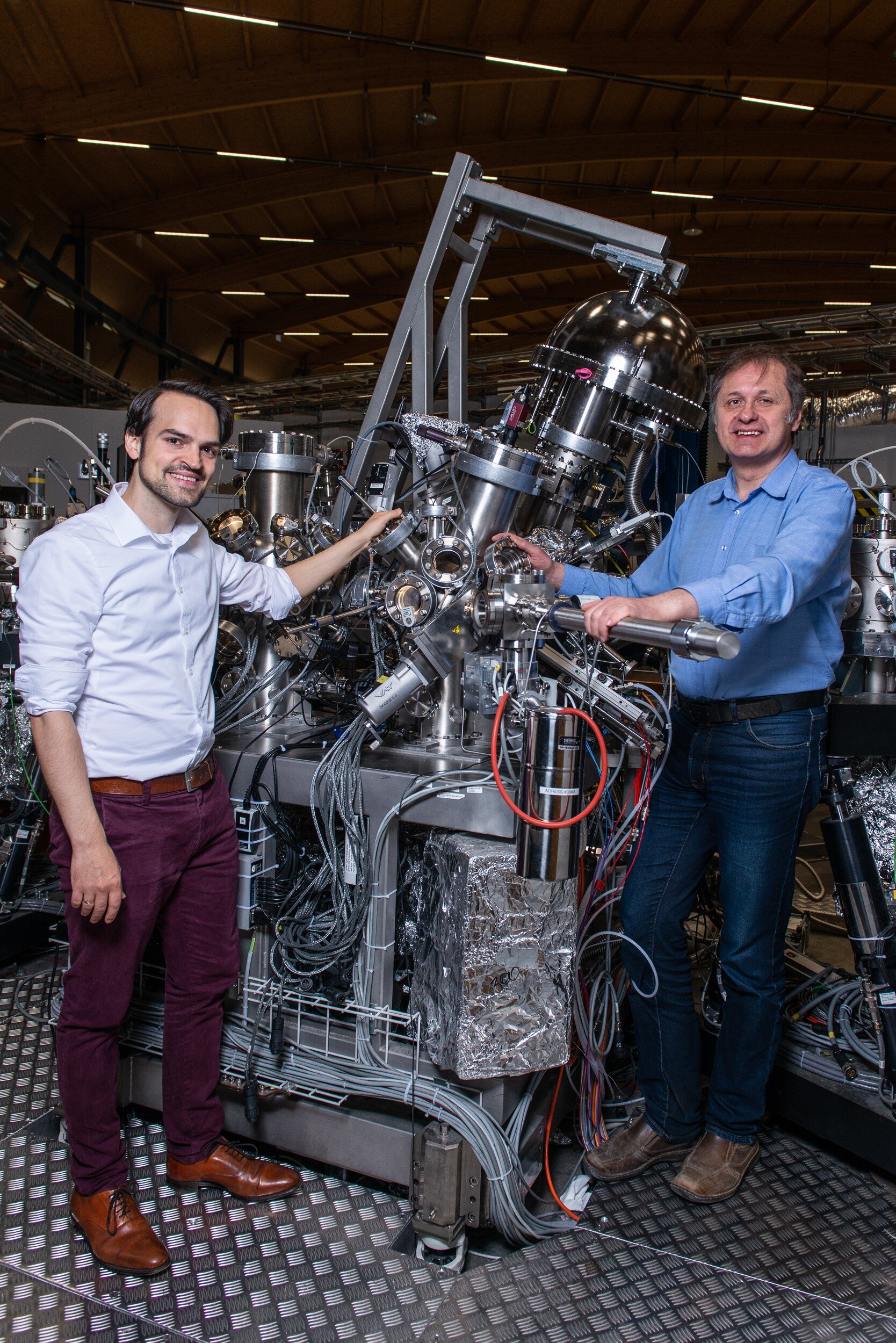 Researchers at PSI have investigated a novel crystalline material that exhibits electronic properties that have never been seen before. It is a crystal of aluminum and platinum atoms arranged in a special way. In the symmetrically repeating unit cells of this crystal, individual atoms were offset from each other in such a way that they—as connected in the mind’s eye—followed the shape of a spiral staircase. This resulted in novel properties of electronic behaviour for the crystal as a whole, including so-called Rarita-Schwinger fermions in its interior and very long and quadruple topological Fermi arcs on its surface. The researchers have now published their results in the journal Nature Physics.

They report a new kind of quasiparticle. Quasiparticles are states in material that behave in a certain way like actual elementary particles. Two physicists, William Rarita and Julian Schwinger, first predicted this type of quasiparticle in 1941, which came to be known as Rarita-Schwinger fermions. These have now been detected experimentally for the first time, thanks in part to measurements at the Swiss Synchrotron Light Source SLS at PSI.

“As far as we know, we are—simultaneously with three other research groups—among the first to see Rarita-Schwinger fermions,” says Niels Schröter, a researcher at PSI and first author of the new study.

The search for exotic electron states

The researchers discovered the quasiparticles while investigating a novel material—a special aluminum-platinum crystal. “When viewed with the naked eye, our crystal was simply a small cube about half a centimeter in size and blackish-silver,” says Schröter. “Our colleagues at the Max Planck Institute for Chemical Physics of Solids in Dresden produced it using a special process. In addition to the researchers in Dresden, scientists in Great Britain, Spain and the U.S. were also involved in the current study. The aim of the Dresden researchers was to achieve a tailor-made arrangement of the atoms in the crystal lattice.

In a crystal, each atom occupies an exact space. An often cube-shaped group of adjacent atoms forms a basic element, the so-called unit cell. This repeats itself in all directions and thus forms the crystal with its typical symmetries, which are also visible from the outside. However, in the aluminium-platinum crystal now investigated, individual atoms in adjacent elementary cells were slightly offset from each other so that they followed the shape of a spiral staircase, a helical line. “It thus worked exactly as planned: We had a chiral crystal,” explains Schröter.

Chiral materials can be compared to the mirror image of the left and right hands. In some chiral crystals, the imaginary spiral staircase of the atoms runs clockwise, and in others, it runs counter-clockwise. “We researchers find chiral materials very exciting, because mathematical models make many predictions that exotic physical phenomena can be found in them,” explains Vladimir Strocov, a PSI researcher and co-author of the current study.

And this was the case with the aluminium-platinum crystal the researchers investigated. Using SLS X-ray and photoelectron spectroscopy, they made the electronic properties inside the crystal visible. In addition, complementary measurements of the same crystal at the Diamond Light Source in Oxfordshire, England, allowed them to see the electronic structures on its surface.

These investigations showed that the special crystal was not only a chiral material, but also a topological one. “We call this type of material a chiral topological semimetal,” Strocov says. “Thanks to the outstanding spectroscopic abilities of the ADRESS beamline here at SLS, we are now among the first to have experimentally proven the existence of such a material.”

The world of donuts

Topological materials came into the public eye with the Nobel Prize in Physics in 2016, when three researchers were honoured for their investigations into topological phases and phase transitions.

Topology is a field of mathematics that deals with structures and forms that are similar to each other. For example, a ball of modeling clay can be formed into a die, a plate, or a bowl by merely pressing and pulling—these shapes are thus topologically identical. However, to obtain a donut or a figure eight, you have to make holes in the clay—one for the donut, two holes for the 8.

This classification according to the number of holes and further topological properties have already been applied to other physical properties of materials by the scientists who were awarded the Nobel Prize in 2016. Thus, for example, the theory of so-called topological quantum fluids was developed.

Quasiparticles inside, Fermi arcs on the surface

It is the combination of these two phenomena, the chirality and the topology of the crystal, that leads to the unusual electronic properties that also differ inside the material and on its surface.

While the researchers were able to detect the Rarita-Schwinger fermions inside the material, complementary measurements at the English synchrotron radiation source Diamond Light Source revealed other exotic electronic states on the surface of the material: four so-called Fermi arcs, which are also significantly longer than any previously observed Fermi arcs.

“It is quite clear that the Rarita-Schwinger fermions in the interior and these special Fermi arcs on the surface are connected. Both result from the fact that it is a chiral topological material,” says Schröter. “We are very pleased that we were among the first to find such a material. It’s not just about these two electronic properties: The discovery of topological chiral materials will open up a whole playground of new exotic phenomena.”

Researchers are interested in new materials and the exotic behaviour of electrons because some of them could be suitable for applications in the electronics of the future. The aim is—for example with quantum computers—to achieve ever denser and faster storage and data transmission in the future and to reduce the energy consumption of electronic components.