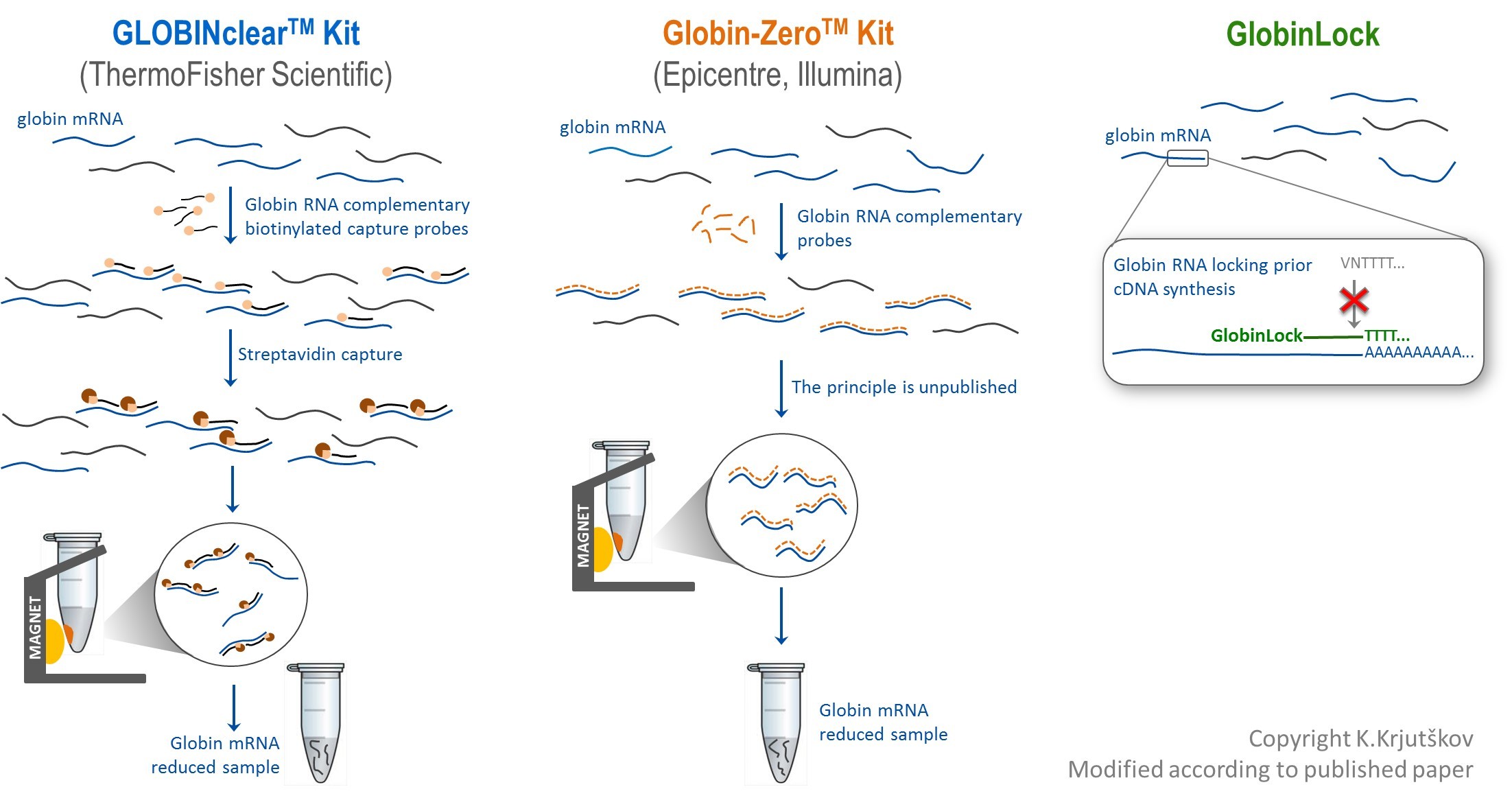 Comparison of two available globin mRNA reduction methods (GLOBINclearTM and Globin-ZeroTM) based on manufacturer’s product information from official webpages. In addition, GlobinLock principle is depicted on right side. Modified according to doi: 10.1038/srep31584 Source: Kaarel Krjutškov.

Scientists at Karolinska Institutet in collaboration with Estonian Competence Centre on Health Technologies have developed a new gene expression analysis method to widen the usage of blood in biomarker discovery and analysis. Their paper is published in the journal Scientific Reports.

Blood carries cells that provide biomarkers for a number of applications. Blood as a type of liquid biopsy is widely used in clinical research due to its ease of sampling and its rapid dynamics: the majority of the cells are erythrocytes that carry oxygen, causing 50 – 80 per cent enrichment of globin RNA molecules among all blood RNA. This high prevalence of globin complicates blood related gene expression biomarker studies, causing technical bias and leaving biologically relevant molecules undetectable.

According to the researchers the study reveals for the first time the detailed methodology – GlobinLockTM – how to overcome a limitation in blood sample analysis caused by erythrocytes, which complicates any downstream biomarker identification or tracking from blood. The published and patent pending assay minimizes the needs of reagents and sample material, which makes it an effective and robust tool.

“The globin reduction rate of GlobinLock is sufficient for any applications. It reduces the globin prevalence from 63 per cent before to five per cent which makes it an effective tool for biotechnology companies as an additive to their kits, said Dr Kaarel Krjutškov, the leading author of the study from both Karolinska Institutet and Estonian Competence Centre on Health Technologies.

The new method consists of a pair of short synthetic DNA strands that silence majority of globin RNA molecules by highly specific binding. The strands are introduced to purified RNA sample, and according to the researchers, being effective immediately after RNA denaturation and add only ten minutes of incubation time to the whole complementary DNA synthesis procedure. The locking DNA molecules bind specifically at globin RNA poly-A site that is needed for further analysis. Therefore the globin RNAs are “locked” prior downstream manipulations and are unavailable to cause technical biases in blood RNA biomarker applications.

“We show that globin locking is fully effective not only for human samples but also for widely used animal models, like mouse and rat, cow, dog and even zebrafish”, said professor Juha Kere in who’s laboratory the invention was created at Karolinska Institutet.