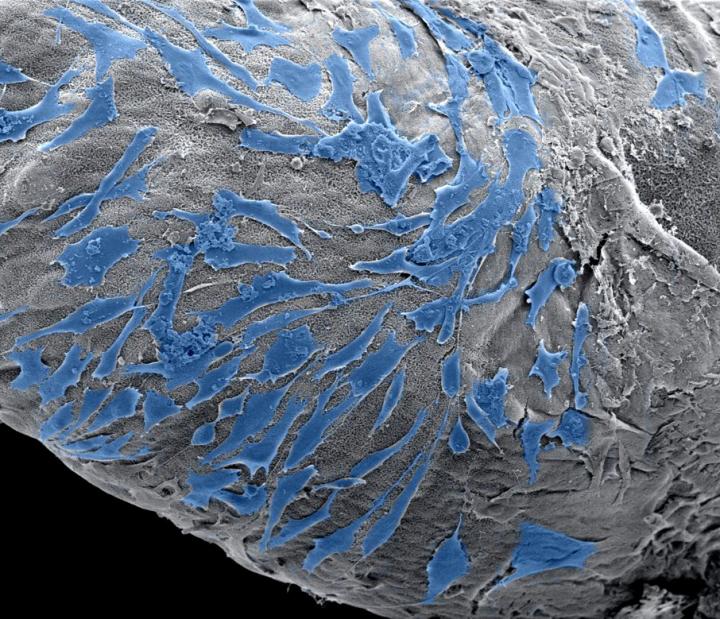 These are cells spreading on the outside of a PA based scaffold. Credit: Clara Hedegaard

These structures are embedded in an ink which is similar to their native environment and opens the possibility to make them behave as they would in the body.

This allows the researchers to observe how cells work within these environments and potentially enables them to study biological scenarios such as where cancer grows or how immune cells interact with other cells, which could lead to the development of new drugs.

The structures can be manufactured under digital control and with molecular precision which also enables the researchers to create constructs that mimic body parts or tissues for tissue engineering or regenerative medicine.

The study is published in Advanced Functional Materials.

Professor Alvaro Mata, from Queen Mary’s School of Engineering and Materials Science, said: “The technique opens the possibility to design and create biological scenarios like complex and specific cell environments, which can be used in different fields such as tissue engineering by creating constructs that resemble tissues or in vitro models that can be used to test drugs in a more efficient manner.”

The technique integrates the micro- and macroscopic control of structural features that printing provides with the molecular and nano-scale control enabled by self-assembly. Because of this, it addresses a major need in 3D printing where commonly used printing inks have limited capacity to actively stimulate the cells that are being printed.

PhD student Clara Hedegaard, leading author of the paper, added: “This method enables the possibility to build 3D structures by printing multiple types of biomolecules capable of assembling into well defined structures at multiple scales. Because of this, the self-assembling ink provides an opportunity to control the chemical and physical properties during and after printing, which can be tuned to stimulate cell behaviour.”