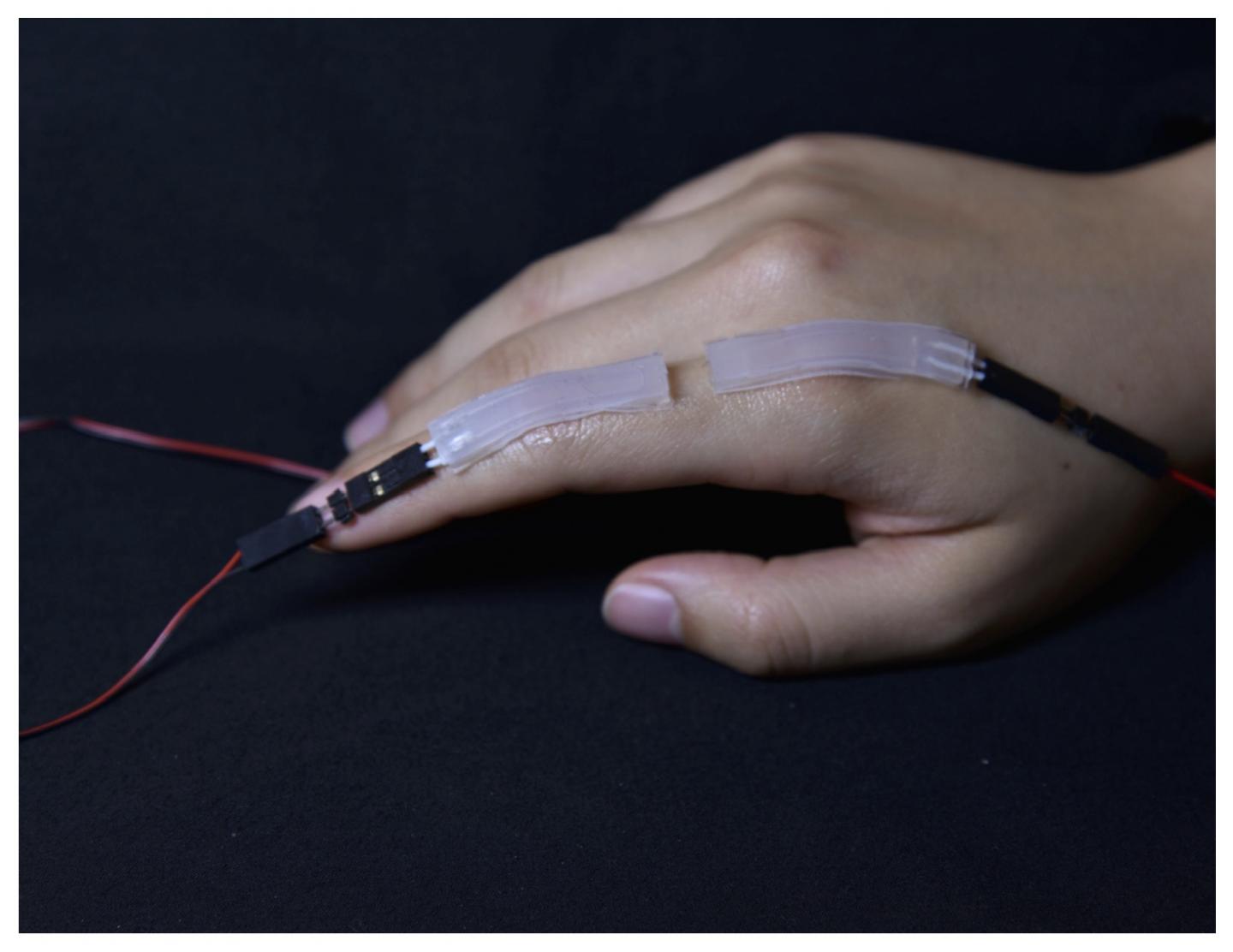 Safe, soft sensors on the top and tip of the index finger detect the movements, strain and force of the finger while performing different activities, such as flexing and extending the finger and picking up weights and boxes. (Image/video courtesy of Siyi Xu, Daniel M. Vogt, and Andreas W. Rousing/Harvard SEAS)

A comfortable, wearable sensor could provide an easier way to diagnose developmental disabilities in small children.

Harvard researchers have created a soft, non-toxic wearable sensor that attaches to the hand and measures the force of a grasp and the motion of the hand and fingers, key measurements in deciphering possible developmental problems.

The key component in the sensor is a non-toxic, highly conductive solution made from potassium iodide and glycerol.

“We have developed a new type of conductive liquid that is no more dangerous than a small drop of salt water,” Siyi Xu, a graduate student Harvard John A. Paulson School of Engineering and Applied Sciences (SEAS) and first author of the paper, said in a statement. “It is four times more conductive than previous biocompatible solutions, leading to cleaner, less noisy data.”

“Previous biocompatible soft sensors have been made using sodium chloride-glycerol solutions but these solutions have low conductivities, which makes the sensor data very noisy, and it also takes about 10 hours to prepare,” Xu said. “We’ve shortened that down to about 20 minutes and get very clean data.”

Often times prematurely born children develop neuromotor and cognitive development disabilities. These disabilities can be reduced if caught early through a series of cognitive and motor tests.

However, accurately measuring and recording motor functions in small children is very difficult.

The sensors were designed with young children in mind as the silicon-rubber sensor can sit on top of the finger and on the finger pad.

“We often see that children who are born early or who have been diagnosed with early developmental disorders have highly sensitive skin,” Eugene Goldfield, co-author of the study and an Associate Professor in the Program in Behavioral Sciences at Boston Children’s Hospital and Harvard Medical School and Associate Faculty Member of the Wyss Institute at Harvard University, said in a statement. “By sticking to the top of the finger, this device gives accurate information while getting around the sensitively of the child’s hand.”

In previous work, the researchers developed a device to capture motion in children, but the key to the new sensors is the ability to measure force, which is crucial in diagnosing neuromotor and cognitive developmental disabilities.

“Early diagnosis is the name of the game when it comes to treating these developmental disabilities and this wearable sensor can give us a lot of advantages not currently available,” Goldfield said.

The researchers will now try to scale down the device and test it with small children.

“The ability to quantify complex human motions gives us an unprecedented diagnostic tool,” Rob Wood, the Charles River Professor of Engineering and Applied Sciences at SEAS, Founding Core Faculty Member of the Wyss Institute, and senior author of the study, said in a statement. “The focus on the development of motor skills in toddlers presents unique challenges for how to integrate many sensors into a small, lightweight, and unobtrusive wearable device.

“These new sensors solve these challenges – and if we can create wearable sensors for such a demanding task, we believe that this will also open up applications in diagnostics, therapeutics, human-computer interfaces, and virtual reality,” he added.

The study was published in Advanced Functional Materials.