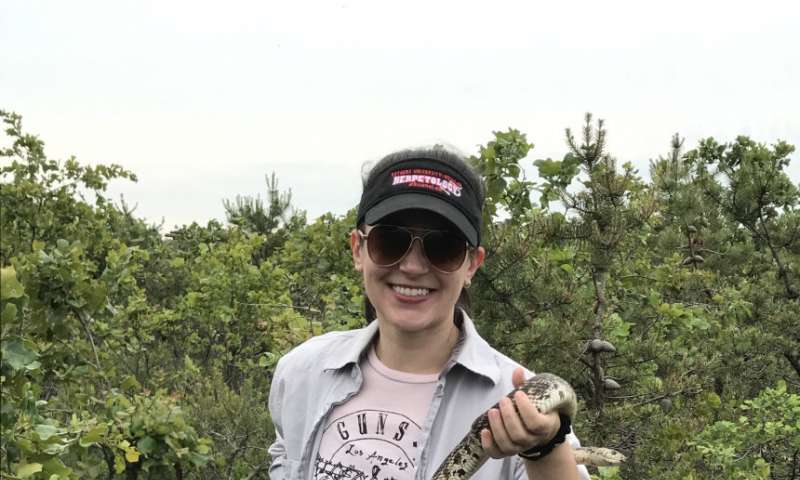 Samuel McDowell, the late herpetologist and professor at Rutgers-Newark, spent a good part of his life studying ground snakes in New Guinea. Forty years later, Sara Ruane – who joined the Department of Biological Sciences faculty last semester – was able to find evidence that the snakes McDowell studied were, in fact, a new species of reptiles that have been hiding in plain sight.

In research published in the Journal of Natural History, Ruane used DNA sequencing from five different genes, combined it with morphological information from preserved museum snake specimens, some of which McDowell examined in the 1970s, and discovered four new ground snakes.

"When I started exploring New Guinea snakes, his work really jumped to the forefront," said Ruane, an assistant professor and snake researcher. "I don't think I've in any way finished his work, but it is a nice continuation for sure and verifies some of the hypotheses he proposed."

Ruane says that the island of New Guinea is biologically megadiverse because of the wide variety of amphibians, birds, fish, mammals and reptiles but still remains one of the of least studied regions of the world.

The newly discovered species, part of the genus Stegonotus are typically , but not always, brown and grey in color and can be difficult to study because they are active when it gets dark. They are not as flashy as other snakes in the region, Ruane said.

"They live in pretty remote and to some extent poorly explored areas," said Ruane. "New Guinea also has some snakes that some people might give more attention to because they are more exciting, like the dangerous venomous snakes that are related to cobras and coral snakes."

This new discovery means that there are now 14 species, up from the 10 previously identified. Ruane thinks that number will grow.

"These snakes are likely major players in the New Guinean ecosystem," said Ruane. "And, of course, there are always human-focused reasons to care, like the development of human drugs that help control medical issues, such as diabetes, made from snake and lizard venoms."

Ruane and her colleagues named one of the species they discovered, Stegonotus derooijae, after a Dutch zoologist, herpetologist and curator at the Museum of Zoology at the University of Amsterdam who was not able to pursue higher education in Amsterdam because she was a woman.

Petronella Johanna Nelly de Rooij, who died in 1964 at age 78, had to leave Amsterdam and go to Zurich to study and earn her doctorate degree. She published two dozen scientific papers and the most complete work on reptiles in the Indo-Australian region.

"The field of herpetology has long been dominated by men," said Ruane who credits her grandmother for her interest in snakes because she encouraged Ruane's early interest in wildlife and took her on walks in the woods to explore. "But that is changing quite a bit. Every year when I go to conferences, I see more and more women."

Ruane plans to continue her work in New Guinea to study other neglected snakes. She is also working on a project focused on the squamates – lizards and snakes – of the New Jersey Pine Barrens, which will examine historical population size changes of these animals and can provide a better understanding of how these reptiles will respond to climate change in the future.