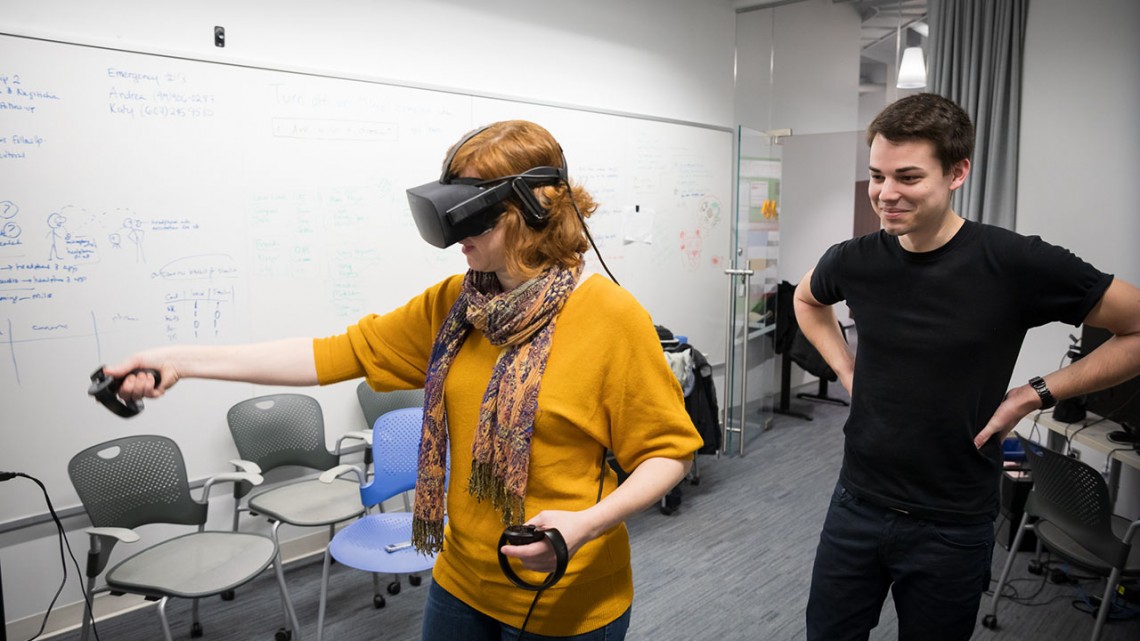 Jack Madden, doctoral candidate in the field of astronomy, watches as Andrea Stevenson Won, assistant professor of communication and director of the Virtual Embodiment Lab, uses a virtual reality simulator.

As part of a multi-phase study investigating the use of virtual reality (VR) as a teaching tool, Cornell University researchers found that while students were more interested in learning using VR,  actual learning rates were no different with VR than using traditional teaching methods such as hands-on activities and computer simulations.

Natasha Holmes, PhD, senior author on the study and the Ann S. Bowers Assistant Professor in the College of Arts & Sciences in physics at Cornell, said that the VR study began based on her curiosity as to what type of classroom activity produces the best learning environment.

“There is research out there that says that computer simulations and things like that can be as good as or better than learning from a more traditional, hands-on activity,” Holmes said in an exclusive interview with R&D Magazine. “When you go into a lot of cognitive science research there’s ideas that having something physical and tangible in front of you and being able to embody the experience improves learning a ton. Part of the idea is that we had this hypothesis that virtual reality might provide the best of both worlds with the embodiment of a real hands-on activity combined with the controllability of a desktop simulation.”

Holmes, who had never used virtual reality before the study, felt that VR would be a good tool to teach the different Moon phases, as Oculus Rift headsets and hand controllers could enable otherwise impossible views.

“The idea is that it can be a confusing topic and could be one that could really benefit from having some 3D perspective,” said Holmes

To test the effectiveness of VR in the classroom, Cornell University undergraduates were randomly selected to participate in one of the three learning methods—using either VR tools, computer simulations or a hands-on approach.

The VR group was able to move forward and backward in time and change the virtual moon’s orbit from different viewing positions accompanied by accurate star maps and relative motions for the celestial bodies.

In the traditional hands-on learning method group, students used a light to mimic the sun and a short stick with a ball on top to represent the moon, with the student serving as the Earth holding the stick. They then held the ball at arm’s length and spun it to create an illumination pattern that imitates the moon’s different phases.

The group using the desktop simulations were able to manipulate their viewing position and planar perspective, as well as the progression of time that was synchronized with the bodies’ orbits and rotation.

The instructions and quiz questions were as closely matched to one another as possible in all three learning modes.

“At the end of the activity we let the students try all the different modalities so they can see everything,” she said. “Our actual assessment of student learning shows that there wasn’t a difference in how students learn from either of the three systems. The optimistic side is that if the learning is as good as the other modalities but the students are really excited about it then maybe that is something worth investing in. That is a debatable topic at this point given the cost.”

Holmes said an informal survey at the conclusion of the semester revealed that about 78 percent of the students preferred the VR learning method.

While VR was well received, Holmes said there are some cost and scalability issues that need to be resolved before VR can be implemented on a wider-scale. Holmes also explained that it would be difficult to develop simulations that cover all the different subjects she plans to teach about over the course of a semester.

“One of the challenges is making sure there is actually simulations that are useful for the various education topics,” Holmes said. “We had a team of students designing the various moon phase’s simulations, which took a fair amount of time and expertise to make happen. Coming up with a virtual reality simulation for every possible topic that I am going to teach in a semester is certainly going to be tough.”

Another challenge is that not every student was completely comfortable using these tools. Of the 22 percent of students who said they did not enjoy using virtual reality to learn, Holmes said the most common reasons cited was that they found the system either overwhelming or confusing.

However, she expects as the price of VR systems continue to decrease, the systems improve and the use becomes more mainstream, those complaints will be reduced.

Holmes credited Andrea Stevenson Won, an assistant professor of communications and the director of the Virtual Embodiment Lab and a co-author of the study, with showing her the ropes of what VR is capable of doing.

Stevenson Won said in an interview with R&D Magazine that at this point it is too early to tell the best way to utilize VR in education.

“From my perspective, since I’ve been working with VR for a while, I’ve seen a big expansion in its use,” she said. “I don’t think it necessarily should be used for everything, there are limits to what it should be used for. Some of the concerns we have is that when it is used for some broad purpose like education it doesn’t work well for everybody.”

While it is debatable how much VR can truly be used to improve the learning process, Holmes said there is nothing like the first time you immersed in a new, virtual world.

“The first time that you put on the headset and you are standing above the Earth and watching the moon rotate around you, being in that space is just really cool and it is way cooler than looking at it on a desktop simulations,” she said. “The idea of the immersion at this point I don’t think can be beat and the idea at this point is how we can capitalize on that for learning.”

After a successful initial foray into VR, Holmes said she hopes to learn more about the best way to utilize it with other hands-on learning activities, while also figuring out how to best use the tools for collaborative and group learning.