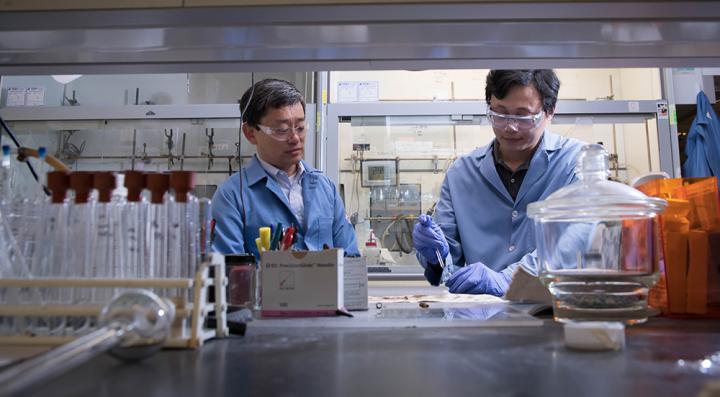 One of the biggest challenges facing synthetic chemists is how to make molecules of only a particular “handedness.” Molecules can come in two shapes that mirror each other, just like our left and right hands. This characteristic, called chirality, can be found in biological molecules like sugars and proteins, which means that drug designers often want to develop medicines that are only left- or right-handed. It’s a bit like designing the ideal handshake.

Chemists have developed ways to separate the left- and right-handed forms, or enantiomers, of a molecule–such as molecular sieves that permit the passage of just one form. Another more sought-after technique is to create, from scratch, only the desired enantiomer and not its mirror-image form. In a new study, published October 18 in Nature, Gregory Fu, Caltech’s Norman Chandler Professor of Chemistry, and his team do just that, demonstrating a new method for making molecules with carbon-carbon bonds (virtually all pharmaceuticals contain carbon-carbon bonds) in only one of their handed forms, while using abundant, inexpensive materials.

“This method can make the discovery and synthesis of bioactive compounds, such as pharmaceuticals, less expensive and less time-consuming than was possible with previous methods,” says Fu. “A drug developer could use our method to more easily make libraries of candidate drugs, which they would then test for a desired activity.”

In the new report, the researchers demonstrate that they can run their hand-selecting reactions using inexpensive materials, including a nickel catalyst, an alkyl halide, a silicon hydride, and an olefin. Olefins are molecules that contain carbon-carbon double bonds, and they are commonly found in organic molecules. In 2005, Bob Grubbs, the Victor and Elizabeth Atkins Professor of Chemistry at Caltech, won the Nobel Prize in Chemistry for coming up with a method for swapping atoms in and out of olefins at will, a finding that led to better ways to make olefins for industrial purposes.

The Fu team created various classes of compounds with a specific chirality, including molecules known as beta-lactams, of which the antibiotic penicillin is a member.

“The nickel catalysts work like the mold of a glove, shaping a molecule into the desired left or right hand. You could, in theory, use our method to more easily make a series of penicillin-like molecules, for example,” says Fu.

Molecules with different handedness can have surprisingly different traits. The artificial sweetener aspartame has two enantiomers–one tastes sweet while the other has no taste. The molecule carvone smells like spearmint in one form and like caraway in the other. Medicines too can have different effects depending on their handedness. Ibuprofen, also known by one of its brand names, Advil, contains both left- and right-handed forms, but only one version is therapeutic.

In the future, Fu and his colleagues plan to further develop their method–in particular, they want to be able to control the handedness at two sites within a molecule rather than just one, providing drug designers with even more flexibility.