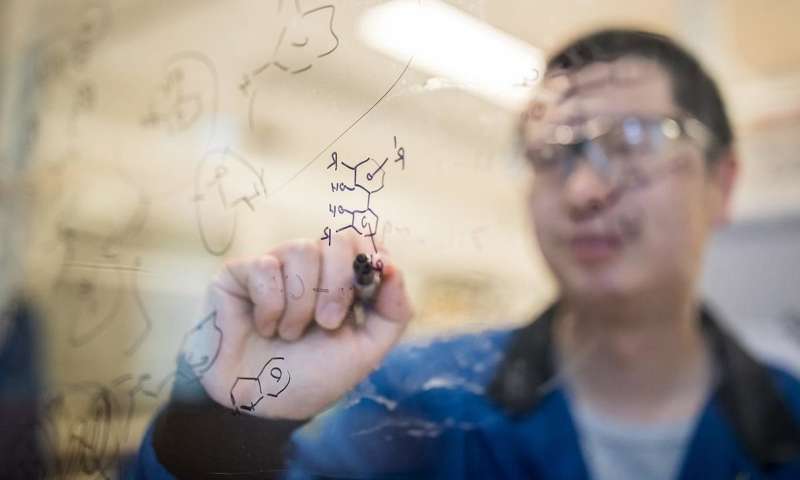 UChicago chemists, including postdoctoral researcher Jun Zhu, above, devised a method to crack certain carbon-carbon bonds, which could someday let us make chemicals from plants instead of oil. Credit: Nancy Wong

A breakthrough by chemists at the University of Chicago may one day open possibilities for making chemicals from plants rather than oil, by creating a new method to crack certain tough carbon-to-carbon bonds.

A great number of chemicals in the natural and industrial world have backbones made of carbon-on-carbon bonds. These are regularly carved up during processes to make new useful molecules. But a particular subset of these bonds is very stable—and thus difficult to crack open. Chemists would like to discover new ways to cut and rearrange such bonds; a library of such knowledge is key to finding valuable new chemicals or more efficient or greener ways to make known ones.

For example, lignin—a molecule found in plants and trees—has long been eyed as an alternate source of the chemicals made from crude oil, which are used to make plastics and fertilizers. But it contains a lot of these especially tough carbon-carbon bonds. “If we had an efficient method to cleave those bonds, we could potentially make full use of lignin as a sustainable alternative to petroleum,” said Guangbin Dong, professor of chemistry at UChicago and coauthor of the study.

The problem is that carbon-carbon bonds are often connected with particularly strong non-polar links. If they could be put into certain configurations that allow a close interaction with a metal catalyst, they can be broken. But before the study, there was no known catalyst that could break such unstrained, non-polar bonds in lignin.

Dong, along with postdoctoral researcher Jun Zhu and graduate student Jianchun Wang, devised a new method to use a metal hydride catalyst to crack the bonds. The metal hydride acts as an active intermediate, inserting itself into the carbon bonds and then grabbing onto hydrogen as well.

The method itself isn’t suited to commercial use, but it provides proof of concept for the future, the scientists said.

“This provides an opening for further study of such methods,” said Dong. “Fundamentally, we want to know the limits of what kind of carbon-carbon bonds could be activated.”